Despite her outstanding training and commercial successes in a number of bands, Anna Gosteli hid her light under a bushel far too often.The 35-year-old resident of Solothurn is now stepping into the limelight and has found her too long-awaited musical identity, thanks to all of her many experiences. The 2019 Get Going! grant gave her the necessary financial independence. Text by guest author Rudolf Amstutz 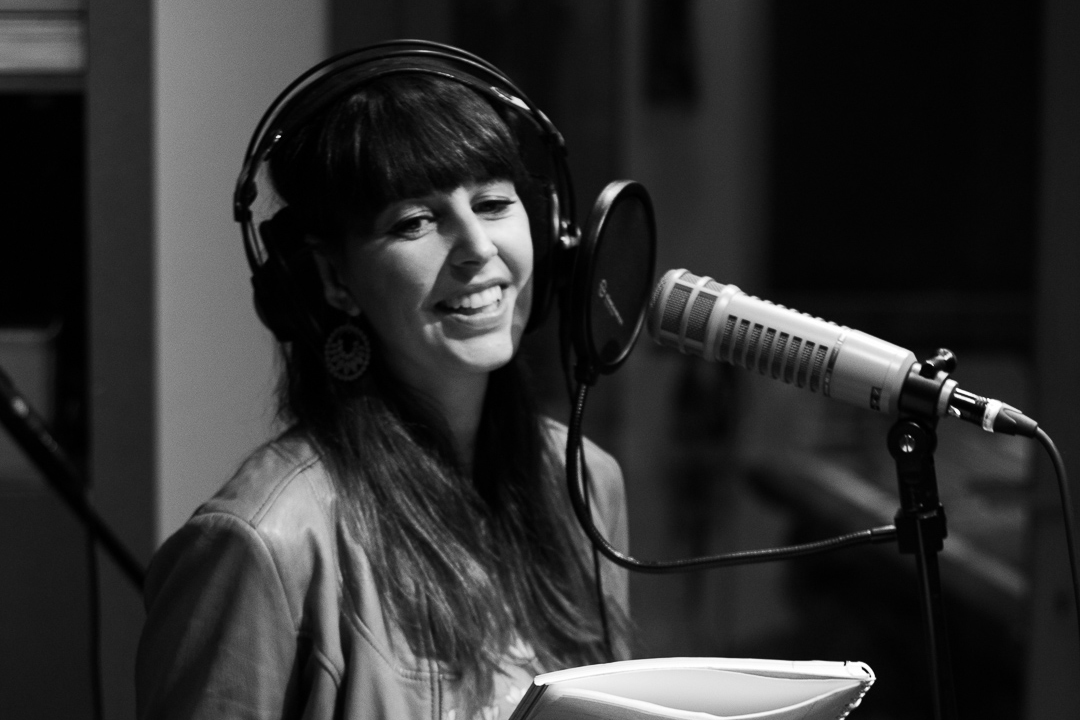 Parts of a puzzle like mosaic pieces – before they are put together, they shimmer in all the colours under the sun, but: the full picture is just not there. The correct arrangement, the right sequence of events which gives the finished picture its identity, is missing. “Jack of all trades and master of noneˮ is the way Anna Gosteli describes the state of affairs in which she found herself for years. And this is despite how these individual parts of the puzzle can be seen or heard: piano lessons at the age of 7, then the clarinet, followed by the school choir. At home in the Vorarlberg region of Austria, her mother played the guitar and her father the saxophone. “Even as a child I came into contact with all sorts of musical genres, with golden oldies and pop songs, and in our house there were always instruments available to play.ˮ

At the age of 14, she moved to Switzerland. Yet another piece of the puzzle, followed by more new pieces at regular intervals. When she was 21, she joined the Basel-based art-pop collective, The Bianca Story. Nothing seemed to stand in the way of a stellar career. Appearances at the Deutsche Oper Berlin, recording at Abbey Road Studios in London, however: “In the beginning I was the timid one in the band,ˮ the 35-year-old comments today, quickly adding: “This was entirely something I felt myself, and had nothing to do with the guys in the band, who always treated me as an equal.ˮ In spite of Gosteliʼs international success, this extremely talented singer was always the second voice. Combined with her reserved nature, she was left with the feeling that there could be more to her than meets the eye.

Her liberation began when she attended the Jazz School in Basel. Composition with Hans Feigenwinter, singing with Lisette Spinnler and harmony lessons with Lester Menezes. She is able to laugh about it today, but “at that time I was moved to tears when an irritated Lester once again pointed out to me that what I was doing was boring. My singing tended to be ʼtoo sweetʻ.ˮ Ultimately, this love-hate relationship turned out to be an important driving force in her breaking out of fixed roles and listening to her inner voice. Slowly but surely, the parts of the puzzle that had been collected over the years seemed to be fitting together. A feeling of certainty grew that a bigger, more coherent picture was possibly hidden inside her.

Along with Fabian Chiquet of The Bianca Story, she founded Chiqanne. Working together, they created great pop songs with depth. “Suddenly, I was writing lyrics in German and standing at the very front of the stage.ˮ But the decisive step in completing the puzzle only appeared as a result of the album, “Dr Schnuu und sini Tierliˮ, with a collection of songs for children, and most importantly, for their parents as well. Like so many things in her varied career, this was not planned. “I never know where things will take me. But somehow that can also be a way of doing things,ˮ she laughs.

It happened at Christmas, when Anna, now the mother of a six-year-old son, was looking for presents for the children of her friends. “And because I was really short of money at that time, I wrote a song and gave each child a verse.ˮ After the song about “Poultryˮ, came “Biber (Beaver)ˮ, which she gave to the film composer, Biber Gullatz, by way of thanks for a stay in his Berlin apartment, when she was frequently cooperating with him on television film soundtracks. “Only then did the idea come to me of writing a collection of childrenʼs songs.ˮ

It was behind these actual songs that almost all of the musical experiences that Gosteli had gathered throughout her career were hiding, and which suggested that the puzzle would become part of a glittering oeuvre. Thanks to lots of humour, but also immense psychological depth, these songs show off Gosteliʼs talents as a lyricist, whilst the music – which she performed on stage in collaboration with guitarist, Martina Stutz, – reflects her stylistic journey from golden oldies to pop songs and ultimately jazz.

“Iʼm currently bursting with ideas,ˮ says Gosteli, who teaches singing at the Guggenheim in Liestal, as well as leading a “Female Band Workshopˮ for “Helvetiarocktˮ along with Evelinn Trouble.And, last but not least, she is starting to bring the puzzle nearly to completion in the newly established Kid Empress band. “At last,ˮ states Gosteli, “Iʼve found three musical kindred spirits. We make decisions together and without having to make any compromises.ˮ

The “Schnuuˮ and genre-crossing sound of Kid Empress already clearly indicate that the initial “Jack of all trades and master of noneˮ is being condensed into an independent identity. “The Get Going! grant gives me the necessary financial breathing space at just the right time to be able to immerse myself in this new, creative adventure.ˮ And at this point, she beams all over her face once more.

FONDATION SUISA started awarding new grants in 2018. Under the heading of “Get Going!ˮ, creative and artistic processes that do not fall within established categories are given a financial jump-start. Each year, our Portrait Series profiles recipients of Get Going! funding. The invitation to apply for 2020 expires at the end of August.

Marcel Oetiker: “I often get inspired when I am travelling” | plus video – At the Zurich station, Hardbrücke, trains rush past, screech in the bends, and groan when starting up and when braking. But Marcel Oetiker has not chosen this as a meeting point because such sounds inspire some artists to take a creative flight of fancy. Read more