Covid-19, digitisation, climate crisis: Musikexport in extraordinary times. Experiences and thoughts on the subject by Marcel Kaufmann, responsible at FONDATION SUISA for its presence abroad and the export promotion. 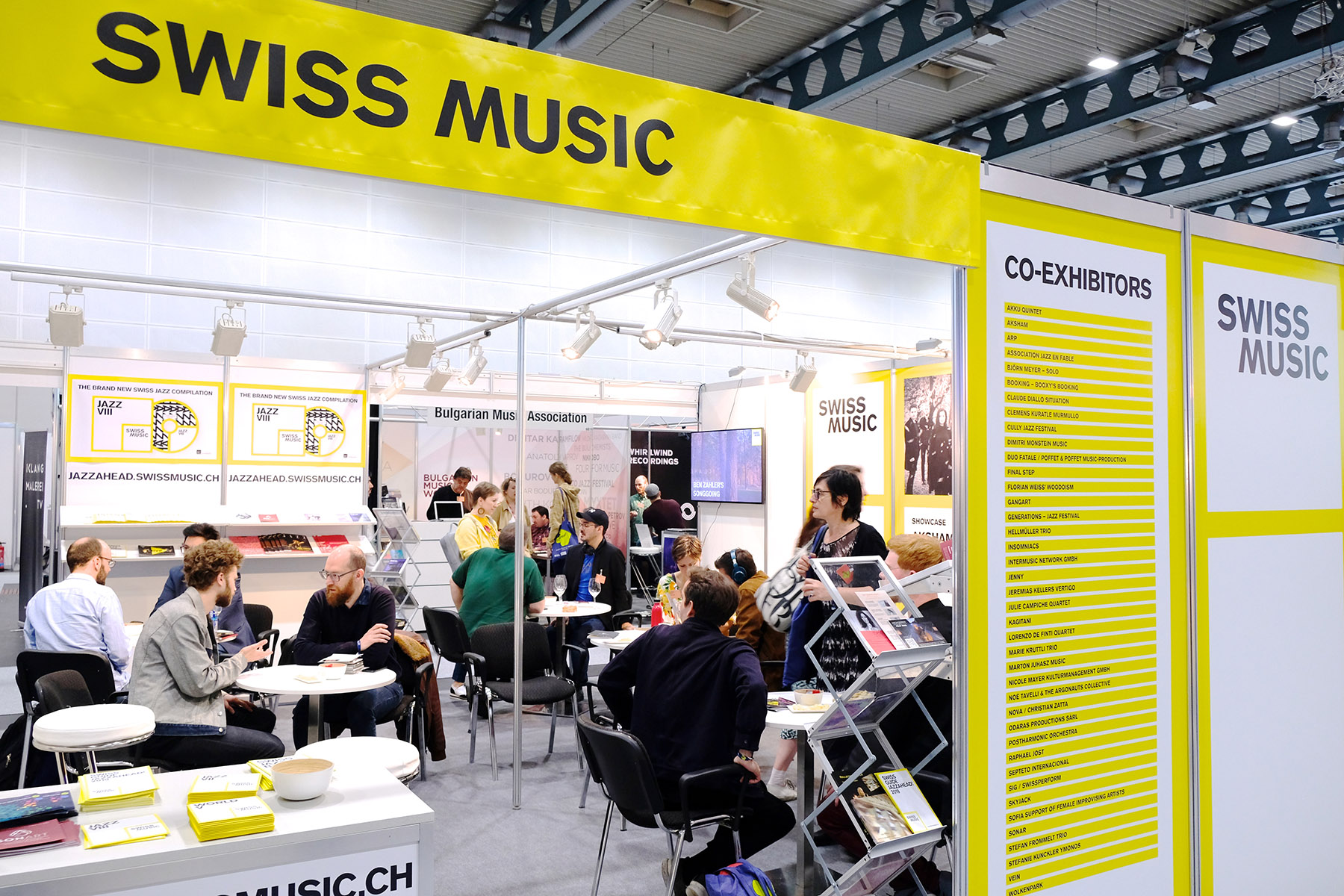 Will there ever be a back to “normal” times? The Swiss joint exhibition stand at the jazzahead! Bremen 2019. (Photo: Marcel Kaufmann)

Since the internet revolution of the 90ies, the value creation on the music market shifted to a large part towards the live sector. Concerts became the most important income stream for many musicians. One of the consequences was that numerous showcase events were launched. Artists could perform in front of international experts during short live concerts. This was done in the hope that they would get bookings in bigger clubs or festivals or taken under contract by international agencies. Together with various partners, the FONDATION SUISA supports the export endeavours of the domestic creators. For many years, the foundation organises Swiss networking platforms at international conferences and events.

This well-functioning system of travel, performances and shaking hands was brought to an abrupt halt by the pandemic. It was more or less overnight that music creators lost a large portion of their income, and at the same time also their export paths.

What now? How can they bridge this period? And what would happen if the “normality” we all love so much is never to return?

FONDATION SUISA took part in many pilot projects last year, tested chat tools, supported showcase videos via streams and negotiated potential new subsidising avenues with event organisers and promoters. “An interesting experience”, “a welcome transitional solution”, but surely “no surrogate for a real live performance”: This is our verdict at the end of 2020, in conformity with a large group of music creators and event organisers.

“Networking via the internet is, to many, still a very strange concept.”

The pandemic entailed cancellations of practically all physical face-to-face music conferences and exhibitions in 2020. Some, like Midem or WOMEX tried to hold virtual events. Back then, the planning insecurity was still too high. It was impossible to even consider being able to organise concerts again in the near future. In line with this, promoters booked much less artists during such online events than for physical events with a face-to-face audience. The ambiance of a live concerts can also not be recreated on a 1:1 level. And networking via the internet is, to many, still a very strange concept.

The most recent virtually held jazzahead! in Bremen confirmed these findings to a large degree. Ok, so it was easier to establish contact among those accredited for participation via the internet than on heaving exhibition grounds. In the absence of a collective feeling, however, you soon turn into a lone fighter. The real success of the Swiss presence at the biggest jazz conference in the world this year will only emerge in a few weeks and after surveys and conversations. In the past, it was possible to draw conclusions on the last day of the conference.

The two Swiss live acts in the official showcase programme of the jazzahead! chose different approaches: The formation The True Harry Nulz performed live in Bremen in front of a handful of journalists which at least applauded after each song which could be heard in the live stream. The showcase of the Luzia von Wyl Ensemble, however, had been pre-produced without an audience in the Moods in Zurich and then streamed. The silence between the pieces and the lack of feedback leave the performers in a vacuum.

“We must constantly create new scenarios, remain open and critically assess our own impressions.”

Now that in the face of the vaccination campaigns there is finally a light at the end of the tunnel again, it would be easy to fall into a state of hopeful anticipation and do away with the online world as a pure temporary solution. In a time, however, where our entire work life is significantly changed by the digitisation, many questions arise: Is there possibly more export potential in the online world as previously assumed? Can we even afford the old “normal” in times of a global climate crisis which will survive each pandemic? A crisis which is going to have a lasting effect on generations of future music creators and take many opportunities away from them?

There are still no conclusive answers to all of these questions. The most important developments do not take place online but in our heads. And these developments take more time than the technological ones. Until then, we must constantly create new scenarios, remain open and critically assess our own impressions. The most important factor is: listen to the music creators. Because their art must find its way across the country borders, also in the future. For them, FONDATION SUISA will continue to actively monitor and influence the developments in the music export world.