SUISA can report a very successful financial year 2016. The result reflects an all-time high regarding the income from domestic copyright exploitation. In the Cooperative Society’s history of more than 90 years, this is a record sum in terms of remuneration that is due for distribution. The average cost coverage deduction remains low – about CHF 88 per CHF 100 of the income collected can be paid out to authors and publishers that are entitled to receive such remuneration. Text by Andreas Wegelin 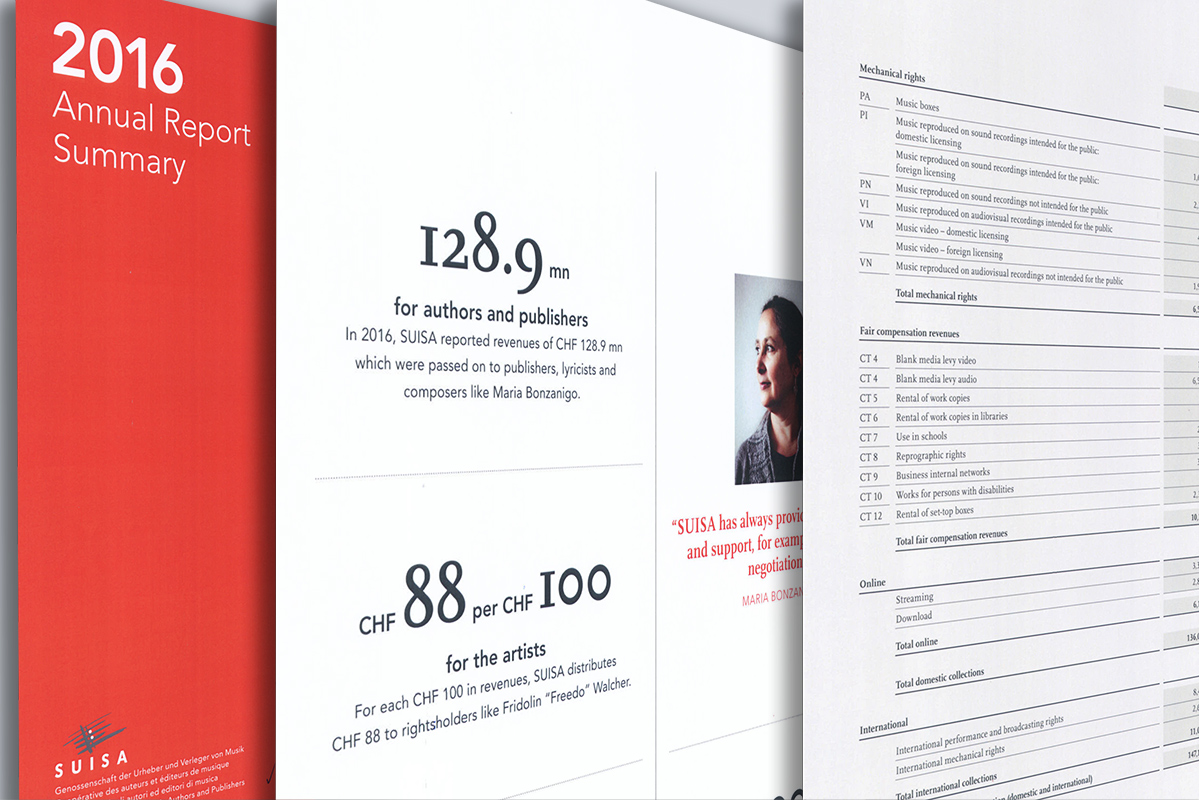 SUISA is going to pay authors and publishers remuneration totalling CHF 128.9m for financial year 2016. That is the highest ever distributable amount in the Cooperative Society’s history which spans more than 90 years. (Photo: Manu Leuenberger)

The best business yield achieved by SUISA previously, in 2008, has thus been topped by the results of 2016. The income from the usage of copyright in musical works in Switzerland and the Principality of Liechtenstein have never reached such high levels before. As a consequence, more than CHF 128m can be paid out to domestic and international authors and publishers entitled to receive such remuneration. That is the highest amount in our Cooperative Society’s history which spans more than 90 years.

Regarding the licences for the distribution of music recordings, the trend continues to move away from physical sound recordings towards online exploitation. Regarding online music exploitation, downloads are increasingly replaced by streaming. Remuneration for private copying, regarding Tariff CT 4, has also grown. The latter can be attributed to the expansion of the storage capacity of devices (smartphones, tablets).

While the costs for rights management have slightly increased, the proportion of this increase compared to the income remains low. The result is that the applicable cost deductions for settlements to rightsholders entitled to receive a payment are a very reasonable 12.37%. About CHF 88 per CHF 100 will therefore be paid out by SUISA to authors and publishers.

Successful negotiations – still a lot of work to do for SUISA

Such positive annual results are a proof of successful negotiations for tariffs and terms and conditions of use, and of reliable customers and business partners. It also shows that music exploitation is on the rise and SUISA can negotiate and enforce licences for music in relation to new technologies accordingly.

Particularly with regards to internet usage, there is still a lot of work to do. SUISA is increasingly managing online rights for cross-border usage directly. This sector is expected to turn into an important pillar of our work for our members.