The rules for the distribution of licence fees for broadcast music in SRG TV programmes and in private TV broadcasters’ programmes are undergoing some partial changes. The relevant amendments in SUISA’s distribution rules affect distribution categories 1C, 1D, 2C and 2D. 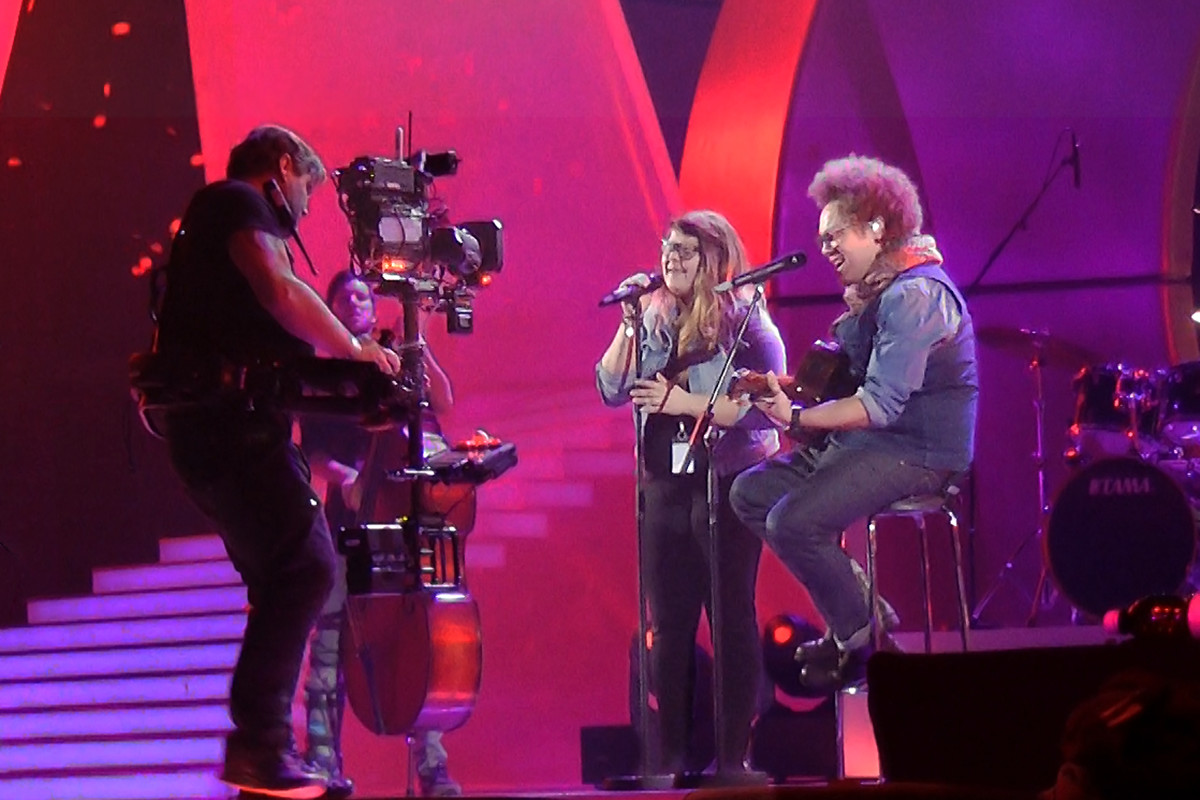 The winner of the talent show, Tiziana, presents the song “Hold Me” during a TV programme. She is accompanied by SUISA member Marc Sway (r.), who composed the piece together with Sekou Neblett. Both song writers receive royalties for the broadcast of their music on TV via SUISA. (Photo: Manu Leuenberger)

When Swiss TV stations transmit music, composers and lyricists of the broadcast music subsequently receive money from SUISA for it. Tariff A for SRG broadcasts and CT S for the other (private) broadcasters determine how much broadcasters have to pay in order to be able to play music. There are also rules determining how the money is distributed: They are laid out in SUISA’s distribution rules.

Aims of the changes to the distribution rules

Said distribution categories, which govern the distribution of income from the SRG TV broadcasts and private TV stations, have now been revised. The main aims of these changes were:

Music duration instead of film duration

By changing the distribution rules, the significance of the music in films is established independently of the duration of a film. A distinction is no longer made by film duration as it had been the case previously (longer or shorter than 60 minutes). As this relates to the calculation of authors’ remuneration for music, it is only the duration of the music that should be instrumental. By taking the music duration into consideration, a film with more music automatically obtains more money than a film with less music.

A comparison with sister societies abroad has shown that they also use the duration of the music, not the film, as connecting factor for the distribution. The falling away of the 60-minute-limits constitutes a simplification of the distribution process and leads to a neutral weighting of the film score – as it will be independent of the film duration.

The term “jingle” shall be defined as follows, in line with SUISA’ distribution rules: Music which serves the recognition of broadcasters, station networks and programmes or the provision of a background or backdrop. Idents, loops, trailers, billboards etc., background music, e.g. for information programmes, sport and quiz shows, music for test cards, audiotexts and still images, and now also opening and end titles for series and logos also fall under this category.

Such “jingles” often serve the purpose of spectator retention and are intensively repeated during the TV transmissions. The repetitive character of jingles is taken into account in terms of the distribution by separately allocating the significance of this music in broadcast programmes.

The weighting of jingles for the distribution shall now be based on a standard factor of 0.25. Compared to the previous regulations, the factor does not decrease proportionally to how often the jingle is broadcast. The new standard factor corresponds to the previous level for the 13th to 52nd broadcast. Compared to the old tiered model, the new factor is lower than previously for the 1st to the 12th broadcast. However, it is higher for all repetitions beyond the 53rd broadcast. By changing the distribution rules, the multiple usage of music such as is the case for idents to daily broadcast news programmes will be weighted more heavily.

Impact on the distribution and settlements

These distribution rules changes can entail shifts in the pay-outs to composers and publishers. Stage or tiered models, as were previously applicable with the respective changing factors per number of broadcasts or film duration in minutes, are always subject to a certain arbitrariness and might have to be constantly adapted as a consequence. The new weightings that have now been introduced with standard weighting rates allow a linear development of the remuneration and therefore lead to a fairer overall distribution result.

The change of item 3.3 paragraph 2 of the distribution rules has been approved by the IPI with its decisions dated 19 November 2015 as well as 15 December 2015. It applies to the income from 2016 and shall have an influence in the distributions from 15/12/2016 onwards for the first time.