Polo Hofer receives the FONDATION SUISA Prize 2017 in the category “lyrics author”. Christoph Trummer writes in his guest contribution about the factors distinguishing the works of the award winner from others. 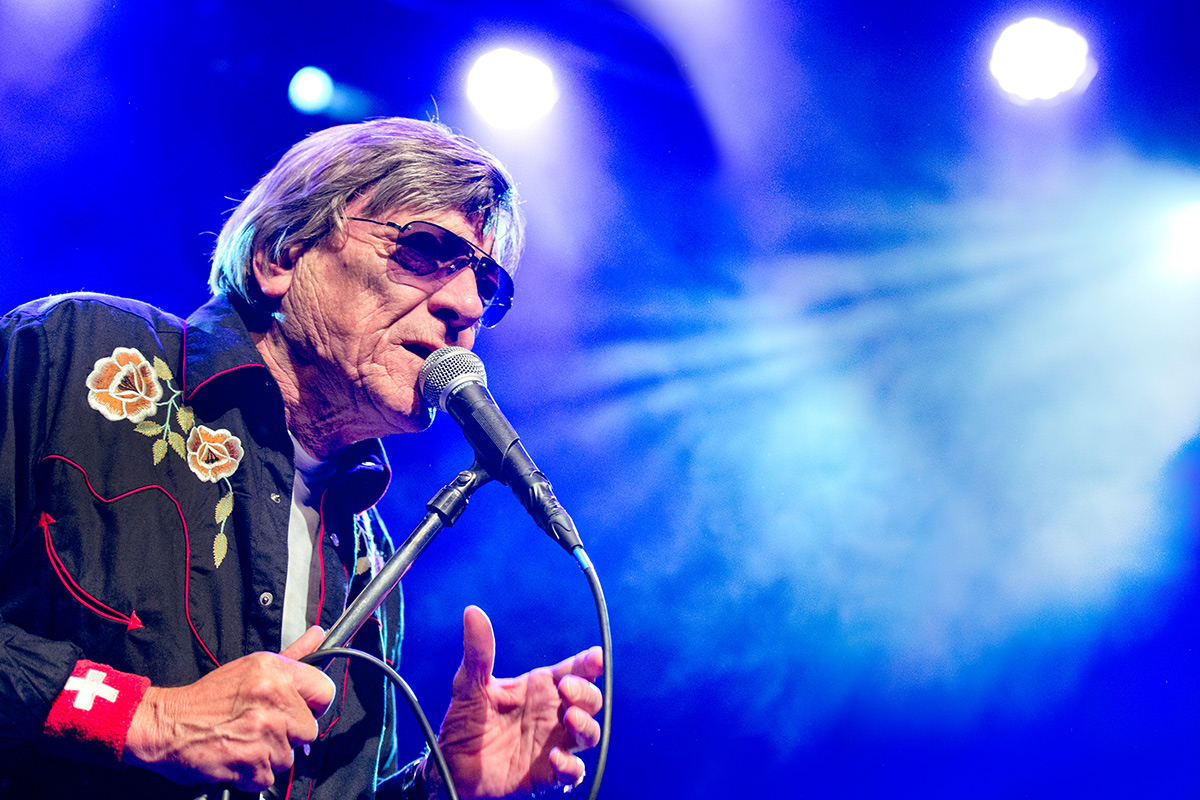 Polo Hofer, winner of the FONDATION SUISA Prize 2017 has found his way into popular culture and has translated rock and roll as a way of life for the German-speaking part of Switzerland. (Photo: Patric Spahni)

If you wanted to be brief, you’d say: The FONDATION SUISA Prize is a recognition award for outstanding creations. In 2017, it will be awarded to a lyricist for the first time. Polo Hofer was nominated for the award. What else did you expect the jury should do?

Of course, we’ll gladly dedicate more than just these few words to this worthy award winner and his works.

Those who were born after 1970 and grew up in the German-speaking part of Switzerland, are likely to find it hard to imagine their schooldays, youth and life in Switzerland as such without Polo Hofer and his songs and lyrics. Some of his works, ranging from “Bin i gopfriedstutz e Kiosk” (“Am I a blimmin’ kiosk”) to “Bim Sytesprung im Minimum e Gummi drum” (“For that bit on the side as a minimum a condom”) have turned into one-liners; you cannot possibly imagine everyday language being without them. Even those whose parents don’t even own a Polo Hofer CD can sing along to “Alperose”.

These lyrics are now part of popular culture, in the German-speaking part of Switzerland, for sure. Since his early days with the band Rumpelstilz, Polo’s discography has been serving as a means to tell the story of a rather eventful Swiss history. The “Summer 68”, when (apparently) it was the done thing to travel to Kabul to smoke weed. The wild 70ies, years of upraise, with Rosmarie to Spain, free love next to the “Teddybär” (“Teddy Bear”). The dark side of dreams in the form of a “Silbernaadle töif im Arm” (“A silver needle deeply plunged into the arm”). And already then, dulled by consumerism, in full swing with the “Waarehuus Blues” (“Warehouse Blues”).

Polo’s lyrics are, sometimes, explicitly political: “Da isch nüt vo Grächtigkeit / So wie’s i dr Verfassig schteit” (“Um WAS geits?”) (“There is no justice / as it’s written in the constitution”, song: “WHAT’s this about?”). He does, however, also narrate world history as a personal story, when an old love affair finally gets a chance as the Berlin wall comes down (“Wenn in Berlin bisch”) (“When you’re in Berlin”). Plus, he criticises society with role prose, whose poetry stems from conversations at the regulars’ table in the pub, for example when the farmer’s son of the Lochmatt sums up the empty promises of a life in the bright city lights: «Lah mi vergässe bim rote Wy» (“Let me forget with a glass of red”). That’s popular in its very essence, but it also has side effects.

Sometimes the loud role of Polo National smothers the fact that he also has other qualities as a lyricist. For example, when he ponders about his own mortality in “Im letschte Tram” (“In the last tram”) or when he negotiates the literal sense of God, all the world and his brother in “I dr Gartebeiz vom Hotel Eden” (“In the garden pub of the Eden Hotel”) without getting lost in intellectual deliberations.

Rock and roll – translated for Switzerland

Some of Polo Hofer’s great songs are congenial translations: Tom Waits’s “Jersey Girl” into “Meitschi vom Wyssebüehl” (“Girl from Weissenbühl” – a Berne suburb), Todd Snider’s “Alright Guy” into “Liebe Siech” (“My dear chap”), and Dylan’s “Leopard-Skin Pill- Box Hat” into “Schlangelädergurt” (“Snake leather belt”). With that, you find out about another one of Polo’s various roles, which make him so significant (not only) for music performed in dialect in Switzerland: He is a translator. Not only a translator of song lyrics but one of the most important translators of rock and roll and popular culture into our culture, into our customs and habits.

Polo Hofer has managed to turn desires, but also the lustfulness of the young with its pubescent obscenities, the rebellion against a stale and settled system, in brief: the rock and roll way of life for the German-speaking part of Switzerland into sound. D’Stüehl ewäg, mir sy giggerig u wei schwoofe (Get the chairs out of the way, we’re in the mood and want to dance). He was inspired by, and found some of his topics in the rock and roll catalogue of legends and brought it to Switzerland: We would probably not get into a ride with Bobby McGee on the highway, but hitchhike with Rosmarie from Paris to Gibraltar. Wyssebüehl is closer than New Jersey.

Polo Hofer as a central figure of our story has opened doors through which many others could pass, even if they didn’t even know his music at all. And now he receives an award for this work. As such, the FONDATION SUISA Award 2017 is a kind of “Lifetime Achievement Award”. We congratulate you from our hearts!

Christoph Trummer won the FONDATION SUISA Prize 2011 in the category “Singer/Songwriter”. Our guest author was born in 1978 and grew up in Frutigen (BE). Apart from his musical activities, he is President of the Association for Music Creators Switzerland.