At SUISA’s General Assembly on 19 June 2015 in Fribourg, Marie Louise Werth and Zeno Gabaglio were elected to the Board of SUISA. They replace Monika Kaelin and Massimiliano Pani who retired from the Board and had received a heartfelt farewell with a big thank you for their contributions in the supreme committee of SUISA. Who are the new Board members? An introduction to the newly elected members in the interview and the short biographies. 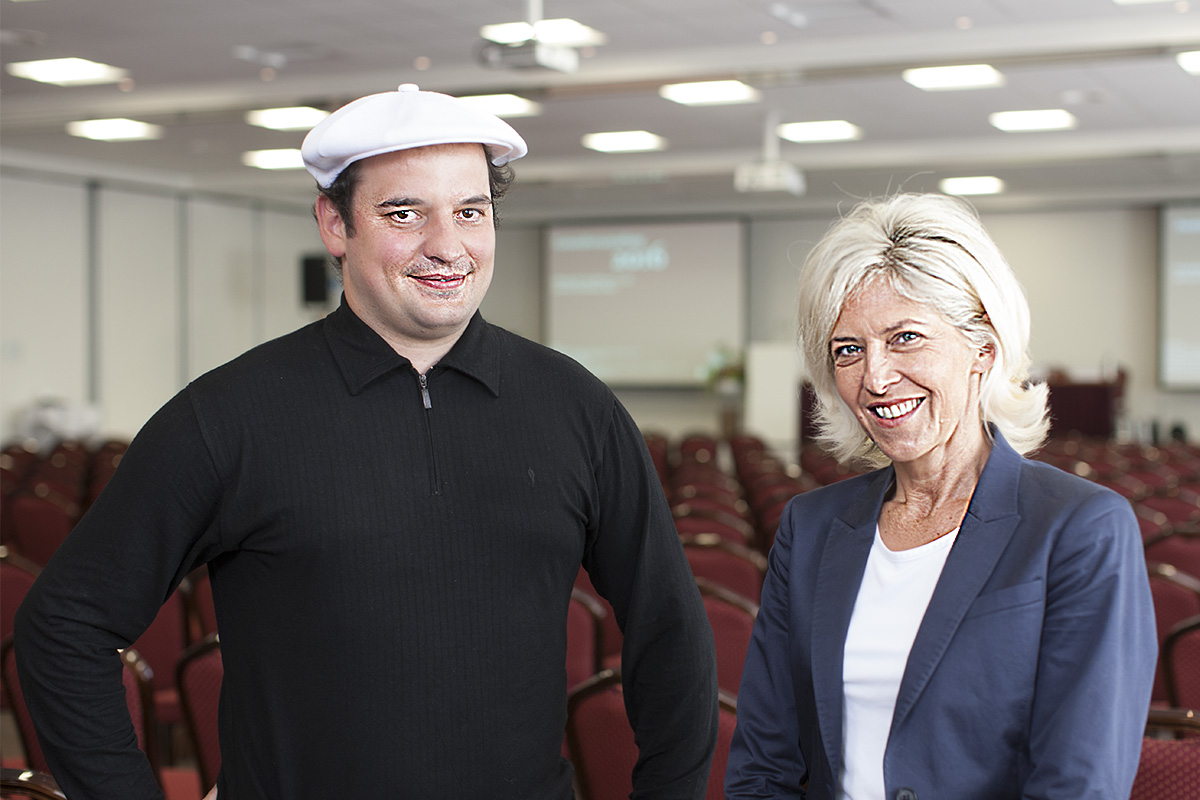 Marie Louise Werth and Zeno Gabaglio after their election to the Board of SUISA during the General Assembly of the cooperative society in 2015 in the hotel “NH Fribourg”. (Photo: Robert Huber)

What is your motivation to contribute to the SUISA Board?
Art is the purest form of love. It is immortal and dedicated to pleasure. Enough reasons to meet it with respect and to serve it with a lot of lifeblood. With this in mind, I am very much looking forward to the new challenges – and duties as a SUISA Board member.

What kind of knowledge and experience do you bring to the table for your Board activities?
I have spent the last 20 years as a member of the Distribution and Works Committee;
they were very educational and interesting. As a thorough-bred musician with over 30 years of stage presence, I was able to collect valuable experience which I look forward to incorporate into my new role at SUISA.

What kind of topics do you expect will be closest to your heart as a SUISA Board member?
As a creator and artist, my central goal is the protection of copyright as well as a fair distribution of the due remuneration to each member for the “intellectual property” that SUISA has been entrusted with. Cultural promotion funds in general as well as a healthy transparency – and positive grassroots behaviour of the SUISA vis-a-vis the public is also close to my heart.

Which piece of music would you have liked to have composed yourself and why?
The ingenious composition “Happy Birthday to you” / “Good morning to you” of the Hill sisters Mildred J. and Petty Smith is something I would have loved to have put to paper myself – I think there is hardly any other song that is tirelessly being played day in, day out, worldwide, and is celebrated like this one, and that has the wonderful power at the same time to release emotions in a jiffy.

What is your motivation to contribute to the SUISA Board?
For those who believe that man can today and in future express himself – his joy, his pain, his thoughts – with music, the role of SUISA is and will remain of fundamental importance: SUISA provides the best conditions and guarantees for the creativity of authors. To be a Board member at SUISA means to always keep this inevitable basic thought in the back of your head and to involve it actively when facing all sorts of challenges – of human, artistic or technological nature – which we are facing afresh on a daily basis.

What kind of knowledge and experience do you bring to the table for your Board activities?
I can draw back on diverse experience – from “pure” music to music for films or theatre pieces, from live performances to studio recordings. This also enables a precise projection onto certain topics but also a transversal approach in relation to the various specialised fields. After all, the core message is always the music and if you support music in general you cannot allow that anybody is excluded from it.

What kind of topics do you expect will be closest to your heart as a SUISA Board member?
One of the biggest challenges is to grasp the consequences of music online marketing, because, as we know, the physical disc decreases in quantity and loses significance whereas the online services for the dissemination and for the sale of music are proliferating in an uncontrollable manner. Other interesting topics are the principle of reciprocity with sister societies when it comes to paying out copyright royalties – I specifically think of the relationship with SIAE and Italy – and the somewhat unclear regulation of music productions (theatre, opera and musical) which are not primarily protected by SUISA.

Which piece of music would you have liked to have composed yourself and why?
This is a question which I would give a different answer to each year. At the moment, maybe it is due to the fact that summer is coming – I often listen to and greatly admire the piece “India” which was released in 1973 by the Brazilian singer Gal Costa: a rather moving melody and an incredibly rich arrangement. Apart from that you then discover that the duo Cascatinha and Inhana had already been successful with it during the Fifties and that – before their time – the composer of the piece, José Asunción Flores, wasn’t even Brasilian: a piece that was created in Paraguay with Spanish lyrics and a completely different musical sequence!