Place, time and space play a pivotal role in the works of composer, Beat Gysin. In his six-part “Lightweight building series”, he designs spaces specially for the music, enabling him to confront his audience with shifting tonal and spatial experiences. The second part of his elaborate project is due to be brought to fruition from 2021. FONDATION SUISA is supporting this project financially with Get Going! funding. Text by guest author Rudolf Amstutz 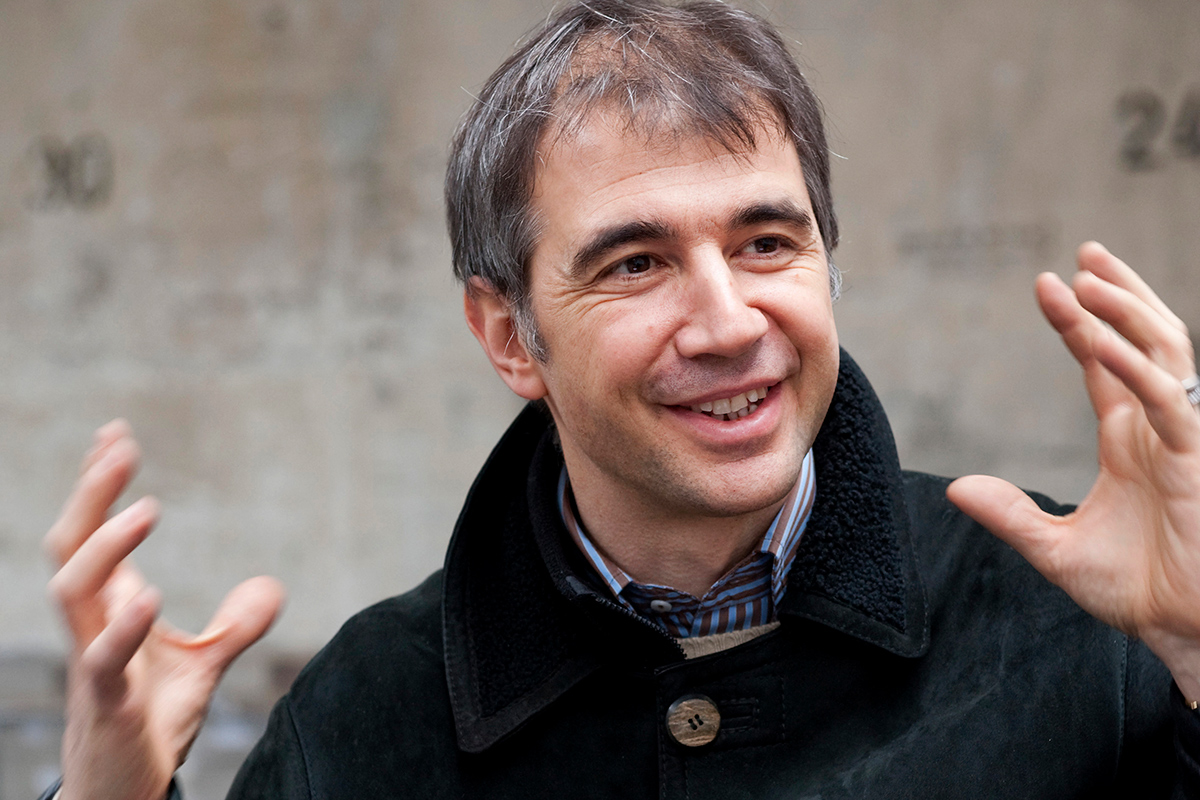 Chemistry and music: do they go together? What initially appears to be a contradiction in terms makes complete sense in Beat Gysin’s biography. Although he grew up in a family of musicians, Gysin took the decision to study chemistry as well as composition and music theory. The scientific approach and empirical evaluation of an experimental approach are just as important to him as the musical element. “I never wanted to be famous because of my music. I always wanted to find answers with my music and within it”, explains the 50-year-old Basel resident.

His catalogue of works is impressive. Even more impressive, however, is the way in which he brings his compositions to the performance stage. Gysin moves systematically beyond duplication and sound recording. Place, time and above all space are obligatory elements in his performance technique. In this respect, Gysin is far more than “just” a composer and musician. If you are to ultimately understand the Gysin Universe, you must firstly apply such definitions as researcher, architect, facilitator and philosopher.

“I am actually a philosopher at heart”, he adds. “It’s a matter of awareness, and I notice that the space in which music is performed has lost importance in its overall perception. Nowadays, people regard the music as being detached from its performance”, he adds and in so doing refers to a key point in his work: the systematic interplay between space and sound. “If you take one of my pieces out of the space, then this is almost as if you were creating a piano solo from an orchestral work. You know the notes, but do not hear the orchestra.”

With remarkable consistency, meticulousness and a passion for experimentation, in his many projects Gysin again and again plumbs the depths of the complex interplay between space, sound and the resulting perception of his music. The performance space becomes part of the artwork, which ultimately not only offers the audience a completely new sensory experience, but Gysin also repeatedly delivers new perceptions, in order to subsequently create yet another new approach to his next project. “I want to find things. And invent”, is how he describes what drives him artistically in an almost laconic manner. In this respect, he does not necessarily take centre-stage as the composer, but often “only” as the conceptual leader. In order to encourage an exchange of ideas, he set up the Basel studio-klangraum recording space and founded the ZeitRäume Basel festival.

“If you take one of my pieces out of the space, then this is almost as if you were creating a piano solo from an orchestral work. You know the notes, but do not hear the orchestra.”

Whether in churches with their varying acoustic properties, in empty waterworks with an echo lasting anything up to 30 seconds or in decommissioned mines where almost perfect silence prevails: Gysin keeps on discovering new spaces that can be mapped acoustically. And anywhere there is no natural space available allowing him to move forward, they are architecturally designed. The six-part “Lightweight building series” is not only one of Gysin’s key works because of the expenditure involved. It also represents the next logical step for him: creating spaces that can be transported. Here we are dealing with six abstract space designs, implemented as pieces of architecture in the form of pavilions, which provide unusual listening situations and therefore facilitate a new kind of awareness of the music. “Chronos” comprised a revolving stage like a carousel and in the case of “Gitter” the musicians were arranged “spherically” around the audience. Where “Haus” is concerned, sound space walks around existing houses were made possible and in “Rohre” (Pipes), which will take place shortly (world premiere in September 2019 in the inner courtyard of the Kunstmuseum Basel (Basel Museum of Art) as part of the ZeitRäume Basel festival), the audience and musicians meet each other in the literal sense of the word, in other words in pipes you can walk inside.

“In the concluding two parts from 2023”, Gysin comments, “I would like to investigate the question of mobile set-ups and their influence on hearing. In the case of one of the projects, the musicians and audience sit on little trolleys that never stop moving. Everything remains on the move and the space is constantly redefined. And as regards the last part, it is a question of a suspended space which implodes again and again like a balloon, but can then be re-inflated.” Such elaborate projects are not easy for an artist to finance. “We are dependent on support right from the initial conception, and that costs money”, he states in full awareness, adding: “the Get Going! grant from FONDATION SUISA is the perfect answer to this challenge. It is a kind of way of financing feasibility studies. Up to now this has not existed in this form.”

In times where culture has to be “eventised”, in that marketing experts pay more attention to form than content, the “Lightweight building series” also symbolises a kind of artistic counter-movement. “The advantage is that I, as the artist, conceive the event as a whole”, says Gysin, also commenting: “As a musician, today you are obliged in a world of sensory overload to deal with the location of the music, because it can no longer be understood if taken out of context.”