The composer and accordion player Franz «Fränggi» Gehrig receives the FONDATION SUISA Award 2016. The annual recognition award granted by SUISA’s music promotion foundation will be awarded in 2016 in the category “new, current Swiss folk music”. An interview with the 30-year-old award winner from canton Uri on the prize, his musical work and the attraction of old and new traditional folk music. Text/interview by Manu Leuenberger 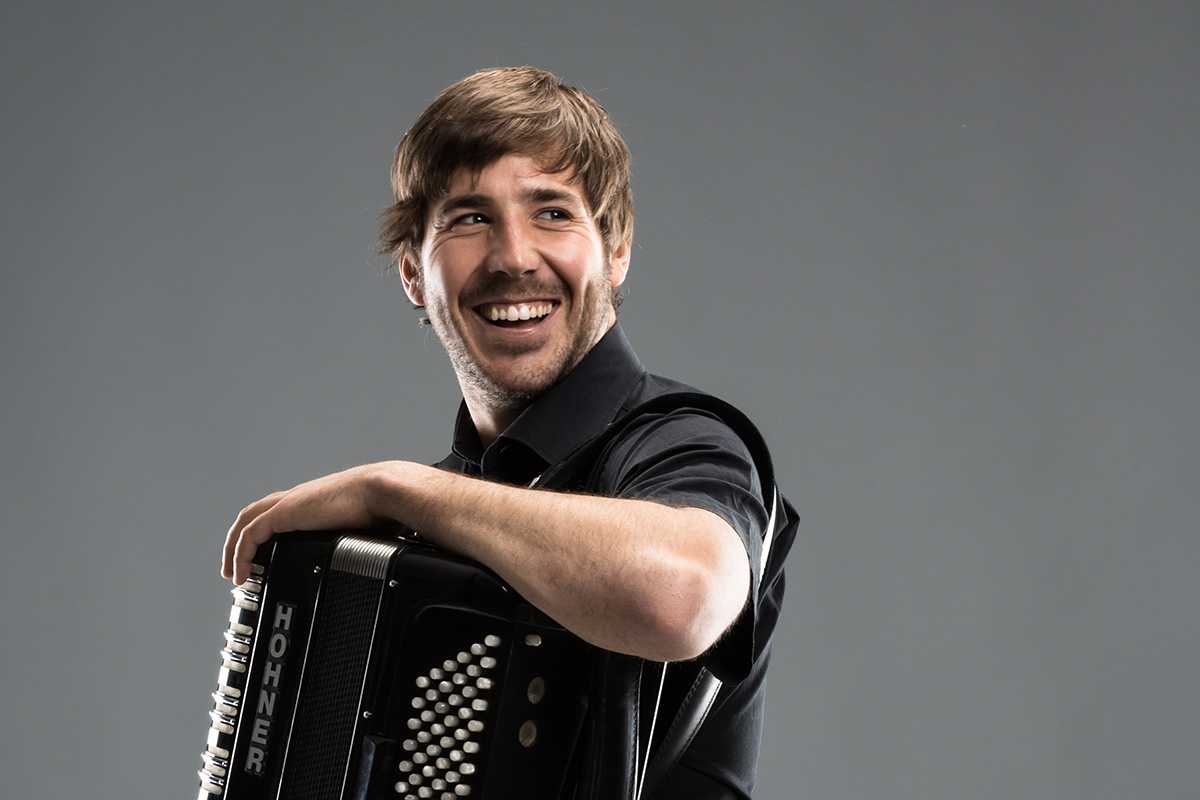 Fränggi Gehrig began playing the accordion as an eight-year-old. He studied accordion at the University of Lucerne, in the specialisation field Jazz with a focus on traditional folk music, and also composition. (Photo: Blatthirsch.ch)

Fränggi Gehrig, you are receiving the FONDATION SUISA 2016 award in the category “new, current Swiss folk music”. What does the award mean to you?
Fränggi Gehrig: The award came as a total surprise, as I had no idea when I entered the competition whether I had any chances. That’s why I am now even more happy and am really rather honoured that I am allowed to receive this award.

Many traditions are linked with folk music. What are the challenges if you wish to give folk music a new and current shape?
The most important thing, in my opinion, is never to forget your roots. You have to be careful that you don’t harmonise or rhythmically change melodies in a different way and say this is a new kind of folk music.
I believe that the connection between “traditional” and “new” material won’t work if you have not intensively experienced these traditions over a very long period of time. Especially traditional folk music is very difficult to learn. You need several nights out and the same amount of hours of practice home alone, in order to really be at home in it. It’s my opinion that you need this background in order to give folk music a meaningful new and current shape.

On the one hand, we can often hear you performing old traditional works with your accordion. On the other hand, you write proper compositions for bands such as Rumpus, Stegreif GmbH or the Alpini Vernähmlassig, where you also play. What attracts you to be a performer of old and a composer of new music at the same time?
I like the variety and the range of diverse projects in my work. As I said before, the traditional, “old” music is my base, that’s what I grew up with and I still love playing it very much. I believe it fits better in a cosy boozer where you can dance than in a concert hall. On the other hand, my slightly more complex compositions are more suitable for concert situations. The target audience is, in those cases, totally different, you practically move between two worlds. I like this kind of variety as it inspires me to continue doing both and sometimes combine.

Six years ago, you joined the Swiss Cooperative Society of Music Authors and Publishers. What benefits do you have from a SUISA membership?
I can have my works protected under copyright and benefit when my compositions are performed in public.

Have you already got an idea what you are going to use the FONDATION SUISA award money for?
It is rather likely that I will indulge in buying myself a good instrument which I have been ogling for a while.

Which of the many formations that you play with is currently or in the near future closest to your heart?
It is my aim to push my own quintet forward a bit in future. I also hope that I can continue to enjoy many amazing moments together with my formations and music colleagues.

The FONDATION SUISA award is a recognition award with which outstanding creative work is acknowledged which enriches the musical heritage of Switzerland. The award is granted by SUISA’s foundation for the promotion of music ((3)) each year in varying categories and carries a prize money of CHF 25,000. Most recent award winners were: Aliose (category “variety music), Gary Berger («instrumental/vocal composition and electronics), Ruh Musik AG (“Music publishing”), Trummer (“singer-songwriter”) and Michel Steiner and Willi Valotti (“Swiss traditional folk music”).