Toni Vescoli was born on 18th July, 75 years ago. 55 years ago, on 19th September, the musician from Zurich founded the legendary beat music band Les Sauterelles. It is celebrating its anniversary with a tour that starts during the “Beatles week” in Liverpool. At the same time, Toni Vescoli continues to perform with his dialect projects “MacheWasiWill” (dowhatilike), “imDUO” and “Toni VESCOLI&Co”. Text by guest author Markus Ganz 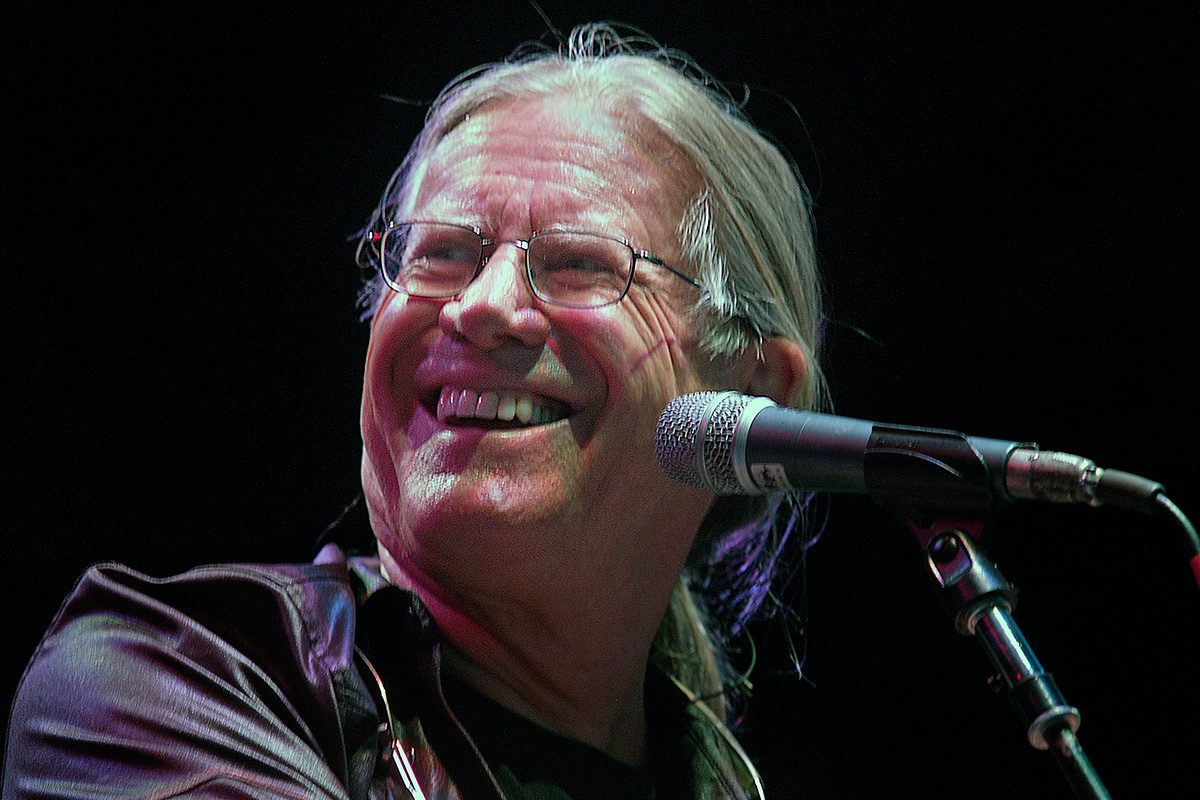 Five years ago, during the TV programme “Stars extra”, Toni Vescoli said – with an embarrassed grin on his face – that he did not succumb to the DOG, the delusions of grandeur. The show’s presenter Sandra Studer had asked him what it had been like to have led the Swiss charts in 1968 with Les Sauterelles (“Heavenly Club”), topping even the Beatles (“Hey Jude”). With his statement, the singer, guitarist and songwriter from Zurich has described his own character pretty well. While it is obvious that he is still enjoying to perform at concerts to this day, it is because of the music, and not the limelight.

Toni Vescoli was already “extremely” upset, back in 1964, that their impresario had invented an additional name for Les Sauterelles and even printed it bigger than the original band name on the placards: “The Swiss Beatles”. He did not wish to compare himself to other stars but be a creator in his own right. No later than in during the 1970s did he choose to follow his own path, irrespective of trends and hip places.

The path to beat music

His passion for music had, however, not been triggered by the English beat music artists but by American stars such as Johnny Cash and especially Elvis Presley. Toni Vescoli told the author of this article in a former interview that he had already played such kind of music at the end of the fifties. He did so standing on a table in a hip café in Zurich’s Niederdorf quarter, and on a larger scale, sometimes accompanied by a Dixie band. The changeover to beat music was initiated by the Shadows with their unique sound using electric guitars.

He needed a band to do this which is why he founded Les Sauterelles in 1962 whose entire history has been influenced by many changes in terms of the band members. The single “Heavenly Club” brought about the commercial peak in 1968. It was released in the majority of European countries as well as in the US and in Japan. Sometimes they played up to seven hours, performing in up to 350 concerts per year. Nevertheless the band was facing financial problems which is why Toni Vescoli placed an obituary in 1970 announcing: “Les Sauterelles are dead”. 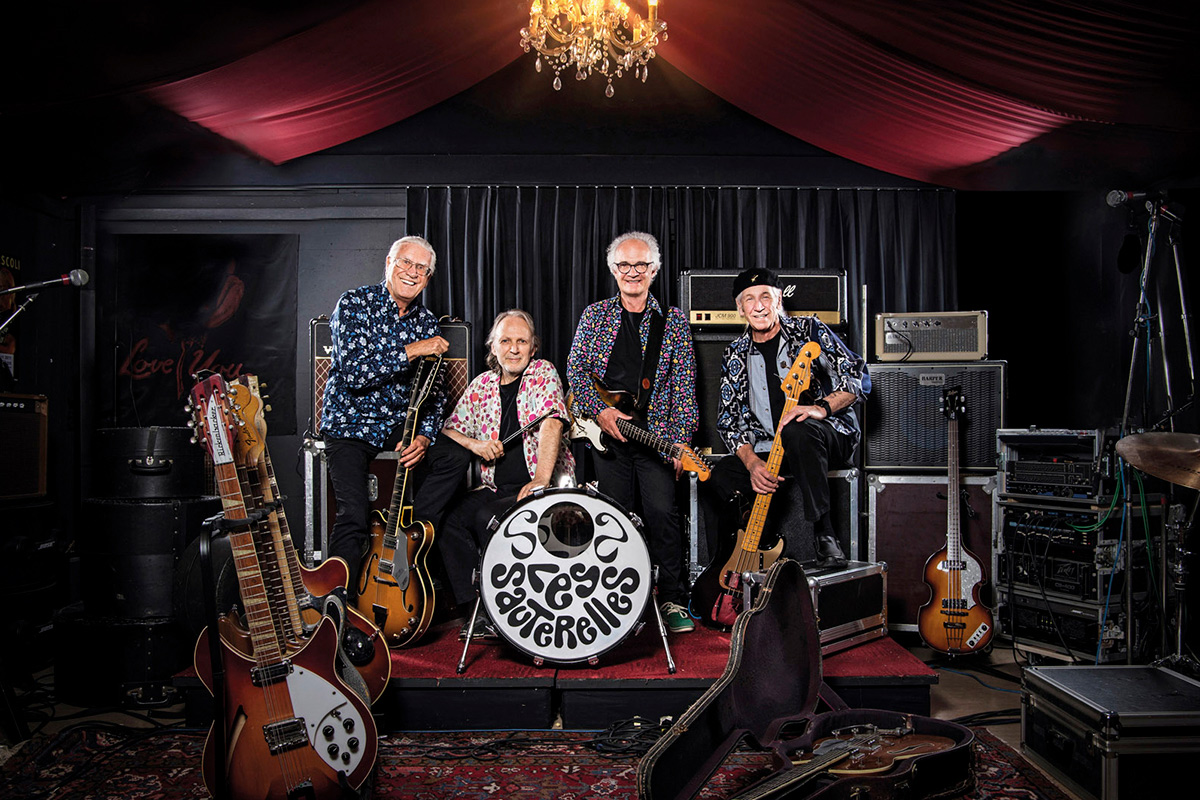 The legendary Swiss beat music band Les Sauterelles was founded 55 years ago. In 2017, the band is celebrating its anniversary with a tour that starts in Liverpool. (Photo: Gerhard Born)

It was folk music and especially Bob Dylan which lured Toni Vescoli back to American songwriting and music and influenced his solo career; his album “Bob Dylan Songs” (1993) is a tribute to this, featuring adaptations in the Zurich dialect of Swiss German. Folk music, together with the West Coast music of the 1970s was his entry point to his later mix of Americana music, Toni Vescoli explained in an interview. But his classic hits “Susanne” and “N1” had actually already been country music songs, bordering on bluegrass music.

In the early 1980s, Toni Vescoli returned to rock music, while influenced by Ry Cooder he became a fan of the accordionist Flaco Jimenez who then turned out to play on his album “Tegsass” (1999). Said Tex-Mex reminded him of his youth in Peru (between the age of four and nine), when they listened to Mexican folk songs on the radio. Together with Cajun music, this definitely rubbed off on the Americana album “66” (2008), in particular the lively single track “El Parasito”.

More important than the change in style was Toni Vescoli’s pioneering change to dialect in 1970. He had been instructed by the magazine “Pop” to write a song for the unveiling ceremony of a Wilhelm Tell monument. Instead of writing the lyrics in High German, he felt that Swiss dialect was more apt – and the song hit the right note with the public. He wrote more songs in dialect but his producer felt in 1971 that the time wasn’t right for that yet.

As a consequence, his first album in dialect was not released until 1974 – and Reinhard Mey’s cover version of the song “Susanne” got released before Vescoli’s original. His song “N1” with which he broached the issue of the ambivalent character of the N1 motorway (today’s A1) connecting Switzerland, is also rather striking. “N1 Du bisch e Schtraass wo-n i hass, aber irgendwie han-i Di gern” (N1 you’re a road that I hate but somehow I like you, too); he had already written a popular hit about traffic: “Scho Root” (Red lights again) (1975). 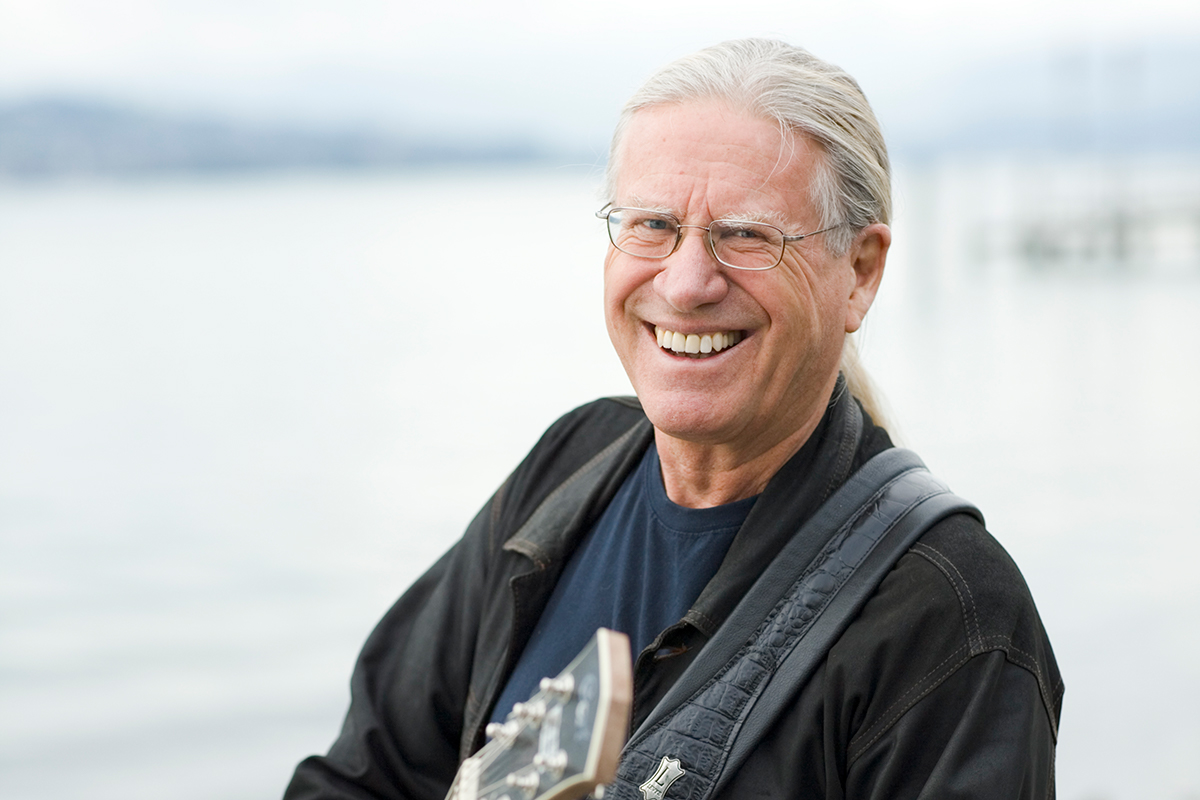 Modest and down-to-earth to this day: Toni Vescoli. (Photo: Plain)

What was unusual at the time was that Toni Vescoli combined his dialect lyrics with American music and thus broke open songwriter traditions. He did realise at the time that he was able to reach people much more directly by singing his songs in dialect. As a consequence, he developed his music into a style where the lyrics can be followed better. This led him to folk music which he could also perform on his own.

When he was consequently hired by a small theatre once, he realised that he no longer needed amplifiers and that an acoustic guitar was enough. He thus landed in a music environment which he had not been looking for but where he felt at ease: He continued to play without an amplifying system for nearly 18 years. At some point, however, he felt that this environment where people were “hanging on to his every word”, became too imposing for his liking. He wanted to play electric guitar again, and that’s what the song “Wäge Dir” (because of you) is about.

Words for a love song

The changeover to dialect had not been easy. If you sing in dialect, you have to be very careful about what you wish to sing, Toni Vescoli mentioned in an interview. It was not that easy to sing “ich liebe Dich” (I love you) – even if nowadays these words are not as embarrassing anymore, as the current world of dialect music shows.

Toni Vescoli broached the issue of the difficulty to find words for a love song with the title “Lady Lo” where he sings himself to the conclusion that: “öisi Schprach isch unbruchbar” (our language is useless). It was meant to be a love song for his wife, Toni Vescoli explained, but turned into a confession of failing with regards to finding the right lyrics. It all sounded kitschy and plump – and that is why he turned it into the theme of the song. Where words become useless for the purpose of expressing feelings, the question could be asked whether playing pure instrumental music might be the solution. Toni Vescoli replies to this and laughs that he simply wasn’t good enough as a solo guitarist to do just that.

Indeed, Toni Vescoli has not succumbed to any delusion of grandeur to this day. And he has continued to show that he does not have any fear of being in touch with young musicians or other styles such as hip-hop. In 2012, for example, he presented his interpretation of Baba Uslender’s “Baustellsong” (construction site song) in a show of the “Cover me” series on SRF television. Toni Vescoli has remained young in terms of his music – and may that be so in future!

Information and live dates: www.vescoli.ch (e.g. Performances with Les Sauterelles in Liverpool during the “Beatles week” from 25-28 August).