The Eclecta duo, made up of Zurich and Winterthur residents Andrina Bollinger and Marena Whitcher, experiments with sounds that defy established definitions and seeks out interdisciplinary exchanges with other art forms. FONDATION SUISA is supporting this project financially with Get Going! funding. Text by guest author Rudolf Amstutz 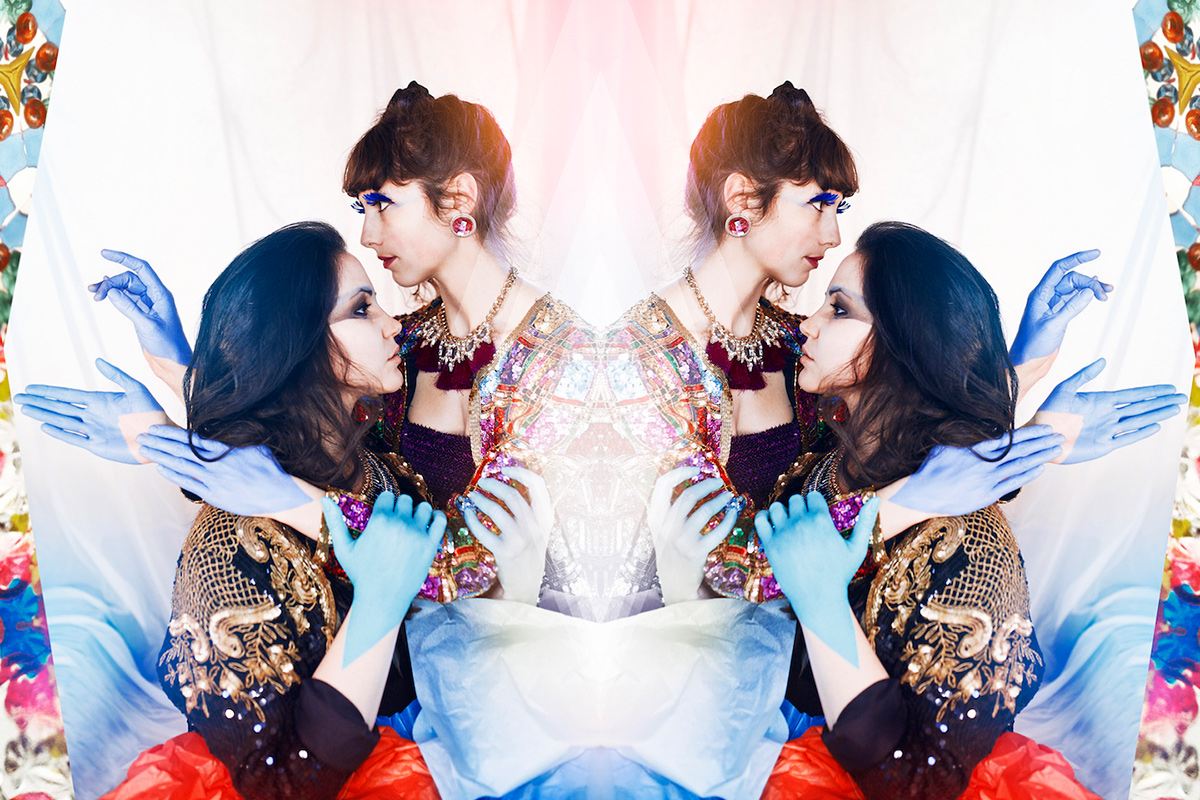 The place where verbal definitions of different arts implode; where stylistic pigeon-holes exist only as relics of past times; where everything can unfold freely and continually move into more and more new arrangements: that is precisely where Eclecta feel at home. Eclecta is a duo featuring Andrina Bollinger and Marena Whitcher, both of whom are solo artists, multi-instrumentalists and singers. And both are, as they describe themselves, “quite simply curious”. Which is something of an understatement. An unadulterated passion for experimentation is their driving force. Although in their late twenties, the couple have not forgotten their youthful enthusiasm, but combine it with mature reflection and are therefore better able to integrate additional elements into their art, which means the result always remains homogeneous.

Andrina Bollinger and Marena Whitcher got to know one another at jazz school, but it was actually the second time they had met. “We had already met as children in the (childrenʼs circus school) ʻCircolino Pipistrelloʼ”, says Bollinger. Whitcher laughs, adding: “But we only found out later that this was the case.” You cannot escape fate, so what was bound to happen inevitably did: “When Marena was asked to do a solo concert, she didnʼt have enough material to be able to fulfil the booking on her own. So she asked me. We then amalgamated our songs, which proved to be the start of everything”, recounts Bollinger.

Their first album from 2016 is called “A Symmetry”, and the play on words concealed in this title says it all, both women are in fact actually confident individuals when it comes to their manner and their art, who have been happy to tread their own path in a large number of collaborations and solo performances. “From the very start, we played two characters that are totally different. Eclecta thrives on this duality, this asymmetry, but at the same time we also have the opportunity to melt into one another”, explains Whitcher, to which Bollinger adds: “We can blend our voices, so that people can hardly distinguish one from the other. The album title describes this ongoing interplay between symmetry and asymmetry.”

The 15 songs, which, as previously mentioned, refuse to be pigeon-holed and deliberately map the stylistic spaces which contribute to the experiment, when added together become an opalescent kaleidoscope of euphoria and melancholy, of passion and thoughtfulness. And listeners still find “A Symmetry” astounding even three years after it first appeared, allowing more and more details to be unveiled: for the protagonists, today the record represents only a snapshot of their artistic process. “On our forthcoming album, which we hope to release at the beginning of 2020, we want to advance this play even further, so that the whole thing continues to become more intermeshed.”

“The Get Going! funding gives us something very precious, namely time. Apart from that, you are never paid for the immensely long period of time it takes to get to grips with specific topics, and to research and write songs.”

What this will sound like, reckon the duo with a wink, “currently remains a secret”. When they talk of their influences, they range from social issues to painting, from theatre to performance art, from literature to philosophy. Whitcher, who has American roots on her fatherʼs side, is enthusiastic about the surrealists and, during her performances, goes into such questions as “What are monsters nowadays and why do we need them?” or “Having first world problems and creating art – do they go together?”. It is also important to Bollinger to integrate political and social topicality into her creative work. Consequently, she writes about such issues as climate change, freedom of thought and digitisation, as well as searching for places where numbers and codes do not control us. She splits her time between Zurich, Berlin and her Engadine homeland, trying to capture the sounds of these different places, because, as she says, “it is crucial where you are when you are creatively active”.

One of these creative playgrounds is also the stage. With instruments and costumes she makes herself, she transforms a performance into a kind of complete artwork. Therefore, in future they want to make increased use of the medium of video in order to lend a visual aspect to their music. But this is only one of what seems like a thousand ideas with which these two musicians are busy. In the end, Eclecta should also be a statement that contradicts the zeitgeist: “In our individualised society, everyone is focused entirely on themselves, never once glancing at what is going on around them.” Whitcher believes “Yet community is a basic requirement of humans”, and Bollinger adds: “I already see it as one of our jobs to reflect the world in our art and to encourage a different way of thinking.”

In any event, they regard the Get Going! funding from FONDATION SUISA as something that offers them a great deal of freedom. “It gives us something very precious, namely time”, comments Bollinger. “Precisely”, emphasises Whitcher, “apart from that, you are never paid for the immensely long period of time it takes to get to grips with specific topics, and to research and write songs”. When you look at it this way, Eclecta is a fine example of this kind of encouragement, because both of these young ladies are venturing down paths that so far remain untrodden and now no longer risk falling between two stools with their passion for experimentation.