For the composition project “Swiss Beethoven reflections”, Aglaia Graf developed a concept with several movements. These are based on two, three motifs or themes which have been inspired by a work of Beethoven. Text by guest author Markus Ganz; video by Mike Korner 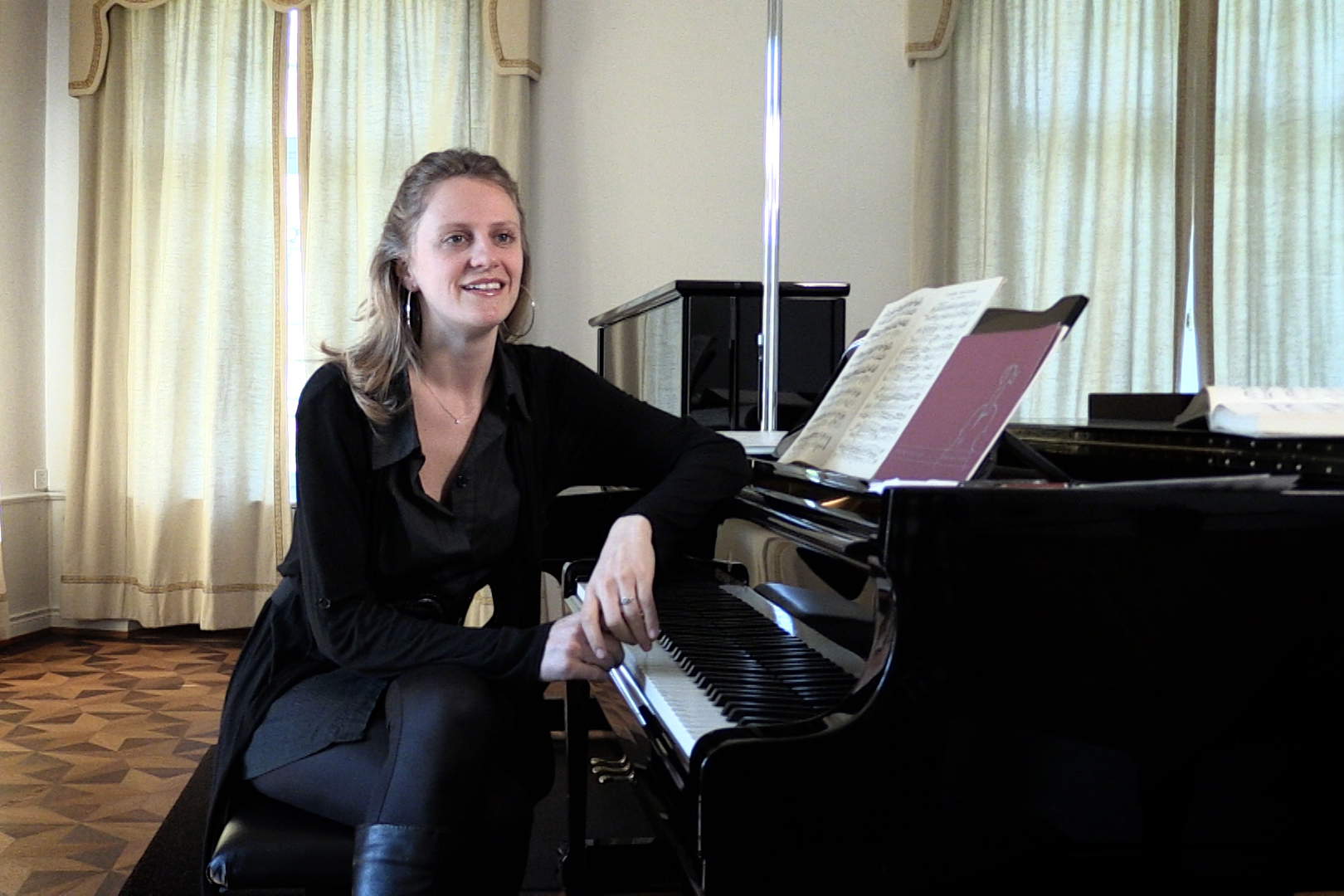 Aglaia Graf during the talk about her composition in March 2020. (Photo: Manu Leuenberger)

From the start, it was not an easy task for Aglaia Graf to find a suitable path to her own composition in the course of this project. First, the composer and pianist from Basel took a look at the notes of the Swiss folk song used by Beethoven and read its lyrics. Then she went for a walk with her dog and sang the song – expecting that it would trigger something in her and inspire her for her own composition. “However, nothing sprang to mind, I could not find a connecting point I could grasp.” Not even when she studied Beethoven’s variations. “I must say that I am not that thrilled by this work even if you can retrace quite well which elements he used to build up his variations.” It was probably some kind of a conceptual work by him and that is why it has not directly inspired me for my composition.

Then Aglaia Graf thought that she could pick up the general element of the folk song and set out to find other Swiss folk songs that appealed to her. “I found very beautiful ones and looked whether there was material which I could work with.” But yet again, she turned away from that approach. She came to the conclusion that she had to develop a concept in order to really get going. Thus, she decided to relate to Beethoven in general.

When asked what personal significance Ludwig van Beethoven had for her, Aglaia Graf posed a counter-question: “For which musician does Beethoven not have a special significance?” Especially in the life of a pianist he was very important from the very beginning and was a companion through life. “You grow with his music and you develop alongside it.” It was also an absolute reference point whenever you composed a piece. “By playing his works you already learn a lot in terms of composition, albeit indirectly. This also happened to me, both consciously and subconsciously, and he has certainly left many traces.”

Aglaia Graf has also had other special experiences when it comes to Beethoven. “When I sit with his pieces as a composer or a pianist, it is possible that I brood over a few notes for many hours. The perception of a specific section is an experience, the timeframe extremely long. The audience, however, who is listening to the piece, only experiences this moment in maybe two seconds.”

Therefore, it is not only the analytical derivation that is exciting. “Beethoven had, like hardly any other composer, a feel for how listening to his music could be experienced in terms of time.” As a composer it could happen quickly that one – because one spent so much time with so few notes – became too complex and packed too much into the piece. It would, in such cases, no longer be possible for the audience to savour this experience in the short time that they were listening to it. With Beethoven, however, this was the case, and that was something that had always fascinated her. “If you sit in a concert, you see, rather you hear, how a building gets constructed, stone by stone. This influenced me very much, as a musician, as a composer, as a human being.”

With the decision to base her composition on Beethoven in general, Aglaia Graf made quick progress. She developed the concept of several movements, which are based on two, three motifs or themes which have been inspired by a work of Beethoven. “This could also be appealing to the audience: as a small piece of homework or rather listening work to detect which piece of Beethoven such a passage has been inspired by.” With a brainstorming, she began to search for motifs or themes that she could integrate: “Which ones do I have in my memory, which ones are known to a wide audience, so that they have a recognition effect”. She selected a few and pondered thought it over which would be suitable for which movement so that they would result in a meaningful sequence.

First, Aglaia Graf wanted to only use these motifs and themes as connecting points. “But it actually ensued that, in the final movement, variations arose from it.” They related to the theme of the last movement of the “Gassenhauer Trio” (Piano Trio Op 11) – and that is how the circle of the six variations of Beethoven on a Swiss song closes. “My first movement also relates to the first movement of the ‘Gassenhauer Trio’ but does not, like the other movements, contain any variations.” Aglaia Graf stresses that she had not adopted the Beethoven motifs “1:1”, of course. In terms of the folksong-like theme in the last movement of the “Gassenhauer Trio”, she had not simply taken the melody as an element but “the rhythm and the character which I have changed slightly – in the original it is dance-like and popular, in my piece it is humoristic.”

The plan emerged at the beginning of 2020 to write four short trio movements for piano, cello and clarinet. “My last commissioned composition was for solo clarinet, so I already found myself in that sound world. I also play with the English cellist Benjamin Gregor-Smith in a duo. This is how the instrumentation came about; in addition, Beethoven also wrote fro this instrumentation, i.e. the famous ‘Gassenhauer Trio’.”

At the time of the conversation, mid-March 2020, she already had composed large parts of the first, second and fourth movement for this instrumentation – “even if that was partly only in the back of my mind”, she adds with a laugh. “The first movement is literally complete, including the full notation with all details, when it comes to the other two movements, I only have the notes themselves so far. The precision applicable to notation, which is already clearly present in my mind, requires almost more time than composing itself.” For the third movement she now leans towards designing it as a kind of interlude to the final movement, probably for cello solo. With regards to the composition parts which are not based on motifs, “I have picked up certain composition elements which are very important for Beethoven or in classical music in general, especially in the first movement.”