The FONDATION SUISA, a non-profit foundation, has been promoting the latest Swiss music creations since 1989. You can read about how this is done in detail in the newly launched “Director’s Blog”. Foundation Director Urs Schnell wishes to increase the “visibility of our activities” by doing so. Guest contribution by Rudolf Amstutz 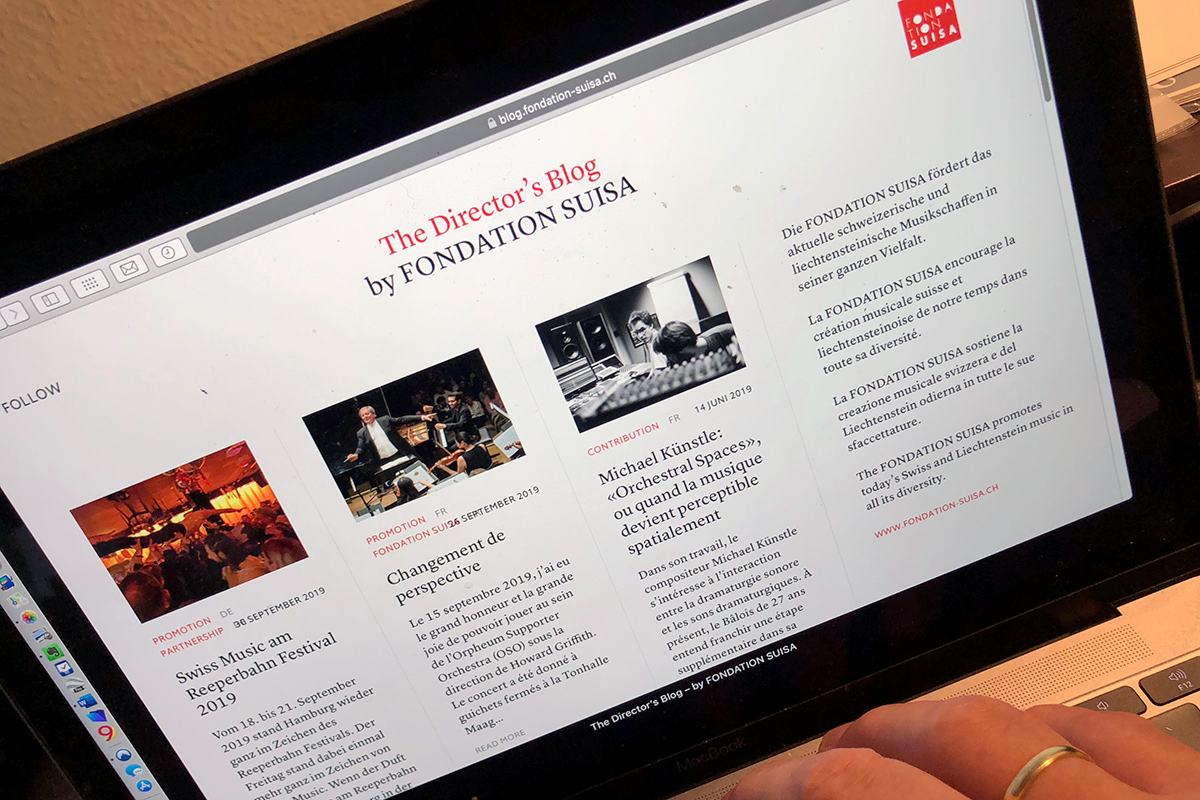 What exactly does a foundation such as the FONDATION SUISA do? A general summary of its activities may well be included on its website, but what does its work actually look like on an everyday basis? What happens to roughly CHF 2.7m which is allocated to the foundation by the Cooperative Society SUISA each year – an amount which corresponds with 2.5% of the SUISA income from performing and broadcasting rights in Switzerland and the Principality of Liechtenstein? And how does the support and promotion affect various levels in the end?

“This question has been put to us repeatedly over the last few years”, Urs Schnell says. “In a world which may well be dominated by social media but presents itself with an increasing breakdown in terms of solidarity, we realised that the diversity of our activities is hardly perceived in its whole spectrum. How then”, adds Schnell, “can a foundation communicate in an open and transparent manner with a society whose perception has drastically changed, not least because of digitisation?”

A blog with insights into the foundation activities

“The Director’s Blog”, is now increasing the internet presence and at the same time personalising the activities of the foundation through the Director whose role as a blogger acts as a mouthpiece for the organisation. “We turn the inside out”, Schnell explains the decision, “and we do this in times of individualisation in a more personal manner than we have done this so far.”

It is the blog’s objective to convey the latest activities more quickly and in a more current way without adapting to the hectic superficial character of social media. The background thus turns into the foreground: “We visualise the in-depth work and the thoughts and strategies which are behind it in order to make our work more comprehensible to the public.”

The Director as internal chronicler

This happens with regular contributions on current events about the presence of the foundation at international and national level but also as food for thought for topics relevant to the foundation, or with portraits of recipients of work contributions that have a magazine character. “For the latter, I shall permit myself to publish a guest contribution from time to time”, says Schnell. And adds: “The authenticity is an elementary part of the blog, that is why it would not be very credible if I left my role as an internal chronicler.”

In any case, the Director is looking forward to coming feedback relating to the new vessel. And should “The Director’s Blog” become a cause for passionate discussions “that would be even better” according to Schnell.