The Transport and Telecommunications Committee of the National Council has moved to close down six SRG special interest stations and has filed a motion in this sense. For Swiss music creators the consequences would be devastating. These stations are precisely those that play and promote local Swiss music. Sign the online petition “Hands off special interest stations” now! Text by Giorgio Tebaldi and Manu Leuenberger 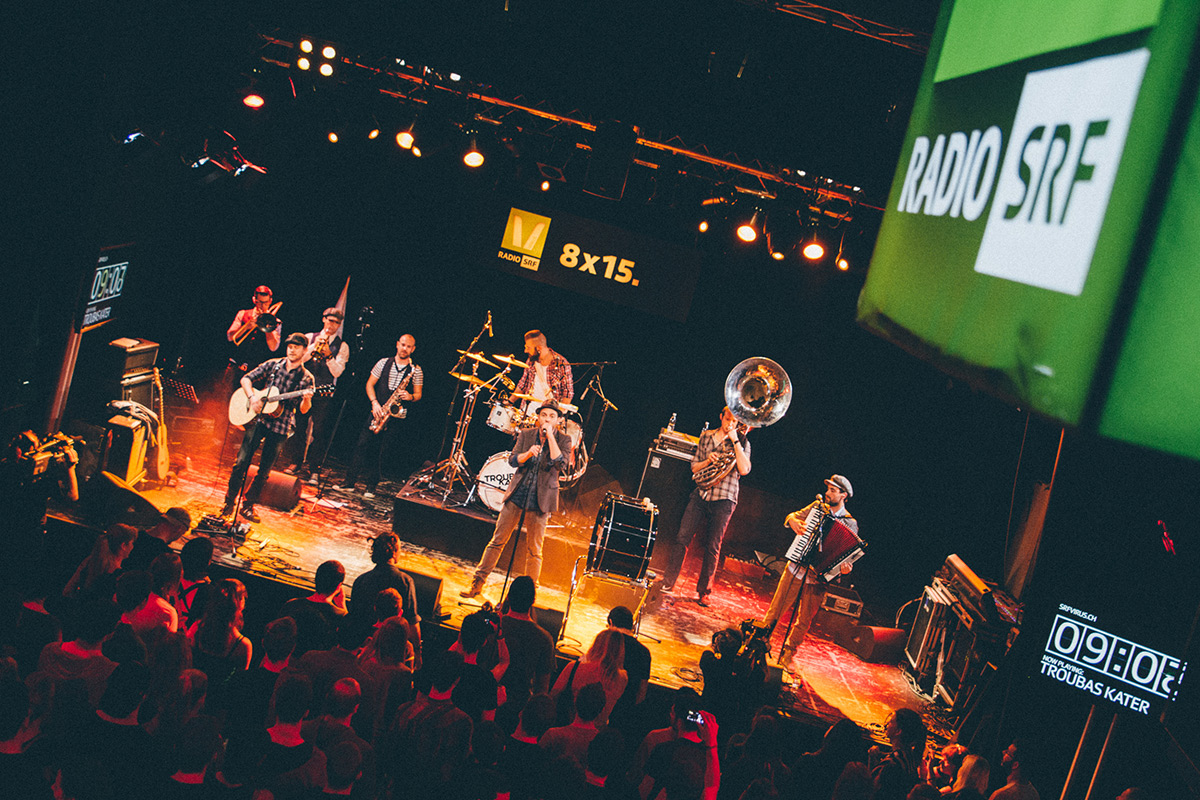 From the streets of Berne to the stage of the Kulturfabrik in Lyss: The band Troubas Kater performing in dialect appears during the 14th edition of “8×15.” in November 2015. At each of these concert evenings of SRF Virus, 8 Swiss bands can present their talent, and be discovered by the audience in a 15-minute slot. (Photo: SRF)

At the Swiss Music Awards in February 2017, the Zurich duo Dabu Fantastic and their co-composer Gianluca Giger were awarded prizes for the best hit and best composition. The Zurich band is currently one of Switzerland’s most successful pop acts. According to singer Dabu Bucher in a recent interview with SRG (Swiss Broadcasting Company), the band owes its popularity in great part to the SRG radio stations. SRF Virus first played its songs over 10 years’ ago, actively encouraging the band’s career.

The SRG youth station is important for other Swiss artists too. It serves as a springboard for young and (still) unknown musicians. The station provides an important platform for newcomers, through its “8×15.” concert broadcasts for example. 50% of the music broadcast by SRF Virus is Swiss music. Hardly any other station offers its audience so large a proportion of local music.

But if the Transport and Telecommunications Committee of the National Council has its way, that will soon be over. In Motion 17.3010 for a “Reduction in special interest radio stations”, the Committee asks for six SRG radio broadcasting stations to be closed: SRF Virus, SRF Musikwelle, Radio Swiss Classic, Radio Swiss Jazz, Radio Swiss Pop and the French-speaking station Option Musique. According to the motion, these stations “do not perform any true public service mission”.

In its “Report on the revision of the definition and provision of the SRG public service taking into account private digital media”, the Federal Council reviewed the meaning of public service in radio and television broadcasting. In its report, the Federal Council pointed out that the SRG provides “numerous unprofitable services in the interest of society”. These services include promoting Swiss films, Swiss music and Swiss literature. This would hardly be possible without reception fee revenues.

Special interest stations extensively promote Swiss music – pop and rock as well as jazz on SRF Virus, and classical and especially folk music on SRF Musikwelle. As SUISA claims on its website, altogether 22% of the music played on the six special interest stations is Swiss, as against 20% overall for all the SRG stations. By comparison, Swiss private broadcasters play less than 10% of Swiss music on average.

Special interest stations are instrumental in discovering and promoting Swiss music. Their reporting about the current Swiss music scene is irreplaceable. It is difficult to imagine private broadcasters throwing themselves into the breach left by closing the special interest stations. Private broadcasters are guided by profit-making principles and are primarily financed by advertising. Therefore, they have to gear most of their programming to an audience which wants to hear hits. Swiss musicians hear this all the time in statements like:  “we don’t make the hits, we just play them”, says singer-songwriter Christoph Trummer, President of the association Musikschaffende Schweiz (Swiss Musicians), in an interview with Musikmarkt, the music magazine.

Closing down the special interest stations would also affect Swiss music creators financially. Between them, the six stations played about 550,000 minutes of music by Swiss authors in 2015. According to SUISA’s 2015 annual report, the licence fees for SRG radio stations average CHF 2.70 per minute of playing time. Thus, broadcasting royalties for the works of Swiss composers, lyricists and publishers on the six SRG special interest stations totalled about CHF 1.5 million. This money does not only go to well-established stars, it also goes to unknown Swiss artists.

The motion of the Transport and Telecommunications Committee if accepted would have serious implications for the Swiss music scene. Not only would Switzerland lose these important platforms for showcasing the broad diversity of Swiss musical creation, closing down the special interest stations would have significant financial consequences for artists.