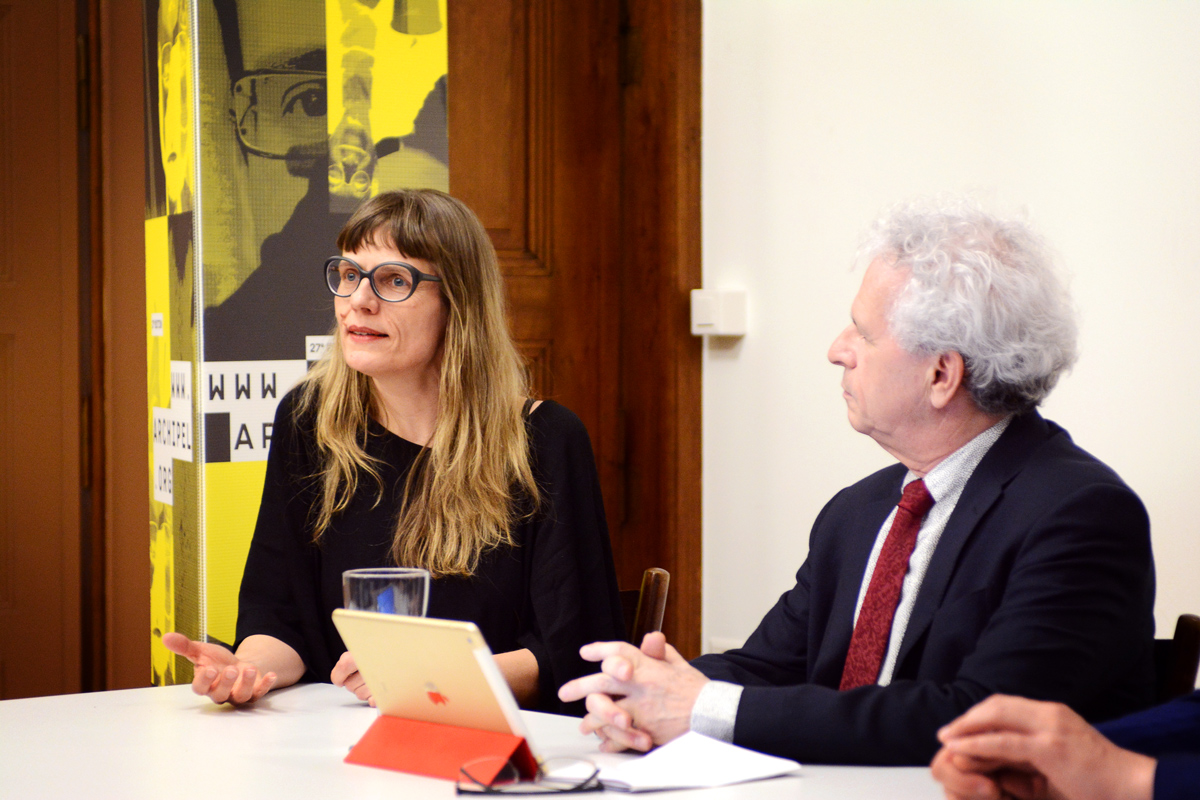 Katharina Rosenberger, a Swiss composer who was born in Zurich and works in the US, and festival director Marc Texier at the introductory discussion for the “Swiss Concert Evening“ at the Festival Archipel on 21 March 2018 in Geneva. (Photo: Manu Leuenberger)

With the support of SUISA, the Cooperative Society of Music Authors and Publishers, Archipel proposed an evening in two parts. In cooperation with SUISA, Marc Texier, General Manager of the Festival, invited Swiss composers Katharina Rosenberger and Michael Pelzel for a pre-concert interview. This was a good opportunity to hear about their activities, influences, composition methods and projects.

The least one can say is that their influences are at opposite ends of the spectrum: Katharina Rosenberger draws her musical references from the Renaissance, namely Willaert and De Rore in particular, while Michael Pelzel willingly avows that, in his piece he used Indian and African techniques to create a contrast between western and non-European music, and between tradition and innovation. The range of their activities does not, however, stop at composition; one teaches in the United States, the other plays the organ.

This means that neither of them have to rely solely on composing for their livelihood; they agree that the surge in streaming, is eliminating – or strongly eroding – CDs and live shows, which are an important source of income for them. Fortunately for the composers, SUISA is committed to safeguarding their copyrights, and makes sure they are remunerated when their compositions are performed.

After the interview, the concert was ready to start. Four pieces are on the programme: two Swiss creations, namely “Tempi agitati“ by Katharina Rosenberger and “Ante Litteram“ by Oscar Bianchi, and two international creations, namely “Etüdienbuch zu Diabelli“ by Michael Pelzel and “Präludien Buch 1-4“ by Mischa Käser.

The Neue Vocalsolisten Stuttgart, a German vocal ensemble, performed a customised repertoire composed especially for them. They had already performed the piece by Oscar Bianchi in 2012 and that by Katharina Rosenberger in 2016.

In “Tempi agitati“ – performed in an abridged version that evening – Katharina Rosenberger creates contrasted settings thanks to alternating aesthetics and a staging based on the acoustics and architecture of the concert hall. The performance starts in the dark. The soloists are sitting among the audience. Suddenly, one of them starts a dialogue of onomatopoeia. With precision, the vocalists answer, wait for and interrupt one another. They then come together on stage and strike up a polyphonic song in Renaissance style, with a nod to Adrian Willaert and Cipriano de Rore.

In revisiting the music of the Renaissance, the composer is seeking the natural sound of the voice. The voices of the soloists are pure, linear and without artifice – but not without emotion. The beginning of “Tempi agitati“ is characteristic of the piece; the singers move about the room, alternate and juxtapose the aesthetics, tempi and characters, and finish like they started: in the dark, offstage and non visible to the audience.

Each musical effect has a meaning

In “Ante Litteram“, Oscar Bianchi is inspired by David Foster Wallace’s “Infinite Jest“ and Nietzsche’s “Antechrist“ where he finds “the same empathy and lucidity in the exploration of the reasons preventing man from achieving deeper self-knowledge and self-awareness”. The piece has three underlying themes: evil, morality and salvation, and each musical effect has a meaning.

After a beginning spoken in homorhythm, the voices stagger out slowly, adopting different rhythms and renditions, like clear and coherent thought which becomes lost in the meanders of the mind. The dissonance between the sopranos, for example, evokes pain, the imitated laughter tends towards absurdity, while the variations in pace run parallel to the variation of our own internal agitation.

Diabelli, in the work of Michael Pelzel, refers neither to the composer Anton Diabelli, nor to Beethoven’s “Diabelli variations“. “Etüdenbuch zu Diabelli“ for six voices a cappella is based on a story by Hermann Burger in which a magician decides to put an end to his life as an artist. The studies, which can be sung in random order, play on the rhythms provoked by the synchronisation and desynchronisation of the voices. Moreover, the tempi are sometimes superimposed, with the female and male voices beating to different pulsations so that the voices enter into opposition.

To end the evening, Mischer Käser’s “Präludien Buch 1-4“ was rich in musical elements: superposed effects – spoken voice, operatic cell, rhythmic cell – rendering the voices independent from each other, dramatisation, with sighing, breathing and perfectly synchronised surprise effects. The composer wanted “exotic song techniques to cohabit with familiar sounds and make them alien”. Surprise and originality are the characteristic features of the work, as well as the dichotomy between the western form of the prelude and the “exotic techniques” used.

Neue Vocalsolisten Stuttgart lived up to our expectations; the apparent ease with which they performed the virtuoso repertoire was disconcerting. There is no question about their versatility in mastering the works, effects and even the aesthetics. The performance highlighted the perfect understanding and osmosis between the members of the group which enables them to grasp every aspect of these virtuoso works and transcend them in their interpretation.