Last year, SUISA and the other Swiss collective management organisations (CMOs) have invested time and money into a cost analysis which had been requested by the federal government. The results of the study are now available. At hardly anyone’s surprise, study reveals that the Swiss CMOs work efficiently and have their costs under control. Nevertheless, the Federal Council demands a stronger control of the collective management organisations in its proposal for the copyright law revision. This is not just unnecessary, but actually absurd, as a closer look at the study results reveals. Text by Andreas Wegelin, CEO 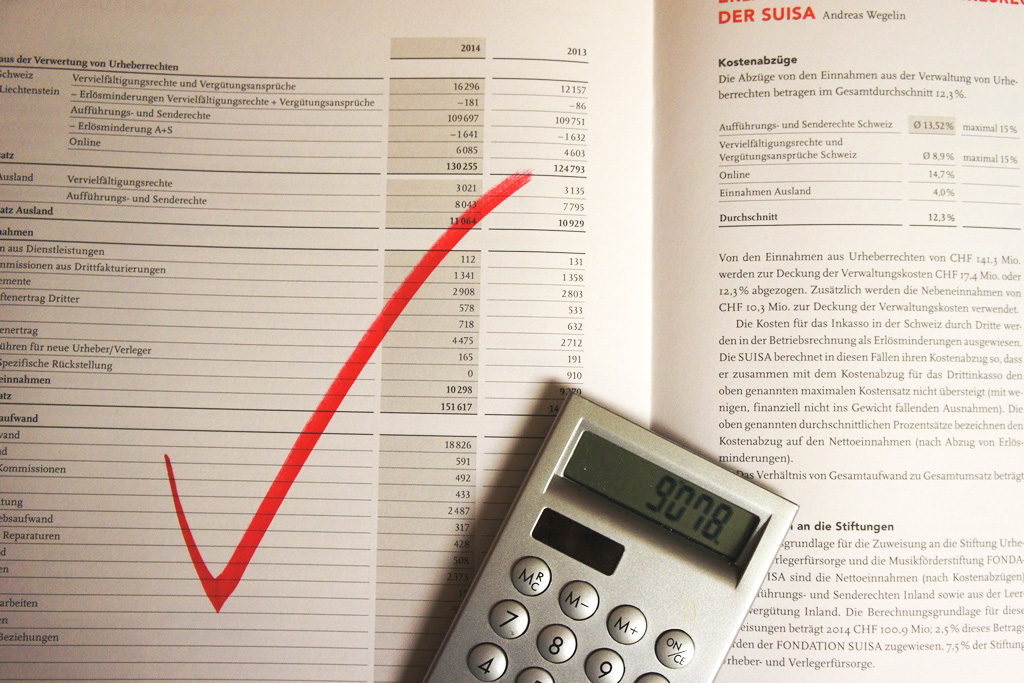 A study of the IPI confirmed that SUISA and the other Swiss collective management organisations have their costs under control (Photo: Giorgio Tebaldi)

What is the study about?
The supervisory authority of the Swiss CMOs, the Swiss Federal Institute of Intellectual Property (IPI), has, upon the recommendation of the Swiss Federal Audit Office (SFAO) commissioned an in-depth study in early 2015 with the objective to investigate whether the costs of the CMOs are adequate. The study was conducted between February and December 2015 by experts of the Fernfachhochschule Schweiz (distance learning technical college, FFHS), the consultancy firm SERVUS GmbH and the Zürcher Hochschule für Angewandte Wissenschaften (University of Applied Sciences in Zurich, ZHAW).

The basis for the study were publicly available data from annual / financial reports of the organisations, on the one hand. On the other hand, detailed finance and organisational data were evaluated that had been provided by the CMOs or obtained via surveys among the organisations. The analysis covered material from the years 2008, 2012 and 2014. The costs for this exhaustive study was carried by the CMOs.

What were the conclusions of the study with regards to the administration costs?
The in-depth analysis confirms that the administration costs of the CMOs are generally adequate and are within the range of comparable sectors. There is a similar picture with regards to salaries: They are in a similar range or even lower than those of the public administration and insurance sector. The study concludes: “Based on the analysis undertaken there is no cause for concern that there are significant shortcomings related to the cost management of the collective management organisations.”

The study also reveals the sometimes rather major differences between the CMOs in terms of the relevant administration cost and salaries, and explains those further. The reasons for this are, for example, due to the fact that the business activity and the legal mandate varies from CMO to CMO. Furthermore, the CMOs differ in terms of work repertoire processed, licences granted and tariff bases.

Last, but not least, the study offers valuable information regarding room for improvement to the CMOs. There is, for example, room for savings in cases where newly negotiated tariffs are structured in a simpler manner and processes can thus be automated. In order to achieve this, the help of negotiating partners is required, as the tariffs are agreed upon after negotiations with the relevant user associations. The study also recommends to evaluate potential synergies for an even closer cooperation. The CMOs intend to consider these recommendations and derive suitable actions from them.

SUISA looks good in terms of its administration cost and salaries. Does this mean there’s no need for any further action?
There is always room for improvement – this applies to every enterprise. SUISA also constantly aims to keep its costs low, to improve its efficiency and thus to be able to pay out as much as possible to its members – composers, lyricists and publishers of musical works. As a consequence, cost control and raising efficiency are central points in SUISA’s strategy. SUISA constantly evaluates and streamlines its business processes. IT forms one important aspect: By means of online registration and information platforms, processes can be simplified and costs can accordingly be saved. Last year, the introduction of an online portal for SUISA members constituted an important step in that direction; the portal continues to be expanded in terms of its functionalities. Similar projects have been launched in the customer area.

There is also potential for savings with regards to tariffs. On the one hand, SUISA seeks to standardise its tariffs as much as possible. SUISA can, however, only implement this step to a limited extent due to the fact that the tariffs are not devised unilaterally by SUISA but are subject to negotiation with the user associations. In the case of tariffs where such a simplification is feasible, SUISA is seeking to implement this as much as possible.

The study confirms that the five CMOs ProLitteris, SSA, SUISA, Suissimage and Swissperform work well from a general perspective. Is the stricter control on the CMOs as requested by the Federal Council therefore appropriate at all?
No, there are three reasons why the requested stricter control is unnecessary and incomprehensible. First of all, the administration cost analysis shows that the CMOs look good in terms of their cost and salaries. A stricter regulation would be appropriate if the organisations in question would run their businesses badly and to the disadvantage of their members and customers.

Secondly, the Swiss CMOs are cooperative societies under private law, resp. in the case of Swissperform, an association under private law. They belong to their members. It is the members who decide and vote at general / delegates’ assemblies – the respective highest organisational bodies – how the societies carry out their work correctly and adequately. As the cost analysis has shown, members are well placed at exercising their autonomy. The plans of the Federal Council represent a case of members, i.e. Swiss creatives, being patronised and a gross disregard of their autonomy.

The working group on copyright (AGUR12) – and this is the third reason – has already concluded that a stricter supervision over the CMOs is not necessary. In said working group, consumer, producer and user associations took part alongside representatives of creators and artists. The proposals of the Federal Council on the copyright revision are largely based on the final report of this working group. The Federal Council has, nevertheless, ignored the recommendations of the AGUR12 concerning the issue of supervision and decided that a stricter control is required. Particularly with a view on the results of the study, this decision is not just very hard to comprehend but quite simply wrong.

So what are the next steps for the copyright law revision?
The CMOs and other parties have time until the end of March to take a stand in relation to the proposals of the Federal Council. This does not just affect the plans for a stricter control but also other suggestions e.g. how to combat internet piracy or with regards to remuneration models for private copying. We are going to give our view within said deadline and inform you about this in due course.

What’s really important for SUISA and the other CMOs is that after the presentation of this study, a sense of calm returns to the discussion on the control and supervision of CMOs. AGUR12 had already explained in its recommendations that a control of the CMOs which exceeded today’s statutory regulations, was not necessary. The discussion for the impending copyright law revision now needs to be de-emotionalised in our opinion. The focus for the next months must be re-directed to solutions which guarantee a fair remuneration for authors when it comes to the usage of their works, especially in the digital distribution sector.