SUISA’s General Assembly takes place in the Kongresszentrum Biel (concert hall) on 21 June 2019. For the first time, two financial statements will be presented to the General Assembly; a novelty in SUISA’s history. Furthermore, there are elections on the agenda: The entire Board needs to be newly elected, as does the Distribution and Works Committee; there are also by-elections for the Complaints Committee. Text by Dora Zeller 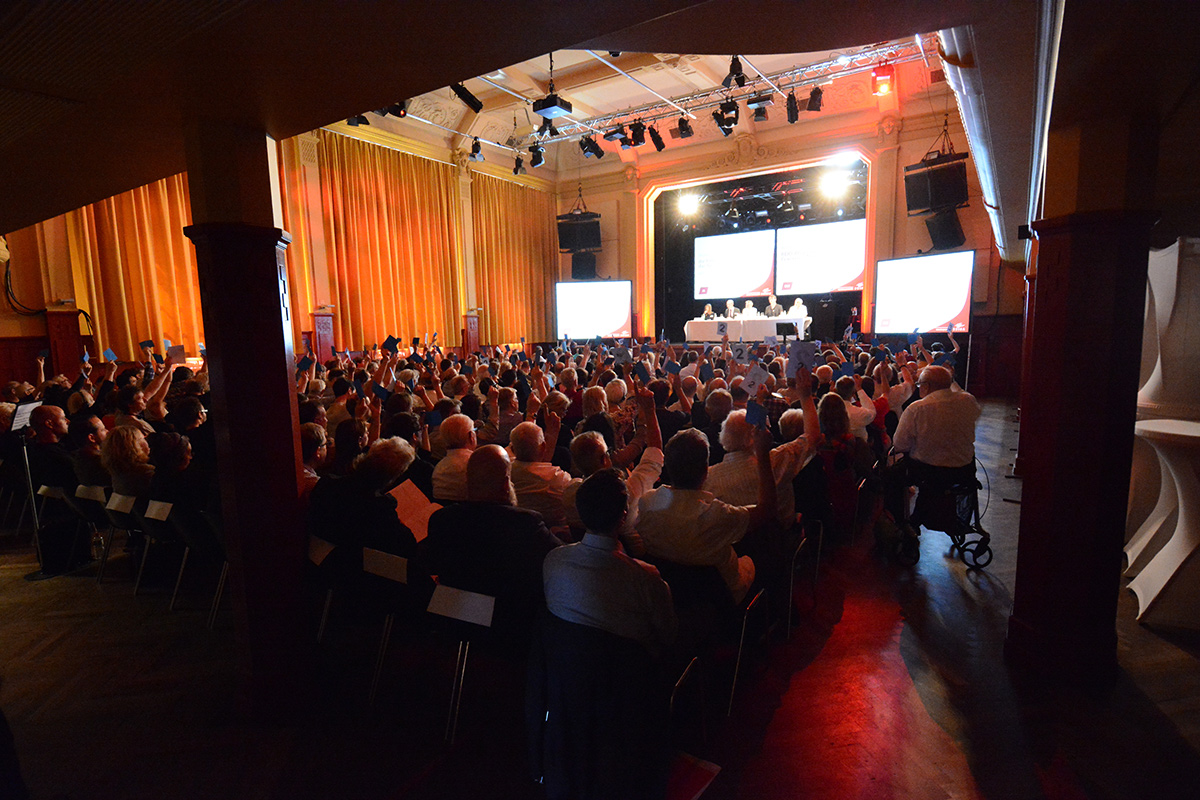 Last year, voting members and guests gathered in Berne (see picture). The next General Assembly of SUISA takes place on Friday, 21 June 2019 in the concert hall of the Congress Centre in Biel. (Photo: Manu Leuenberger)

At the SUISA General Assembly 2019, the agenda item annual report includes, apart from the usual financial statements of the Cooperative Society for the year 2018, the consolidated financial statements for the SUISA group and will be presented to voting members for approval for the first time. The consolidated financial statements contain the annual accounts of the organisations which are directly or indirectly controlled by SUISA. They include SUISA Digital Licensing AG, based in Vaduz (FL) as well as the Joint Venture Mint Digital Services AG, where SUISA has 50% in holdings. Both sets of statements were examined by auditing firm BDO and recommended for approval.

Election of the Board

Of the 15 current members of the SUISA Board, 13 are standing for re-election for another term of office. Two previous members are going to leave the Board due to the limitation of the term of office: Marco Zanotta (Vice President) and Bertrand Liechti (President of the Board Committee for Finance and Controlling) have been contributing to SUISA’s developments for 20 years. Prior to their official farewell, they are going to look back on their time in the office and share their memories and some highlights with the audience.

The two nominees for the Board that have been proposed are intended to lower the average age of the Board: Grégoire Liechti, born in 1981, from Geneva, is intended to replace Bertrand Liechti; Sylvie Reinhard, entrepreneur, born in 1980, shall supersede Marco Zanotta. While Grégoire Liechti brings long-term national and international experience in the publishing business to the table, Sylvie Reinhard complements the Board’s skills and knowledge in the digital innovation and culture sector.

The Distribution and Works Committee is made up of a maximum of 22 members; 21 are standing for re-election. Grégoire Liechti, member since 2015, stood down from the Committee and is running for a Board position. Regarding the by-elections the nominations committee is going to provide information on the seat that is going to become vacant via the usual publication channels for the GA 2020 and ask the relevant associations of music authors and publishers for a pre-selection.

At the GA 2018, the seat reserved for the second expert remained vacant in the newly created Complaints Committee. The Board is now tabling the motion in the General Assembly to elect Marco Zanotta as an external member into the Complaints Committee. He is neither an associate nor a member of SUISA.

The Articles of Association which had been revised at the last General Assembly and have been in force since 01 January 2019 provide the General Assembly with new powers. It is responsible for the compensation and other benefits to the President and the Board members and also for the overall investment policy. To this end, the Board is going to present the compensation regulations in force since 2009 and has worked out the general provisions regarding the investment policy and asks for its approval.

Finally, the SUISA GA provides an opportunity once more for members to exchange experience with other members and with guests from politics, culture, associations etc. and to hold conversations with SUISA staff. Use these opportunities for participating in decision-making and exchange and we look forward to a high turnout on Friday, 21 June 2019, in Biel.