SUISA’s ordinary General Assembly takes place on 22 June 2018 in the Bierhübeli in Bern. It will be opened with a music performance by the ad hoc formation Swiss Ländlermix in line with the theme; “Folk music – Switzerland crossways”. Important business items on the agenda are the review of the Articles of Association, the new Complaints Committee and an election of a substitute for the Distribution and Works Committee. Danièle Wüthrich-Meyer, President of Swissperform will attend as guest speaker. Text by Dora Zeller 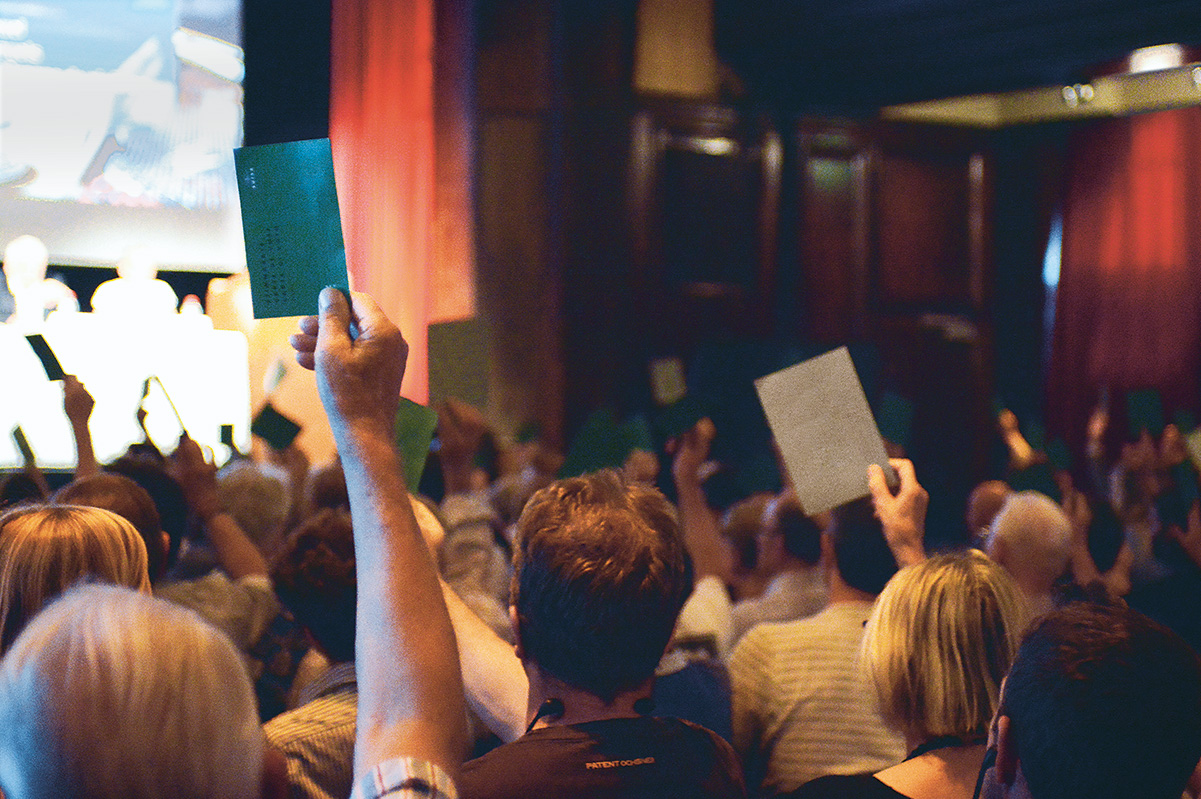 Up to 19 June, members who are eligible to vote can register for SUISA’s General Assembly, which is to be held on 22 June 2018 in the Bierhübeli in Bern. (Photo: Manu Leuenberger)

SUISA’s General Assembly 2018 is determined by the review of the Articles of Association. The music business is changing: increased competition levels, new technologies, international networks, tougher regulations. SUISA wants and has to keep up with the developments and create a base for the successful advancement of the cooperative society.

Changes to the Articles of Association are therefore going to be proposed to the General Assembly. By way of the proposed amendments, SUISA’s Articles of Association will be brought in line with the Act on Collective Management Organisations (CMO Act) of Liechtenstein which has been ratified in March 2018, and thus with the European Directive on the Collective Management of Copyright.

The EU Directive which has in the meantime been implemented into national law in Liechtenstein, contains provisions which entail a strengthening of members’ rights. Apart from rules on transparency and for supervision of the collective management organisations, a significant point covers the making available of a complaint procedure for members. SUISA intends to create a Complaints Committee with well-versed persons from the music sector and legally adept experts. It will suggest committee members for election.

Apart from the above, it is necessary to adapt the Articles of Association to the EU Directive in order to continue to be able to licence online exploitations at cross-border level in the European Union. SUISA has been licensing music of SUISA members at pan-European level since 2013 in the online sector, partially even far beyond Europe’s borders.

Pursuant to the EU Directive, collective management organisations must meet certain standards in order to be able to carry out cross-border licensing. By way of revising the Articles of Association, the conditions will be met that SUISA can directly negotiate with and collect from online providers such as iTunes or Spotify regarding exploitations outside Switzerland and Liechtenstein, too. The online business is a focus of SUISA’s strategy for the immediate future. For this purpose, Mint Digital Services were founded together with SESAC (USA).

It features on the agenda each year: statutory business. The annual report, management report, financial statements, profit and loss accounts, cash flow statements, the annex to the annual accounts as well as the auditors’ report will be submitted to the General Assembly for approval. After that, the Board’s and the auditors’ activities are ratified, and an election determining the auditors for the current financial year takes place.

As usual, there will be an interim report on the current financial year. Management will report on the financial development in the first semester. Furthermore, those in charge of FONDATION SUISA will provide an overview of the activities of the foundation in 2017 at this year’s General Assembly.

Natalie Riede will be proposed to the General Assembly for election into the Distribution and Works Committee as a substitute for Guido Röösli who is stepping down. She represents the Electronica sector, runs her own publishing company and has strong roots in the club scene.

There are multiple opportunities at the General Assembly to enter into conversation with many invited guests, e.g. representatives of music user associations, institutions or copyright experts. SUISA was able to secure a guest presentation by Danièle Wüthrich-Meyer. She is the President of Swissperform, the collective management organisation for neighbouring rights in Switzerland and the Principality of Liechtenstein.

How to get there / Catering

We recommend that participants take public transport to get to the Bierhübeli. The bus from Bern train station stops directly outside the event location. There are no parking spaces available. The Park & Ride car park Neufeld is within 10 minutes walking distance from the Bierhübeli. Coffee and Gipfeli will be offered prior to the General Assembly. After the assembly, a buffet lunch will be available.