Subsidised radio and TV broadcasters in Switzerland and Liechtenstein tend to create more broadcasting space for the music of SUISA members than privately financed channels. Moreover, the majority of the broadcasters supported by the Swiss Federation play more diverse music titles than their counterparts which are focussed on advertising revenue. In the interest of our local music creation and the cultural diversity, we therefore have to reject an abolition of the solidarity-based fees for public service media. Text by Andreas Wegelin and Manu Leuenberger 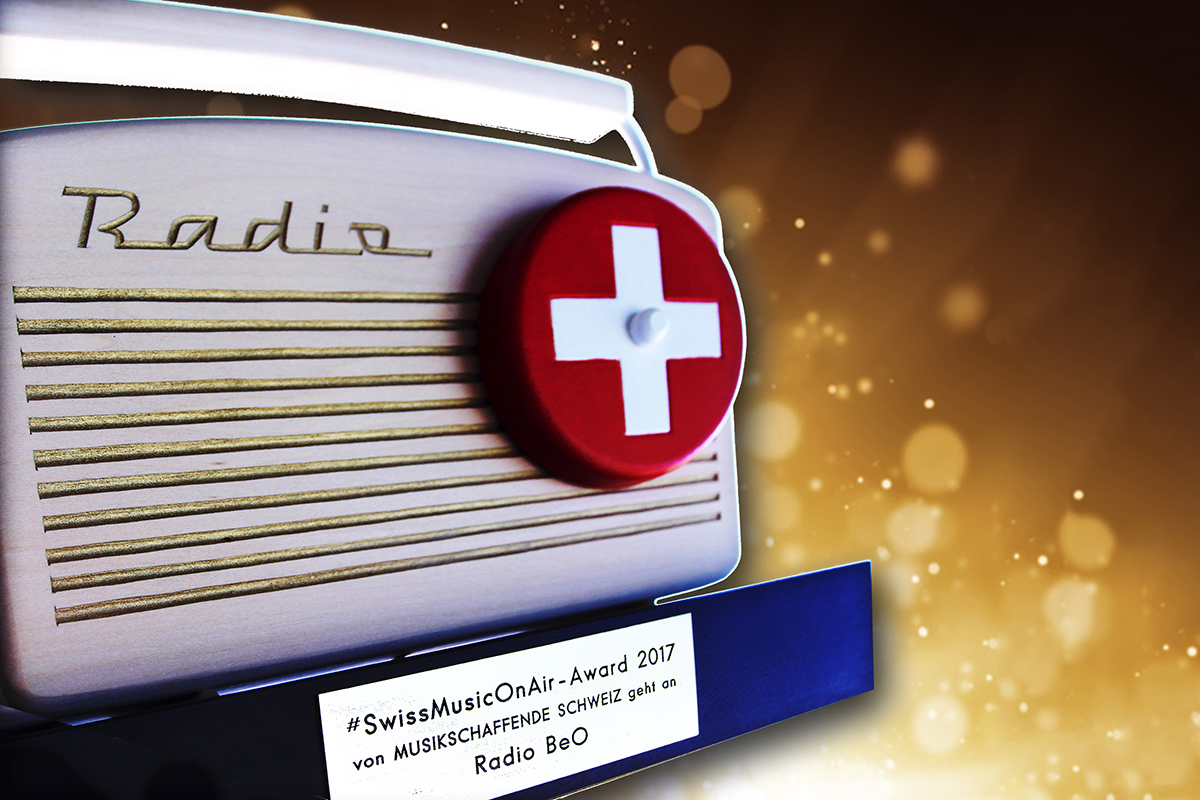 The Association ‘Musikschaffende Schweiz’ (Swiss Music Creatives) presented a “SwissMusicOnAir Award” for the first time in 2017. The prize was awarded to the licensed private radio broadcaster with the highest percentage of Swiss (pop) music in its programme: the subsidised Berne-based local radio Radio BeO. (Photo: Radio BeO)

On average, subsidised Swiss radio channels broadcast a higher percentage of music by SUISA members than private radio channels without any public sector funding. In the case of broadcasters which are subsidised by the Swiss Federation, the number of different music titles in the programme is also usually much higher than in the case of their mainly ad-funded counterparts.

A (co-)funding by the Swiss Federation thus contributes to Swiss music creation and diversity taking place in the broadcast programmes. This conclusion isn’t just plucked out of thin air, as the data included in music use reports reflect, which are available to the two collective management organisations SUISA and Swissperform.

If a company in Switzerland wishes to broadcast radio and/or TV programmes or feed them into cable networks, it requires a licensing agreement with SUISA. Under this agreement, the broadcasters are required to provide exact details relating to the programme they transmit.

Apart from that, the entirety of the broadcast reports reveals an overview of the entire music programme of a channel. In particular, SUISA is in a position to carry out the analysis of the played music of its own members on a well-founded basis. As soon as at least one of the authors is a SUISA member, the musical piece is considered to be a SUISA work for analytical purposes. A music title whose composers and lyricists are exclusively non-SUISA members are therefore considered to be part of ‘other’ repertoire, irrespective of the artist(s) in the course of establishing the music percentages. 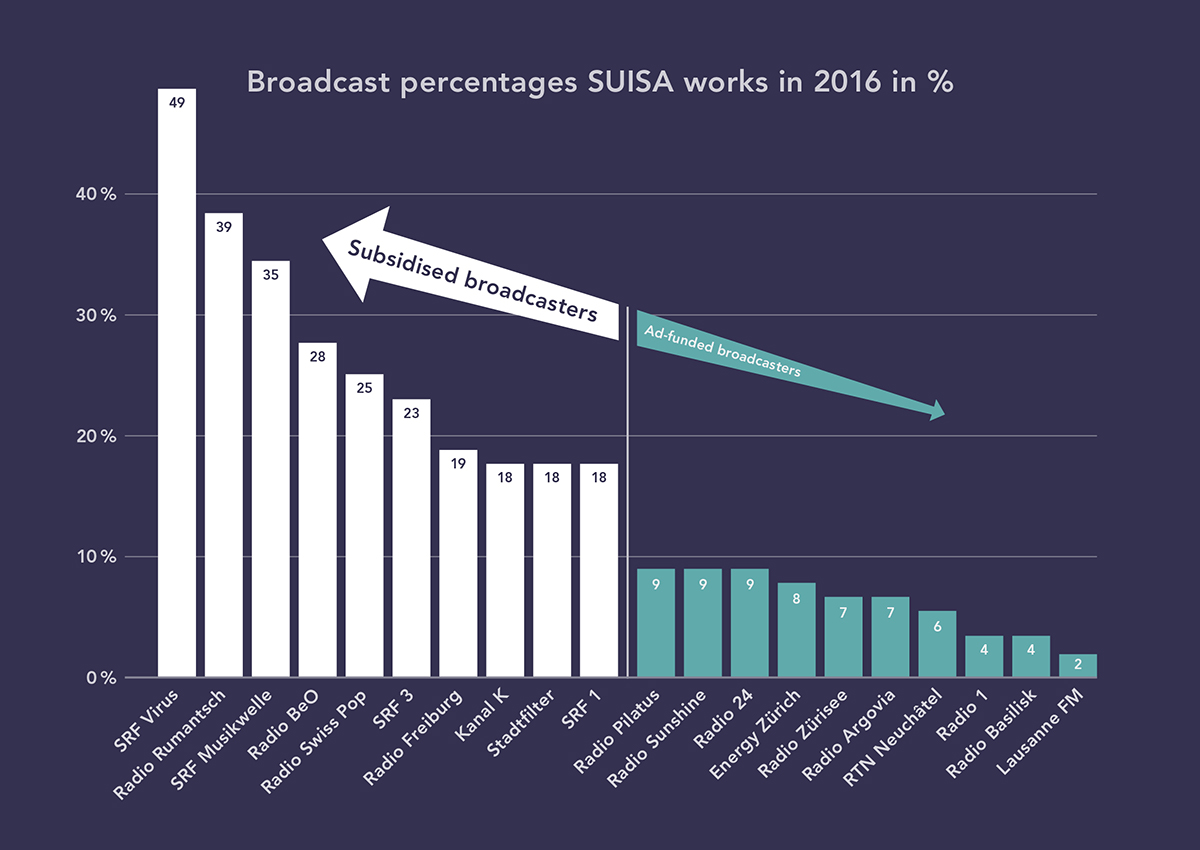 A glance on the calculated broadcast percentages from the year 2016 reveals a clear trend: Subsidised radios create more space for the music of SUISA members than privately funded stations. Please note: Not only the SRG programmes play an increasing portion of SUISA repertoire, but also the local channels such as Radio BeO, Kanal K or Radio Stadtfilter. The latter also receive a share of the radio/TV reception fees. The programme mandate therefore shows its effect in this context.

Programme mandates for the national (SRG) and regional (local broadcasters) public service differ in their respective detail. Both of them are, however, subject to basic provision of Art. 93 of the Federal Constitution of the Swiss Confederation: “Radio and television shall contribute to education and cultural development, to the free shaping of opinion and to entertainment. They shall take account of the particularities of the country and the needs of the Cantons. They shall present events accurately and allow a diversity of opinions to be expressed appropriately.”

Diversity in the music programmes of the Swiss radio channels

The cultural mandate of SRG includes cultural reporting, education in the cultural sector as well as cultural promotion. In the course of this service mandate, SRG has agreed guidelines for the promotion of Swiss music creation in the radio programmes in the Swiss Music Charter together with the associations and institutions of the Swiss music sector. An analysis of radio broadcasts dating back to 2015, based on an evaluation by Swissperform, shows the positive impact of the public service mandate on the programme diversity:

Based on this analysis, nearly every fourth played music title on SRG channels included Swiss music creators (percentage of CH music: 23%). The average percentage of broadcast Swiss music within ad-funded private channels amounted to a mere 12%.

A comparison of the number of various music titles proves another significant difference within the evaluated programmes: The audience of the SRG channels was able to listen to an average of 14,044 different recordings throughout the year. In the programmes of the private radio channels, the average across 12 months amounted to 3,143 recordings, a significantly lower number of different music titles. To put it bluntly: Private channels had a rotation of 9 different songs per day.

In the interest of Swiss music NO to No Billag

The public initiative, marketed under the deceptive title “No Billag” aims at a complete abolition of radio and TV reception fees. The initiators of this campaign have not set their targets on the collection body Billag. Instead, they intend to establish in the Federal Constitution of the Swiss Confederation that the Swiss Federation shall not subsidise any radio and TV stations. At the same time, if the initiative were to be successful, the previously mentioned basic provision according to which radio and TV must contribute to a cultural development and to take the national particularities of a country into account, would be deleted from the Federal Constitution of the Swiss Confederation without replacement.

In a purely commercially oriented radio and TV landscape, the broadcasters would inevitably focus on their advertising revenues. The current facts on broadcast percentages of Swiss Music and the number of different music titles convey an impression which impact such a finance-driven orientation would have on the programme contents. In the interest of our local music creation and the cultural diversity, we therefore have to categorically reject an abolition of the solidarity-based fees for public service media.

Further information:
Complete evaluations of the broadcast percentages of SUISA works, both in the radio transmissions of SRG as well as in the broadcasts of private radios in 2016 are published here: www.suisa.ch/hit-parades