22 June 2018: it’s that time of the year again. As a member of the Cooperative Society SUISA entitled to vote you will be able to decide on the future of your copyright society and to take stock with respect to the past business year at the General Assembly in the Bierhüebli in Bern. By Andreas Wegelin, CEO 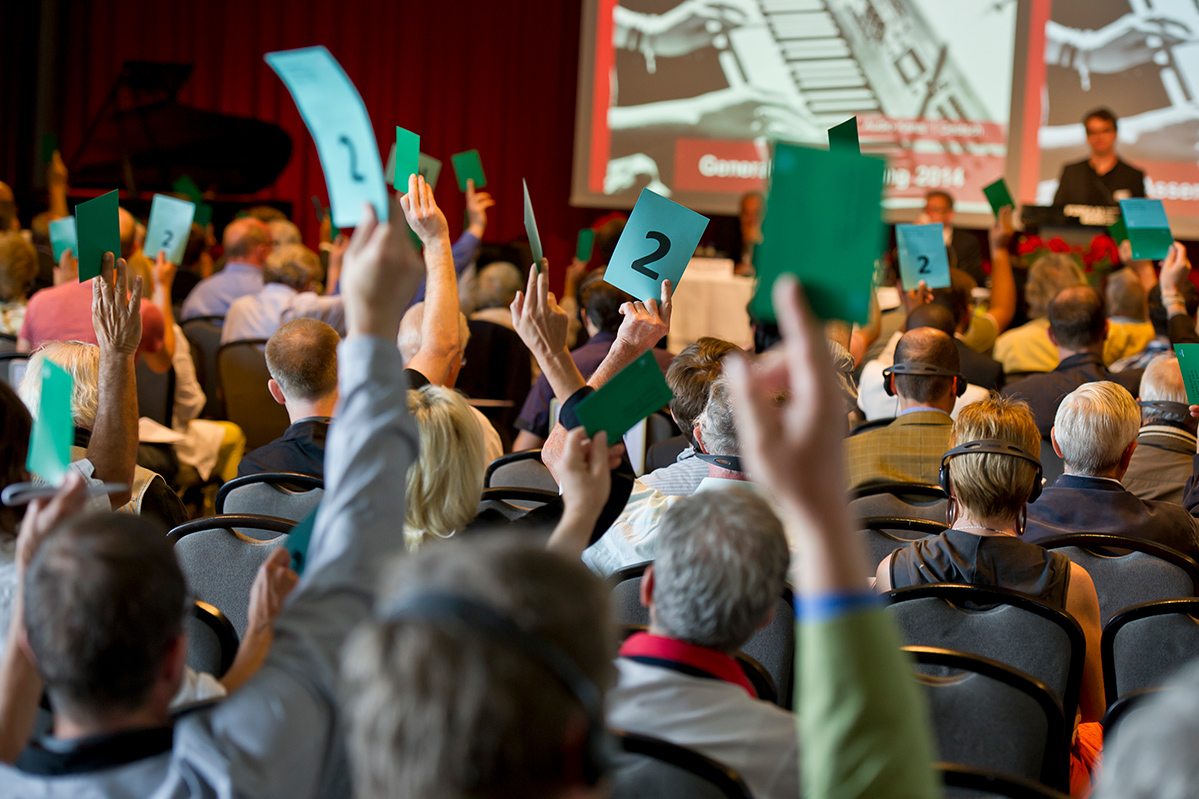 Voting at SUISA’s General Assembly: The umbrella of the co-operative joins the collective weight of authors’ and publishers’ votes. (Photo: Juerg Isler, isler-fotografie.ch)

Cooperative societies are usually alliances of persons or institutions who have the same or similar goals and interests. The idea behind such associations is as simple as it is effective: Together, we are strong! Economic, social or cultural issues that are presented in a unified manner often gain more momentum and impact than just the voice of an individual.

As your Cooperative Society for authors and publishers of music, we can support your interests. The main objective is to generate fair conditions and guarantee a fair remuneration for music creators. Collective management of rights has become an ever more significant aspect: These days, SUISA negotiates with some corporations which act globally. The market power of such negotiation partners may only be faced with the support and strength of a unified community.

Under such circumstances, it is even more positive that 2017 has been the best year in SUISA’s history from a financial perspective. An overall amount of CHF 131.4m in copyright remuneration can be paid out to rightsholders and sister societies. That is more than ever before.

During the coming GA, a revision of SUISA’s Articles of Association is planned for ratification. This has become necessary because a Directive at EU level has been passed with new provisions, especially regarding the transparency of our work. And this is something that affects SUISA, too: SUISA is responsible for Liechtenstein and operates for online usages on an European market level.

During the GA, you are also going to have the oppoertunity to meet the President of Swissperform. She is going to report on the cooperation among the Swiss collective management organisations.

FONDATION SUISA also has got some news on its support activities, and its foundation Director is going to elaborate on that. Finally, the ongoing copyright law revision is expected to be a topic for discussion, since hearings took place among the parliamentary committees last April and May.

All of these topics will be covered by our SUISAblog and SUISAinfo, one of which you are currently reading. Of course, you’ll find out more information and more details if you travel to the GA in Bern. I look forward to welcoming as many of you as possible in person then.