Saxophonist Bertrand Denzler is always working on new opportunities to express himself in the delicate balance that lies between improvisation and composition. The 55-year-old musician from Geneva, who is now resident in Paris, now intends to extend the frontiers of his artistic dialogue with others even further using “roaming residencies”. FONDATION SUISA is supporting this project financially with Get Going! funding. Text by guest author Rudolf Amstutz 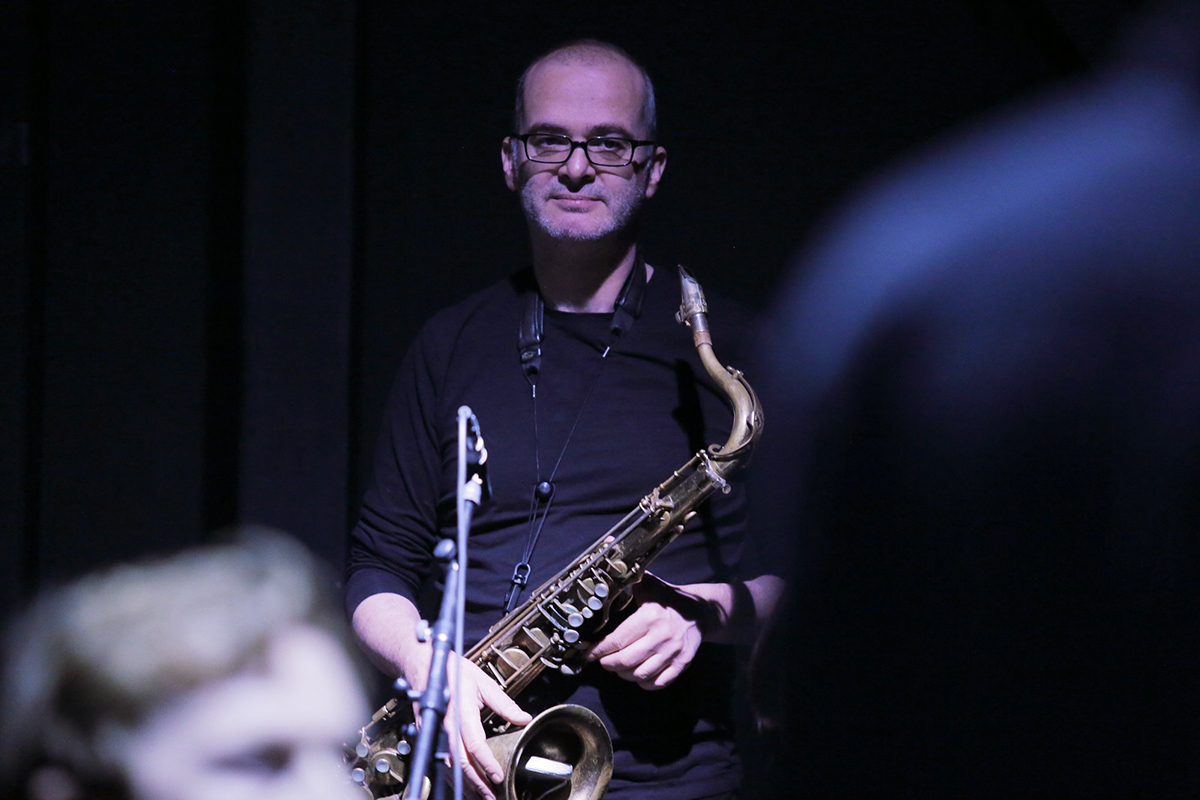 “Tireless”, “adaptable” and “industrious” are just three words that could be used to characterise the artistic craft of Bertrand Denzler. Anyone checking out his website for the first time could be forgiven for thinking the sheer number of projects and line-ups might be their kiss-of-death. Denzler laughs: “I’ve laid the whole thing out somewhat more clearly in the meantime.” In fact: on second glance, it all makes sense. And anyone taking the next step of dipping into the sounds available online will hardly be able to resist Denzler’s artistic vision. At first, the finely balanced sound sculptures seem to reveal a welcoming kind of simplicity. But in the background lurks a complexity with a tremendous pulling effect that is almost hypnotic.

“My compositions are not primarily about the narrative form, but the inner structure. This means my pieces might seem relatively simple, but they are not easy to play. The musician should not be distracted by far too many ideas, but should be able to concentrate fully on the sound and its precision,” is the way Denzler explains his intentions.

He classifies his process-orientated compositions as “spaces”. For the most part, they do not feature traditional notation, but are predetermined by their structure. “I want musicians to be involved and have to think for themselves”, stresses Denzler. He adds: “Often it is just the time structure that is specified, and not the rhythmic structure. The predetermined rules always open up lots of opportunities.”

Denzler practises this “space surveying” with the simultaneous exploration of the ambient sound with very different line-ups, including the Sowari Trio, Hubbub, Denzler-Gerbal-Dörner, The Seen, Onceim and Denzler-Grip-Johansson. At the same time, he is not averse to trying new things, including improvising as a guest musician in such line-ups as Jonas Kocher’s international Šalter Ensemble, in a duo with Hans Koch or quite simply solo.

Denzler actually considers his career to be somewhat typical of a European musician of his generation. He started out with classical music, but at the same time was listening to pop and rock in private. However, an outright thirst for knowledge also made him aware relatively quickly of the most varied ways in this world that music can be played. “And eventually”, comments Denzler, “jazz became my main sphere of activity, because improvisation, in other words implementing your thoughts in real time, fascinated me”.

After jazz came free-form music, even if Denzler is still to this day impressed by the philosophy and improvisational approach of such greats as Albert Ayler and John Coltrane and will probably continue to be influenced by them. As opposed to many improvisers who never return (if they have occasionally diverted from a compositional approach), Denzler has found a space where he can keep creating new things architecturally from the delicate balance between improvisation and composition. “In the last ten years, I acquired the feeling that I am always improvising in the same system. Suddenly, I once gain felt compelled to build structures within my music.”

Denzler’s artistic vision is not only a kind of journey of discovery in a metaphorical sense: he wants to transport this “space” to different geographical locations as a “roaming residency”, so as to meet other musicians there and create new music with them. Up to now, the project has failed, not only for financial reasons, but also because such an open project does not comply with the general conditions of traditional subsidies policies. Start-up funding from a FONDATION SUISA Get Going! grant is now making realisation possible, because, according to Denzler, “… it allows me to pursue my creativity instead of predefined conditions”. Beaming with delight, he adds that it’s as if this grant had been specially tailored for him. And in fact his definition almost reminds you of a Denzler composition, in which the structures defined by the creator open up unforeseen possibilities …