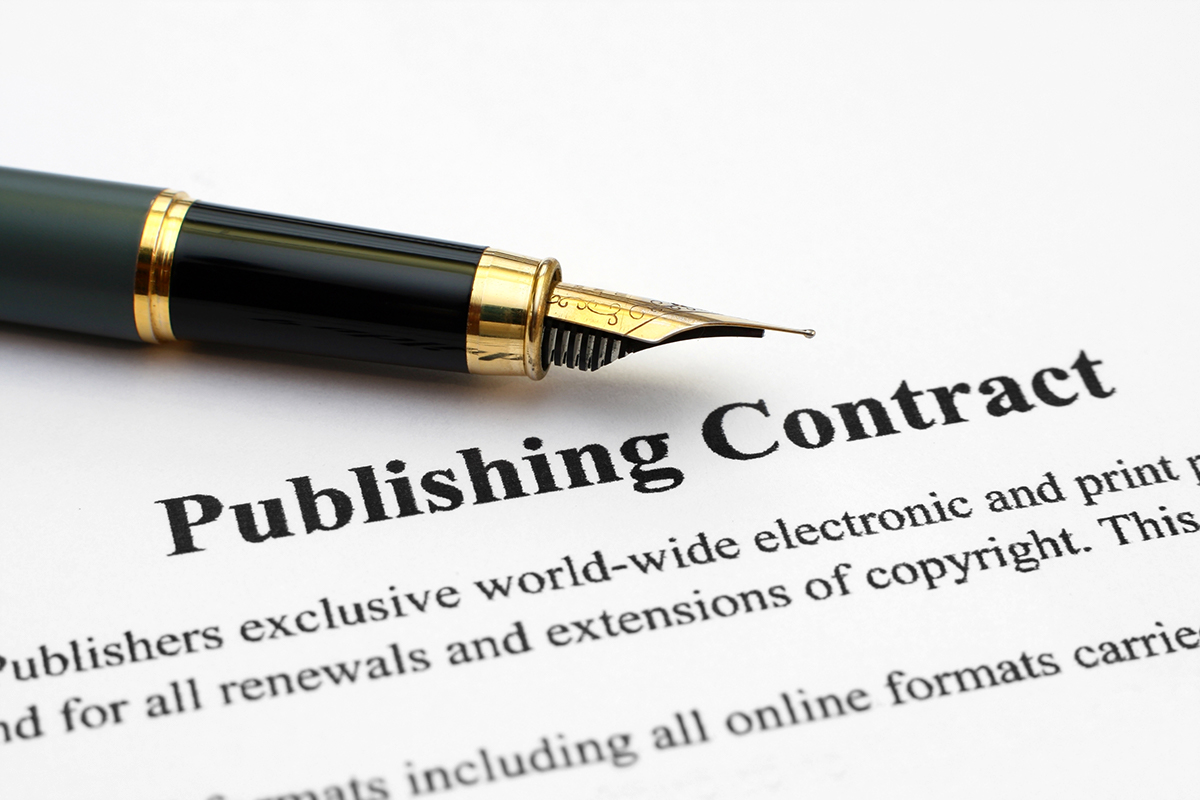 Publishing agreements are concludes between all parties involved in a work: authors (composers, lyricists, arrangers) and a publisher. (Photo: Alexskopje / Shutterstock.com)

The publishing agreement is incorporated into the law (Art. 380 ff. OR). The legal provisions are, however, not mandatory, and the parties have a lot of room to manoeuvre for the negotiations prior to signing the agreement. In cases of doubt, it might help to refer to the commented version of the SUISA model agreement.

Publishers can be referred to as the “managers of a work” – as the entity or person whose duty it is to promote the work. They seek to maximise usage and exploitation, e.g. in the form of radio broadcasts, synchronisation with audiovisual works and sales of music score. In return for this promotional activity, publishers who are members of collective management organisations (CMOs) benefit from part of the royalties for the usage of the works. The publisher is thus included in the works registration as an interested party and obtains a percentage of the work remuneration.

Entering into agreements and contracting parties

SUISA’s model agreement can be used as a contractual basis and adapted as required, but usually, each publisher has its own agreement. SUISA members have the opportunity as authors or publishers to have SUISA’s legal department check their agreement prior to signature free of charge. Our legal department may correct any disadvantageous provisions and also provide details on the professionalism of the publisher.

The law assumes that the author is the individual that has created the work. This means that a group of authors cannot be considered as authors. Only an individual member of a band can be a contracting party and sign the agreement. In order for the works to be completely integrated as the subject matter of the publishing agreement, all who have contributed to the creation of the composition must therefore sign the publishing agreement.

Furthermore, attention should also be paid to the fact that arrangements of works already published are not automatically published with the same publisher. As arrangements must be protected in their own right according to the law, the publisher must acquire the rights on them in a separate agreement with the arranger.

Term of the agreement

The agreement may be in effect between 3 (minimum duration stipulated by SUISA) and up to 70 years after the death of the author (statutory term of protection for a work). It is generally in the interest of a publisher to sign an agreement which spans as many years as possible, whereas authors are interested in limiting the term covering the assignment of their rights. It is, of course, possible to enter into a three-year-agreement which – if it is not being terminated – can be extended on a rolling basis of one year. Such an option does not require any additional steps.

If you determine the term of the agreement, the investment of the publisher should be taken into consideration, e.g. in cases where music score is being published. In any case, the parties should be aware of how long they are bound contractually. Another important point is to realise how difficult it might be to dissolve an agreement prior to its end date if the parties end up having a conflict. It is absolutely vital that rightsholders inform SUISA in any case so that SUISA can adapt its documentation.

Remuneration for the publisher

The percentage for the publisher is jointly determined by the parties. There is only one mandatory provision: In accordance with SUISA’s distribution rules, the publisher may only receive a maximum share of 35% of the remuneration from performing and broadcasting rights (e.g. for concerts and radio broadcasts). Subject to this reservation, the parties are free to determine the percentage. If no percentages have been entered into the agreement by the contracting parties, those determined by the distribution rules shall apply.

Agreements often do not contain explicit percentages, but rather refer to the applicability of the distribution rules of the respective collective management organisation. In the case of agreements with foreign publishers who register their catalogues with the society in their country, this leads to the application of foreign distribution rules: For performing and broadcasting rights, a publisher in Germany therefore receives 33.33% (GEMA), and 50% in England (PRS).

The international umbrella association of the collective management organisations, CISAC, has set out a guideline for the distribution key between authors and publishers that publishers should not receive more than 33.33% for performances and broadcasts. The 230 CISAC member societies from 120 countries are free to adapt this key. Many societies, such as GEMA and SACEM already apply this recommended distribution. SUISA also wishes to adapt its rules and regulations to this CISAC guideline. The respective application for a change of the SUISA distribution rules has been submitted to the Swiss Federal Institute of Intellectual Property (IPI) at the beginning of 2016. The IPI approval is still pending and would not come into force before 2017.

An “admin publisher”, which merely creates a connection with a collecting society (i.e. completes work registrations, checks distribution statements and possibly submits complaints etc.) should, logically, receive a smaller percentage than a publisher who is also looking after the promotion and placement of the work and the search for a producer.

You should not forget to determine the distribution of such monies that are not being paid by the collecting societies (e.g. for synchronisation rights). These revenues are usually split 50/50 between the publisher and the author. Finally, the author usually receives a 10% share of the income arising from the sales of music score.