The international success with Bonaparte is the current highlight of the long-term songwriter career of Tobias Jundt. He penned several hundred titles, spanning a wide stylistic variety, even for or together with other artists. Born in Berne, and now living in Berlin, the composer passes on his knowledge and experience as a guest lecturer at the Zürcher Hochschule der Künste (Zurich University of the Arts) in the subject “songwriting”. An interview with the SUISA member who has been nominated for the Grand Prix Musik in 2016 and performs with his new formation, Mule & Man, at the Festival Label Suisse in Lausanne. 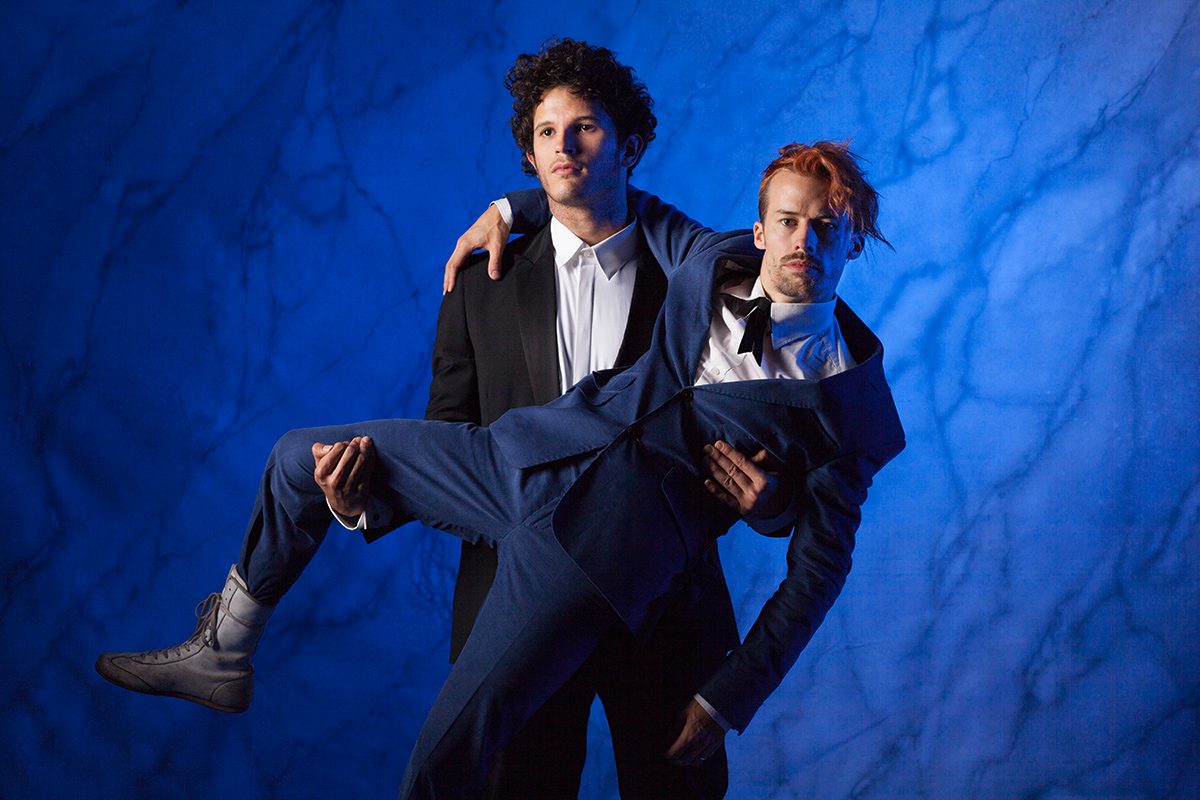 With his new project, Mule & Man, Tobias Jundt (lying down) can be enjoyed together with Kid Simius (standing up) during their live concert at Les Docks during the Festival Label Suisse on Saturday, 17 September 2016. (Photo: Melissa Jundt)

What does the nomination for the music award of the Federal Office of Culture (BAK)?
Tobias Jundt: I am, of course, honoured that my art is recognised and appreciated as such. Especially when you create something that is usually neither here nor there and thus cannot be squeezed into a pigeon-hole, it takes quite some time until you will be recognised as an artist with your own language. With such a huge variety on offer, it is basically impossible to compare or rate the creations of some with the works of others. But after 30 years as a songwriter, I am rather flattered that I am given the opportunity to be a representative of the cultural language of my country as one of the possible musical parts.

The BAK presents the music award 2016 in the run-up to the Festival Label Suisse. The Festival in Lausanne attracts mainly Swiss music from various genres to the stages over a three-day period. Access to the concerts is free. Why does Swiss music need a music award from the BAK and a Festival like the Label Suisse?
I think we should consider ourselves grateful to live in a country where the government takes time to honour the arts and luckily has the necessary change in the pocket to temporarily and considerably simplify the creativity of the prize winners with this award. All of the nominees would continue to relentlessly do what they do anyway, in order to face the high seas of life, even without the award. We should thankfully accept the fact that the BAK supports us with this and provides a silver-lined breeze for our sails.
Festivals are places where you can discover things. The audience discovers music bands, artists meet other artists, collaborations are forged and, somewhere, a Schwyzeroergeli fan falls in love with a Stockhausen follower. Festivals, do, however, never replace an artist’s concert experience a whole evening provides, but they are very important as events where expression can be exchanged and even collide. It is always the right choice to campaign for a broad and liberal-minded culture.

“You need stamina, a tireless will to attack and a stoic persistence when it comes to realise your artistic drive.”

You once said in an NZZ interview that it was only possible to survive in Switzerland with mainstream pop music or in one of the heavily subsidised genres such as jazz or classical music. What has to change so that the diversity of Swiss music creations will attract more listeners, both at home and abroad?
It’s a problem that a musical niche related only to Switzerland is indeed rather small, so that it cannot really be exercised as a main profession but only ‘on the side’. You therefore either have to be active in a genre where you can generate a lot of turnover, or in a subsidised sector, or tackle a bigger territory. The latter requires a lot of stamina, a tireless will to attack and a stoic persistence when it comes to realise your artistic drive. Unless the motivation for this artistic insanity comes from deep within yourself, there is no real driver for the majority of Swiss people to risk their existing quality of life. You do actually have to be a little bit crazy to want to renounce on it at least temporarily in order to plough this rather tough musical field. During my travels, I repeatedly meet very active Swiss expats. It isn’t the talent that is lacking, it is the attitude.

You have been living in Berlin since 2006 and are now settled in there. How can you ‘be’ as a Swiss songwriter abroad and how is Swiss music, in your opinion, perceived abroad?
Most people of this solar system fall in love with Switzerland and what it represents. You often forget about that when you sit on the mountain too long. If I write music for other artists in Berlin or New York, nobody ever asks me where I grew up. The aim is always the same: to write the right work for a specific phase of an artist. That involves either aspects of commercial success or artistic reinvention. And when I perform my songs as a soloist appearing as Bonaparte from Beijing to Wellington, nobody asks me where I am from either – even though I do quite like to add that I am Swiss – especially as it distinguishes me from those out there and because it is an important part of my being. In order to prevail, you need to have an alert mind and soak in and apply the various parameters of the different cultures. Everyone can do that, irrespective of where they’re from.

“I claim that Switzerland has one of the best collective management organisations in the world. SUISA is where I belong as a composer.”

You live in Germany, but you are a member of the Swiss SUISA. Why?
I claim that Switzerland has one of the best collective management organisations in the world – and that’s an opinion shared by quite a few international authors. I say this with a clear conscience and out of my own free will. I was a member of BMI in the USA in the past, and I also run a publishing company which is a member of GEMA. All well and good but SUISA is the place where I belong as a composer. I really enjoyed the time under Poto Wegener and, due to his support, I began looking into copyright more intensively. The good relations to SUISA have stayed in place and I really appreciate the mutual exchange and respect.

You lecture the subject “songwriting” at the Zurich University of the Arts. Can you learn how to write a hit? Which tips do you give students for composing on their way?
I usually advise them to forget everything they think they know. I like to ask them to write songs as humans and not as musicians. Of course, analytical and theoretical knowledge and practical techniques help us to find a quicker way out of musical cul-de-sacs. But at the core of finding ideas, there isn’t much difference between us and Mrs Mountainvalley who whistles a little melody while having a shower in the morning. You can, of course, just like in every situation in life, learn a technique – whether it’s holding a club as a golfer or using Kamasutra positions as a lover – which allows you to write good songs at any old day of the week. But there are many and enough good songs already – you need to rather try to write songs with a certain je-ne-sais-quoi: songs which still have a raison d’etre even to be let loose onto mankind in their genre, even after the life work of a, Lennon-McCartney an Udo Jürgens, an Igor Strawinsky or Daft Punk. This doesn’t always work, but that’s what the songwriter has to get up for each morning – for the attempt to write a song which, in its own way, enriches the world.

“The most important thing that still exists, especially today, is the musical idea.”

A musician on a concert stage is not necessarily at the same time the songwriter, who is often forgotten in comparison with the star in the limelight. How can composers step out of the artists’ shadow when it comes to public perception?
The question is, do they have to. I only sing the songs that I cannot expect others to perform. The psychological pressure that a front man and artists have to sustain, can – in the long run – be rather exhausting. A songwriter, however, can act in the background, sit in front of their piano somewhere, unnoticed, and simply focus on the core of the music. And believe me, the most important thing that still exists, especially today, is the musical idea. Nothing, and nothing at all beats a really well-written song which cleverly combines craft and original ideas. There may be hope for all who thought that there had been too much speak of the devil. I am rather glad that I have a dozen pseudonyms at SUISA – these are songwriter roles into which I can morph depending on the style, genre or mood and that aren’t even known to my closest friends. I like it that professional songwriting sometimes simply remains a secret between the piece of paper and myself. If a musician does something odd on stage, everybody will talk about it the next day. If a composer creates a little string quartet, naked, while eating two spoons of peanut butter, nobody cares two hoots about it. I really like that. It’s important that we as composers exchange our views and that our rights are well represented through the change of the times.

Composing music for third parties or performing with Mule & Man on stage – what’s the thrill for you of these two activities?
I did have some elitist phases in my life, where I only considered this kind of free jazz or that type of soul to be worth listening to. But at the end of the day, I am suffering from musically inflicted polyamory, and love all kinds of music with a passion, but also have to co-invent. I get satisfaction from composing string or wind arrangements, protest songs, punk chansons, film score, electronic music, experimental fiddling about with noise or country music for the deaf. I like it that you can take from this bottomless cornucopia of combinations and possibilities between the composer and the listener.

Arrangement of works in the public domain – Before you start arranging musical works that are not protected by copyright, it is worth being aware of the legal pitfalls in order to avoid costly stumbles. Seeking inspiration from others, arranging existing works for different instrumentation, incorporating all or part of existing compositions into new works … these are age-old practices. What pitfalls have to be avoided when you undertake a musical arrangement? Read more