Members with voting rights can still co-determine the fate of the SUISA Cooperative by casting their votes in writing. Text by Regula Greuter; Videos by Manu Leuenberger 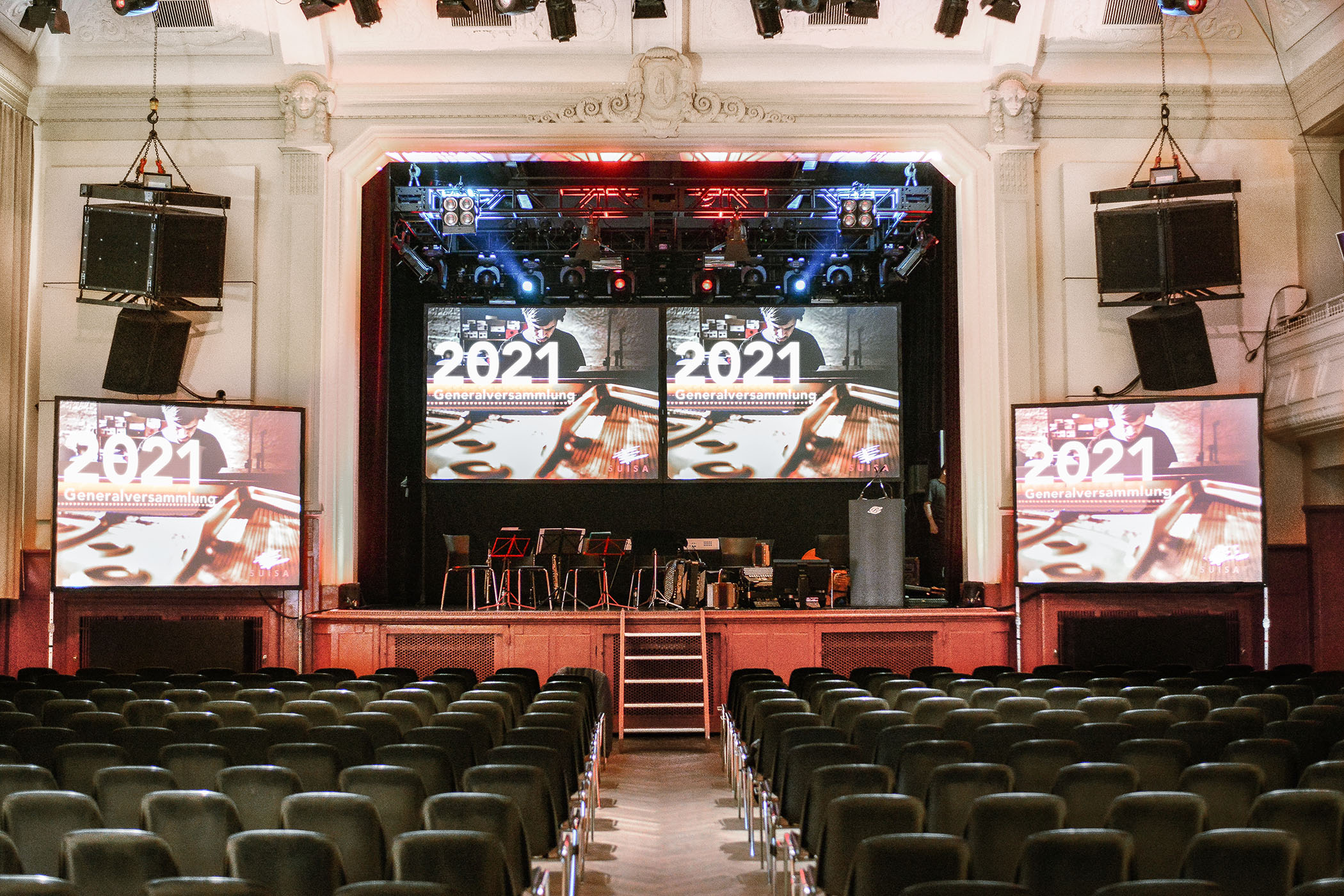 The big room in the Bierhübeli in Berne remains empty: The SUISA “AGM” 2021 will be held based on voting in written format. (Photo: Manu Leuenberger, edited by Likeberry and Schellenberg Druck AG)

Not quite as expected, the Covid-19 pandemic prevents holding a face-to-face General Meeting again this year. The plan was that the Bierhübeli in Berne should be the venue for this year’s event on 25 June 2021. The current situation, however, allows for no reliable planning of the event and the Board of Directors has consequently decided during its meeting on 22 April 2021 that the General Meeting should be held again this year by participation via voting in writing. That way, all members entitled to vote have the opportunity to participate in the AGM without taking a health risk.

From 25 May 2021 onwards, the documents for the General Meeting will be dispatched to all members entitled to vote (invitation to voting by letter, information on the General Meeting including the agenda items and the voting form). From the day you receive the documents you can complete the personalised voting form, sign it and return it to SUISA by letter no later than 25 June 2021 (25th June is the latest date of receipt).

The results of the votes are then counted by the election office headed by Dr. Bernhard Wittweiler (head of SUISA’s Legal Department).

The results of the vote and election will be formally established by the President, the Secretary, the CEO and the Head of the Legal Department on the basis of the count and published on the SUISA website on 30 June 2021.

Apart from the usual statutory business, i.e. ratification of the minutes, decisions on the financial statements, the management report and the annual report of the SUISA cooperative and the SUISA group – the General Meeting will be presented with a motion to adapt the general rules on investment and a surrogate candidate for Géraldine Savary who is stepping down from her post.

Adapting the general rules on investment

Pursuant to the Articles of Association, the General Meeting is responsible for the general investment policy with regards to the collected remuneration (Article 9.2.2 m).

The Board of Directors therefore proposes that the general rules on investment should be supplemented by the criterion of sustainability.

By-election to the Board

Due to Géraldine Savary who is going to step down (former State Councillor SP/VD) a new member for the Board of Directors will be proposed for election. In accordance with the Articles of Association (Article 9.3.2) apart from SUISA members entitled to vote and be elected, “persons who, on grounds of their position or expertise, have a special involvement with SUISA’s activities” can be elected to the Board of Directors. As a consequence, there were active or former Parliamentarians throughout many years who were members of the Board of Directors who bring valuable experience to SUISA with their expertise.

Johanna Gapany started her political career in her younger days. This led her from the General Council to the Municipal Council of Bulle, she took a seat in the Grand Council of the Canton of Fribourg from 2016 to 2019 until she was elected in 2019 as the first woman of the Canton of Fribourg to the Council of States. A graduate in business economics, she brings professional experience as a marketing manager in various companies and as a communications manager in a private hospital in Fribourg.

Even though there will be no physical General Meeting in 2021, members with voting rights will be able to have their say on SUISA’s business in writing. We invite you to use this opportunity and to vote!

All documents and details regarding the General Meeting can be accessed at www.suisa.ch/en/members/general-assembly.html. Questions on the process and the agenda items can be sent to the Executive Committee by e-mail: gv (at) suisa (dot) ch