Due to the coronavirus pandemic, the General Meeting cannot take place in its usual form. However, members with voting rights may still have a say in the destiny of their SUISA Cooperative by casting their votes by letter. Text by Andreas Wegelin 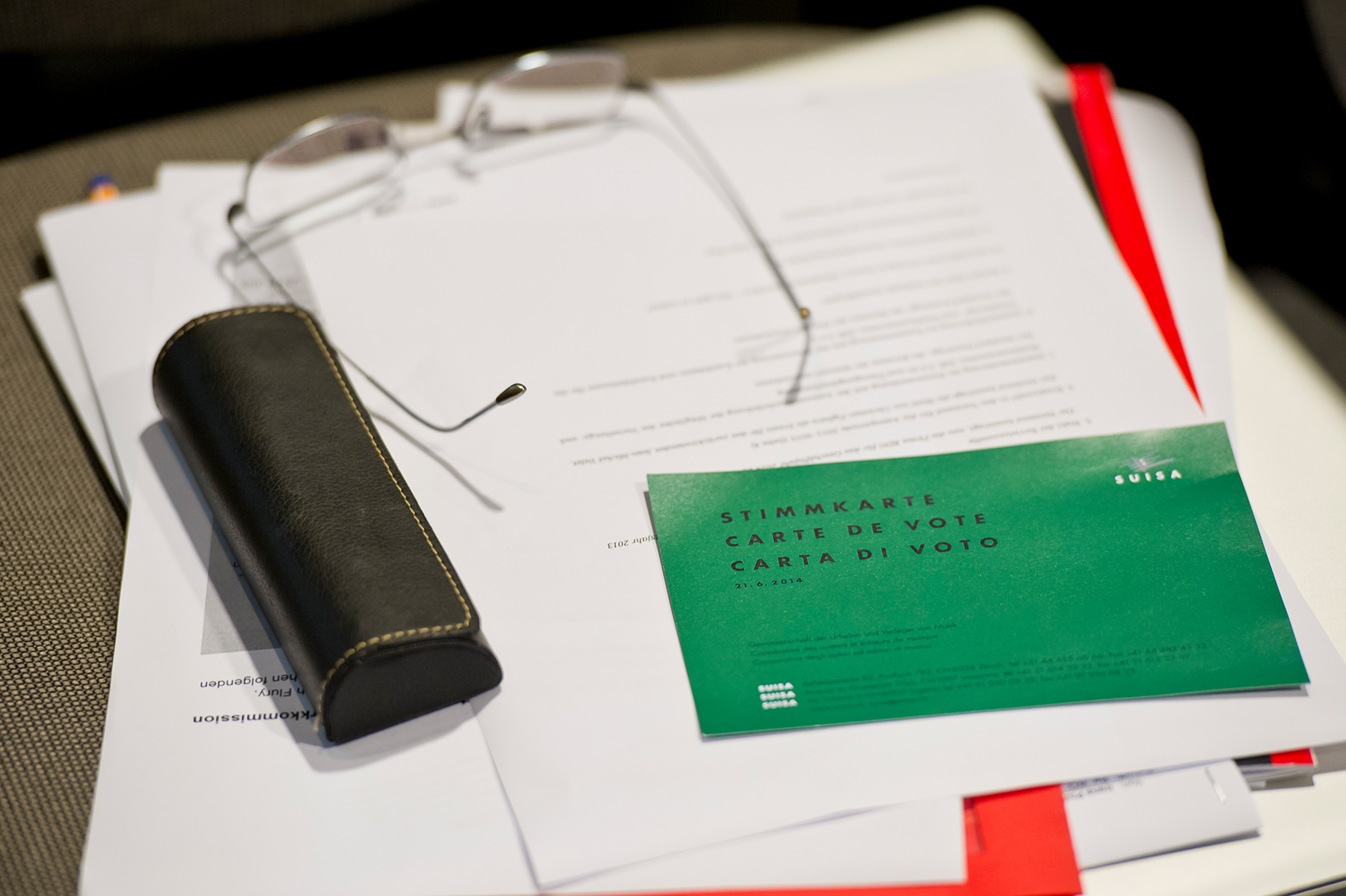 By way of exception, SUISAʼs 2020 General Assembly (GA) will be held by letter: To participate in the vote, members entitled to vote shall return their completed voting form by post, which must reach SUISA by 26 June 2020. (Photo: Juerg Isler, isler-fotografie.ch)

This yearʼs General Meeting, the annual highlight of social life at the SUISA Cooperative, should have taken place on Friday, 26 June 2020, at 11 a.m. at the Bierhübeli in Bern. However, this is not possible because of the corona pandemic, even if it is not yet known exactly when the ban on assembly will be relaxed for which size of events. In any case, the organisation of a general meeting requires a preparation time of about two months.

The Board therefore decided on 29 April 2020 that this yearʼs General Meeting can only be held by correspondence by way of exception. This decision is in conformity with the Federal Council guidelines in the Covid-19 Ordinance 2. In the sense of emergency law, the latter exceptionally permits running an GA in such a way, although the process of forming an opinion will be restricted due to the fact that there will be no “live” discussion at the GA.

From 27 May 2020, all members with voting rights will receive an invitation by mail to participate in the postal vote on the resolutions of the General Meeting. The members entitled to vote have the opportunity to return the completed personalised voting form as soon as they receive the invitation. The letter with the voting form must reach SUISA by 26 June 2020.

The results of the votes are then counted by the election office headed by Dr. Bernhard Wittweiler (head of SUISAʼs Legal Department).

On 30 June 2020, the results of the vote and election will be formally established by the President, the Secretary (who will be in charge of the minutes), the CEO and the Head of the Legal Department on the basis of the count and published on the SUISA website on the same day.

The submitted voting documents are confidential and will be kept until the end of the period of appeal (two months after the resolution is passed, 31 August 2020) and then destroyed.

2. Agenda of the vote by correspondence instead of the 2020 GA

In addition to the usual statutory business – acceptance of the minutes, resolutions on the annual accounts, the management report and the annual report of the SUISA Cooperative and the SUISA Group – two seats on committees must also be filled.

2.1 By-election for the Board
Our long-standing board member Reto Parolari passed away suddenly and completely unexpectedly on 15 December 2019. The Board proposes to elect Melanie Oesch as successor to the Board.

Melanie Oesch grew up near Thun in the canton of Bern and attended the music high school in Thun. She appeared on stage for the first time at the age of five and inspired the audience with her unique tongue twisting. With her many ideas and plans, Melanie is, in many areas, the creative mind at Oeschʼs die Dritten.

Oesch’s die Dritten are a Swiss folk music group from the Bernese Oberland, consisting of Hansueli and Annemarie Oesch, their children Melanie, Kevin and Mike and accordionist Urs Meier. Their breakthrough in the German-speaking world came in 2007: Oeschʼs die Dritten won the young talent competition of the “Musikantenstadl” and since then have been a regular guest in various folk music programmes on television and at major folk music events. In October 2008, they won with the Ku-Ku yodel in the SRF-1 programme “The greatest Swiss hits”. Melanie Oesch revolutionises a certain form of yodelling and contributes to the spread of folk music through her musical activity. Among other things, she was an exceptional yodeler in Stefan Raabʼs “TV total”. Then there was the duet with Helene Fischer, in their Christmas show 2016, which convinced fans and non-fans alike. As an author, she has published two childrensʼ books together with the illustrator Christina Wald.

2.2 By-election for the Distribution and Works Committee
At the last General Meeting, Grégoire Liechti was elected to SUISA’s Board of Directors. He therefore resigned from the Distribution and Works Committee. The Board proposes Michael Hug from the publishing category as replacement. He is the Managing Director of Ruh Musik AG and leads the family business, founded in 1910, in the 4th generation. Ruh Musik is nationally and internationally known for the publication of brass music; the catalogue also includes numerous works of classical and choral music. Ruh Musik is a sub-publisher for several renowned brass music publishers and has also expanded its catalogue in recent years to include publishers such as Edition Cron Lucerne and Belgano.

Michael Hug and his wife took over the company from his father in 2009. He recognised the signs of the times early on and digitised his entire catalogue. In 2012, he was awarded by the FONDATION SUISA as a publisher for his digital distribution platform for sheet music; the jury particularly praised his innovative spirit and sustainable concept.
Michael Hug is 55 years old and – like all his predecessors in the publishing house – is also musically active himself.

Even in times of crisis, shaping SUISAʼs future is important. For once, those members who would otherwise be prevented from attending the General Meeting may also participate in the written voting process. We hope that many will participate. Information on the General Assembly as well as documents and records can be found at: www.suisa.ch/en/members/general-assembly.html