During SUISA’s ordinary General Assembly on 24 June 2016 in Berne, the review of the Pension Fund Regulations was ratified by SUISA members. The changes came into force per 01 January 2017. What do the new regulations mean for our members? Text by Irène Philipp Ziebold 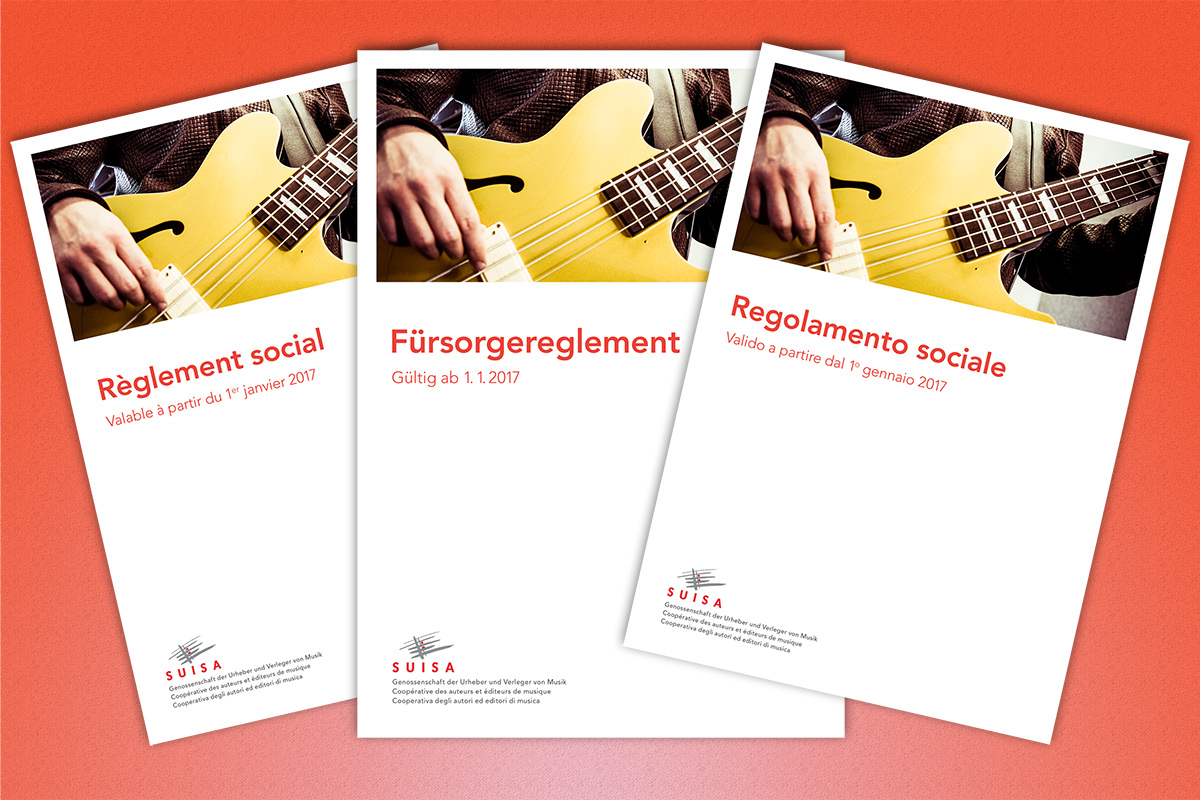 The current regulations for the SUISA Pension Fund for Authors and Publishers is available in Italian, French and German on SUISA’s website. (Image: Manu Leuenberger)

There were various reasons for SUISA tabling a review of the Pension Fund Regulations: The old regulations set off discussions time and again on whether they sufficiently reflected practice, and that the wording was not specific enough. These issues could be remedied with the review. On top of the above issues, the regulations had to be adapted to the current legislation (Federal Law on Occupational Retirement, Survivors’ and Disability Pension Plans/foundation law). Following these amendments, we now have a set of current and fair Pension Fund Regulations.

This is what the system now looks like for our members:

The Pension Fund for Authors and Publishers (UVF) provides for pension support for our members and affiliates. Once they have reached their pension age, a payment to authors and their respective survivors is guaranteed subject to specific conditions and up to a specific amount at previous levels. The UVF pays such guaranteed income as a pension benefit in such cases if less or no remuneration at all is paid in the course of ongoing distributions. In contrast to a support for the second pillar, the UVF fund only finances the part which authors do no longer receive from the ongoing SUISA distributions.

The UVF fund guarantees authors an income from SUISA when they reach pension age. This is calculated based on the annual average of their previous earnings from the SUISA distributions (the so-called reference income), depends on the membership length and is also multiplied with a factor to be determined by the Pension Board.

The effective pension payment corresponds to the difference between the reference income and the SUISA remuneration in the pension year. The level of the guaranteed income is set at a maximum of CHF 38,500 per annum. Those who receive royalties of more than CHF 38,500 from SUISA distributions for performances and broadcasts, even at pension age, will not be eligible to benefit from the UVF.

The fund is financed by the deductions that SUISA makes from all distributions of the collections arising from performances, broadcasts and compensation claims in Switzerland and Liechtenstein (7.5%).

SUISA also makes a deduction on behalf of publishers for the UVF. The UVF thus also provides for pension benefits for publishers if they fulfil the conditions in terms of publishing activities in Switzerland. Publishing companies can, however, not be pensioned. As a consequence, they receive benefits from the fund as soon as they are accepted as affiliates and/or members of SUISA; these benefits are made in the form of contributions to their own occupational benefit institution of the second pillar. It is important that publishers inform SUISA about their occupational benefit institution and submit the relevant payment details.

There are no fundamental changes to the SUISA benefits system. The most important changes, apart from some specifications and formulations, are:

On SUISA’s website, under www.suisa.ch/fuersorgereglement the new regulations as well as a synoptical representation is available, comparing the old and currently valid regulations with the relevant amendments and comments.