After some intensive negotiations, SUISA and the association of concert organisers have agreed on a new concert tariff. The new Common Tariff K shall replace the tariffs CT Ka and CT Kb still valid until the end of 2016, and enter into force on 01 January 2017. Text by Chantal Bolzern and Manu Leuenberger 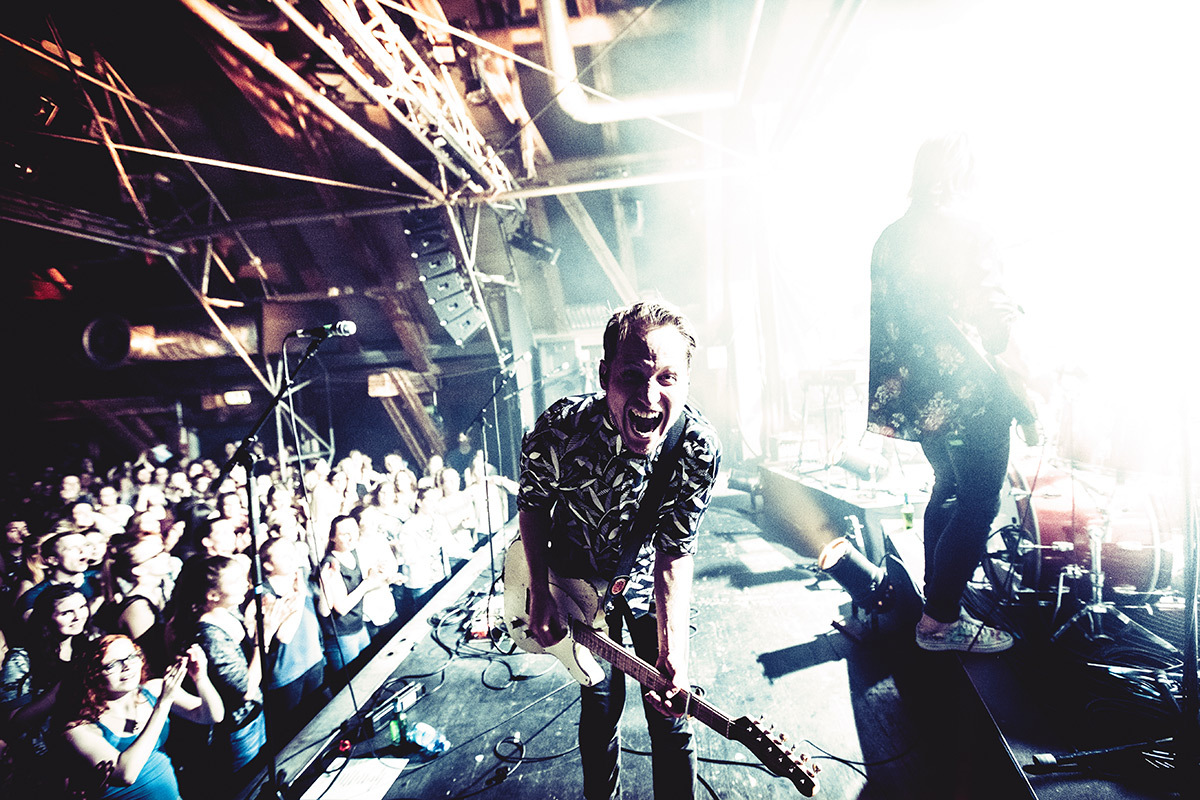 According to the SMPA index, Swiss music on Swiss concert stages has been on the upswing (pictured: Stefan Buck during a sold out gig by the band Band Hecht on 24 March 2016 in the Lucerne concert house Schüür). A new concert tariff for the remuneration to composers and lyricists of the performed songs shall be in force with effect from 2017. (Photo: Tabea Hüberli)

For six years now, the applicable Common Tariffs Ka and Kb have already been in place for concerts, shows and theatre performances. The music business and together with it, the concert market, have progressed further in the meantime. It was time for a new concert tariff which takes the current conditions in the live business into consideration. As always, whenever negotiations are on the cards, SUISA intends to simplify the tariff landscape. This means: reducing the number of tariffs and streamlining structures.

Tariff negotiations for the new concert tariff with the SMPA, Petzi, the Swiss Stage Association as well as other significant trade associations had started in February 2014. After intensive discussions, SUISA and the associations of the concert organisers managed to agree on a new concert tariff in April 2016. From now on, there is only one Common Tariff K which shall replace the two old tariffs Ka and Kb, and enter into force with effect from 01 January 2017.

By way of agreeing this new tariff, SUISA has achieved the intended simplification: There is now only one tariff instead of previously two. The advantage for customers is that they can now locate all the answers relating to their concerts, irrespective of the size of the event, in one single tariff. The animated exchange with representatives from the concert sector had another positive aspect i.e. that important customer concerns – such as tiered licence fees depending on the type of event – could be taken on board and have influenced the creation of the new tariff.

Financial importance of the concert market for SUISA members

The agreement is good news, not least because the concert business has a great significance for SUISA members. The concert and festival landscape in Switzerland is in full swing. SUISA licences more than 20,000 concerts and festivals and looks after nearly 10,000 concert organisers and stages. In 2015, the income from tariffs Ka and Kb amounted to CHF 20.3m. These two tariffs thus nearly made up half of SUISA’s total income from performing rights (CHF 46m).

The financial importance of the Swiss concert market can also be illustrated by means of some figures from the SMPA index for 2015. The SMPA index is issued by the Swiss Music Promoters’ Association. According to their own accounts, members of the association for professional Swiss concert, show and festival organisers more than 80% of the tickets sold in Switzerland were for concerts, shows and festivals.

In line with the 2015 index, members of the SMPA sold 3.6m tickets to an audience amounting to 5.2m of about 1,700 events. At an average ticket price of CHF 78.65 they reached a gross turnover of approx. CHF 357.7m which represents an increase of 11.5% compared to the previous year.

It is positively noteworthy that the number of Swiss artists who are hired for the events has, according to the SMPA index, continued to rise. As such, 1,087 Swiss Acts as well as 1,687 foreign artists participated in SMPA events in 2015. Since 2011, the number of Swiss artists hired for these events has doubled, as per the information provided by the association in a media bulletin dated 21 April 2016.

Irrespective of whether Swiss or international artists perform: The new concert tariff CT K shall apply for all events which take place in Switzerland or the Principality of Liechtenstein. Even if the two old tariffs (Ka and Kb) have been contracted to one new tariff, a lot is still the same.

As previously, SUISA will continue to request set lists in future, so that the income can be distributed correctly to the composers and lyricists of the pieces used in the performance. In 2015, SUISA processed 360,000 works arising from the set lists of such events. Based on the set lists, the income from tariffs Ka/Kb could be distributed, resp. paid out to the rightsholders of these works.

The difference between major events and small concerts

In the new concert tariff, the 10% discount continues to apply for all customers if they are members of an association (such as SMPA or Petzi), which support SUISA in its work as mentioned in the tariff wording. As before, major events are distinguished from small concerts. In a nutshell: For small concerts, the volume discount continues to be applicable, but there are no tiered licence fees. For major events, new, tiered licence fee rates have been introduced, but the volume discount has been discontinued.

In practice, this means: Organisers of small concerts are granted up to 20% volume discounts in addition to the association membership discount if they regularly organise concerts. In the case of major events, however, newly tiered licence fee rates for different event types such as concerts, open air festivals, shows, theatre performances etc. shall be applicable. Depending on the type of major event, the base licence rate varies between 3% and 10% of the gross income generated by ticket sales.

With this innovation of the tiered licence fee rates, the diverse significance of music in major events is taken into consideration. The negotiating parties agreed that an open air might essentially depend on the programme and the performing artists, but that the choice of the grounds and additional offers also contribute to the atmosphere and success of a festival. In the case of stadium concerts, on the other hand, artists work with screens, choreographies and elaborate light shows which differentiates them from acoustic concerts in a more intimate circle. Finally, the versatile use of music in the cabaret sector or in theatre performances had to be duly taken into consideration.

Approval and validity of the new tariff

The new Common Tariff K is yet to be approved by the arbitration tribunal in charge, the Federal Arbitration Commission (ESchK) so that it can enter into force with effect from 2017. Once it has been approved, the new Tariff CT K shall act as the basis for the remuneration for music in concerts, shows, and theatre performances etc. which are performed after 01 January 2017. Any events performed up to the end of 2016 shall still be licensed based on the existing Common Tariffs Ka and Kb.

All event organisers that have an agreement with SUIA shall receive a letter with further details on the new tariff in order to facilitate their budgeting of the events in the next year. It is also planned to provide further information via SUISA’s publication channels.