Soak up as much as possible and then process it. That is Michel Barengo’s creed. The 37-year-old Zurich resident will have nothing to do with any comfort zones and now, thanks to the Get Going! grant, can pursue his creative urges on the Japanese underground scene. Text by guest author Rudolf Amstutz 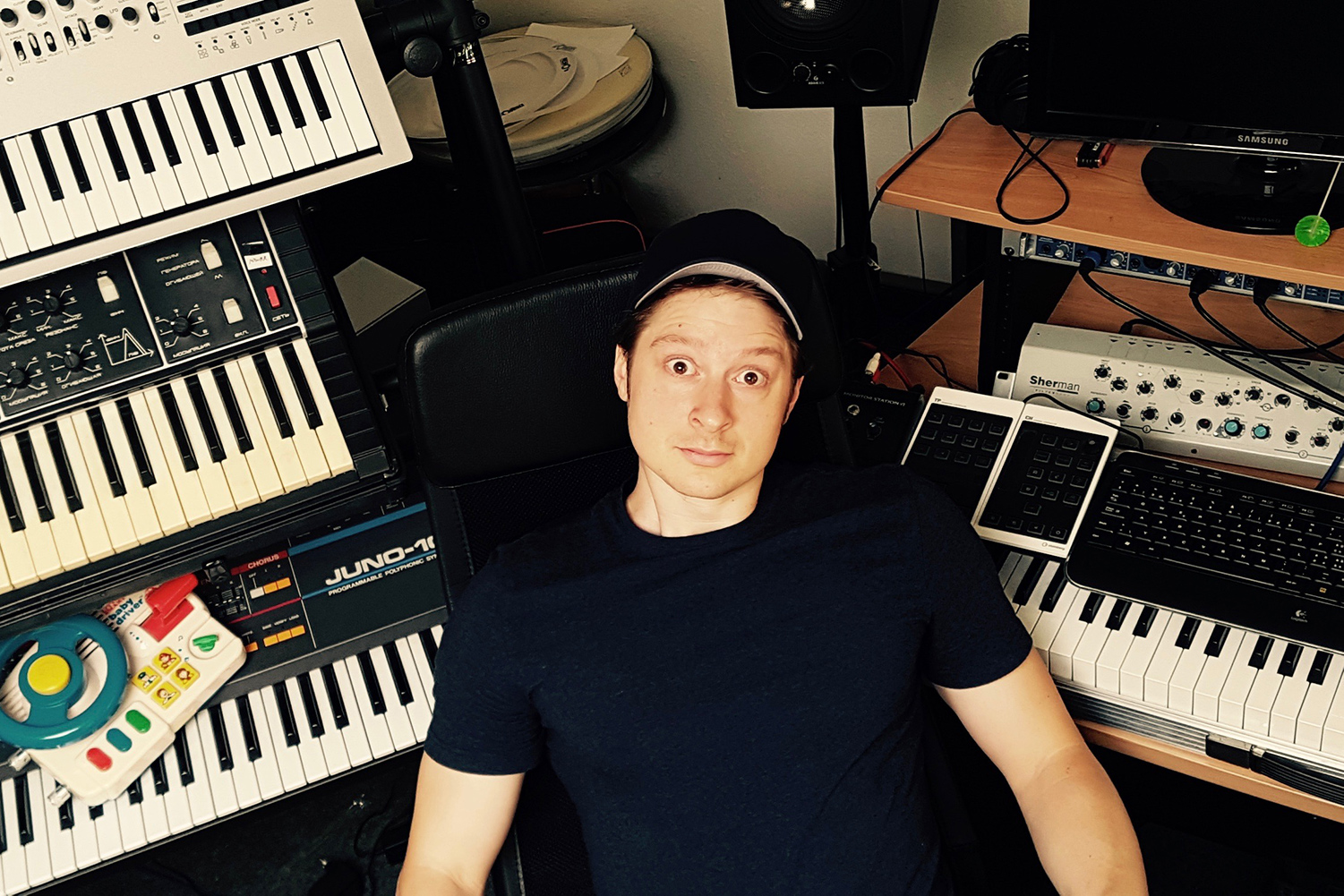 Cowbells, the bleating of goats, squeaky doors, cackling hens, the gentle rustling of the wind in the trees, police sirens or lapping water: there is nothing in the world of sound that would not be of interest to Michel Barengo. He is a tireless collector of sounds who has created a substantial audio library of all kinds of sounds in his home studio. “Just sit for ten minutes in a bus station with your eyes closed. It’s incredible what is going on there,” he beams and the passion of this sound architect is unmistakeable from the way his eyes light up.

Now, the 37-year-old Zurich resident is not only a tinkerer with a tendency to make his own music, but is also one of the most in-demand protagonists when it comes to soundtracks for video games or sound backdrops for the theatre. In 2016, he won the FONDATION SUISA prize for the best video game music. But such commissions are just one part of the work of this jack-of-all-trades, who promotes his distinct musical identity with clear ideas.

The skills he has developed enabling him to implement his creative ideas professionally are very impressive. At the age of five, he started playing the violin and drums and afterwards he played in various garage bands with his brothers. They played punk, metal and alternative rock. Influenced by Mr. Bungle and Fantômas, the projects of Californian singer Mike Patton, Barengo followed his path and inevitably discovered the music of New York experimental saxophonist, John Zorn. “Grand Guignol”, the album by Zorn’s band Naked City, was, without a shadow of a doubt, the most influential experience in the still young Michel Barengo’s life. In a primitive yet subtle manner, Zorn deconstructs and reconstructs the music at breathtaking speed and creates an explosive sound cloud that has never been heard before from countless tiny fragments.

“Zorn’s affinity with the Japanese underground led me to begin to take more and more of an interest in the grindcore and experimental scenes there. Bands like Ground Zero, Korekyojinn and Ruins with Tatsuya Yoshida on drums, as well as Otomo Yoshihide on turntables and guitar. That was decisive when it came to my own experimental pieces, ” explains Barengo. The influences in both of his band projects, the jazzcore trio Platypus and grind noise band Five Pound Pocket Universe(5PPU) must not be overlooked.

The facts that Barengo can move with ease through his sound cosmos and can build bridge after bridge between his own artistic path and his commissions, over which he dances nimbly, are to do with his professional training. He trained as a jazz drummer at the Winterthur Academy for Modern Music (WIAM) and at the Zurich University of the Arts (ZHdK) he obtained his Master’s in composition for film, theatre and media.

Whether opulent sounds reminiscent of Hollywood for a video game, roughly honed small pieces with his band 5PPU or finely crafted sound sample collages with Platypus: Barengo’s eclecticism is invariably fed by his urge to create a completely distinctive aesthetic. One that denies predictions and will not allow the listener to get any peace, because behind every individual sound another one might be lurking which surprises, questions or totally remaps the path laid down beforehand at lightning speed.

The nature of the work is also motivated by the character of its creator. “I’m a restless person,” comments Barengo about himself. “There is so much that interests me. I also get bored quickly. I simply have to try things. Ultimately, that’s what drives you: soak up as much as possible and then process it. I like extremes and lots of variety,” he says and then adds, laughing: “It’s probably all down to the fact that I heard ‘Grand Guignol’ when I was just 13. That’s what it did to me.”

Barengo only feels good when he goes out of his comfort zone. And his Get Going! project is also based on an area of tension with two extremes. It has to lead him to a place where tremendous creative tension in the discrepancy between tradition and modern has prevailed for centuries. Barengo’s love of the Japanese underground led him to visit this country around a dozen times and now he wants to get a three-part project going there. “I actually have in mind a project in three phases consisting of two periods of residency in Japan followed by one in Switzerland for reviewing the work and processing it further,” he explains. “Firstly, using improvisation sessions with the Tokyo underground scene, I would like to get to grips with Japanese traditional music and its integration into contemporary music. After this I will meet up with 12 Japanese musicians in 12 hotels, with whom I can record a track in one room consisting of noises I recorded in that particular hotel. And last but not least, back in Switzerland I will review all the material I recorded, archive it for future composition projects and process it for my personal sound library.” The thrill of anticipation about this is great and all thanks to being able to bring it to fruition with financial support from the Get Going! award. “My project doesn’t fit into any existing categories. It’s neither an album production nor a tour. And it’s not working in a studio either. As I follow my creative path, Get Going! frees me from all constraints and compromises. Quite simply ingenious!” he beams. And even though his journey now had to be delayed until next year due to the coronavirus: back at home, the sound collector and tinkerer is unlikely to lose his ideas quickly.