The Swiss composer Niki Reiser received the CHF 25,000 Film Music Prize of the FONDATION SUISA in the course of the International Film Festival in Locarno. The prize was awarded to him for the film score accompanying Alain Gsponer’s film version of “Heidi”. The composition process for this film score has been a particular challenge for Reiser. The themes “Heidi” and “Switzerland” were rather inhibitive than inspiring in the beginning, as he tells us in an interview. 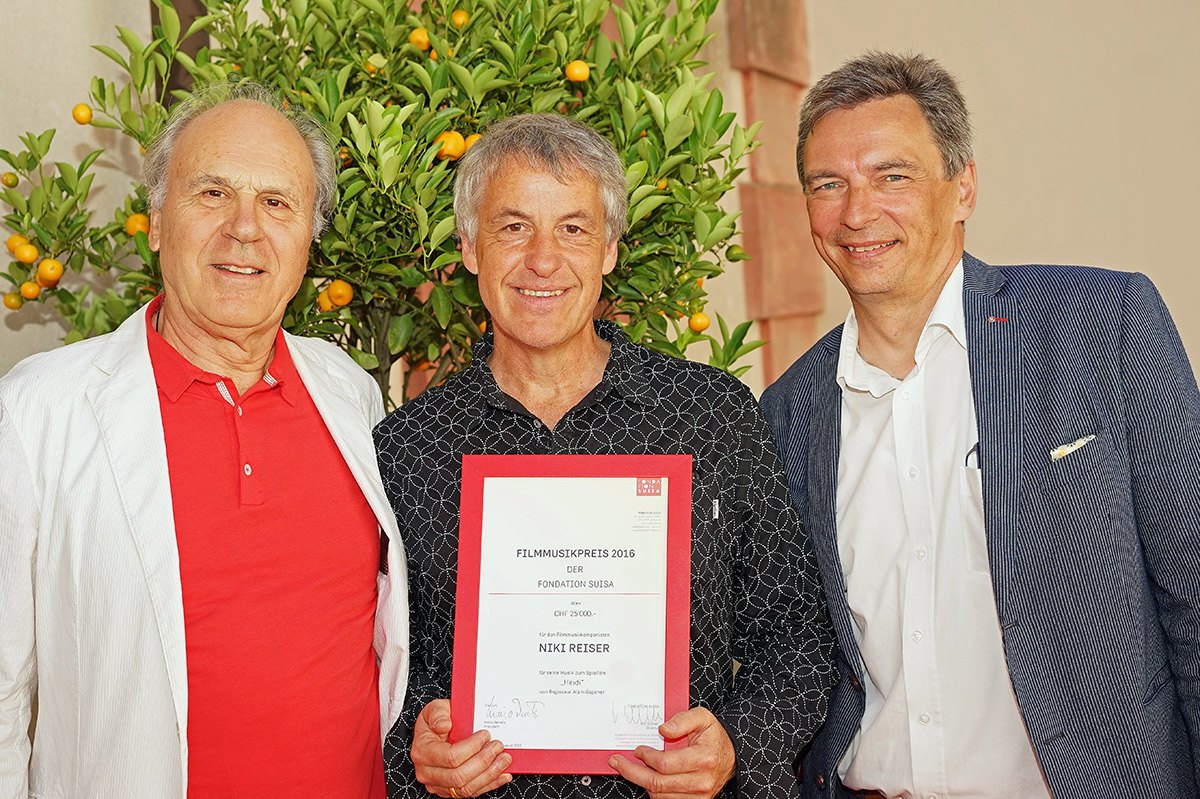 Niki, you won the FONDATION SUISA Film Music Prize for the third time for the soundtrack to “Heidi”. What kind of thoughts crossed your mind first when you heard about this?
I was really happy, of course. In 2001, I received my first award from the FONDATION SUISA. The fact that I still provide quality 16 years later and won a prize with it, has made me very content. It’s a confirmation that I am still a part of the game. And it also means a lot to me that such a competent jury has chosen to award me.

Film composers are usually in the background. The public mainly knows about the actors and directors. Is it important to you that your creations become more known by receiving such awards?
Of course, that is a lovely effect. However, it means much more to me if the audience comes to me after a movie and tell me how the music particularly stood out to them. The fact that people perceive the music in films, that’s more important to me. There is a saying: “You don’t notice good film score”. It is my aim to make people notice film music without it pushing too much into the foreground. The award is now a bit like the icing on the cake. And the great thing about it is that people come to me again and tell me: “The music in this film was really great.” Music was thus not just in the background.

You have also performed on stage as a flute artist in various formations, and thus played your compositions live in front of an audience. Do you miss the direct feedback from the audience?
Yes, I rather miss the opportunity to develop my own pieces and interpret them anew each evening. With film music, that’s different: Once it has been recorded and mixed, it cannot be changed. In the case of live music, you can change a piece, depending on the changing times – that’s something I do rather miss. On the other hand, you are restricted when you play in bands, by the predetermined themes, whereas that is not the case for film music. Each film has a different theme.

In your acceptance speech during the award ceremony, you mentioned how difficult the process of composing was for you. What was special about said process? How did you approach composing said film music?
What was special for me was the fact that the themes “Heidi” and “Switzerland” initially inhibited rather than inspired me. Besides, you are always more critical vis-a-vis your own creations and quickly jump to the conclusion whether “something works and something else doesn’t.” You restrict yourself. If I had made a movie with African music, I would have been freer, as the topic wouldn’t have been so close to me. And the beginning was the hardest. The film starts with a flying scene. The goal: “Now you have to create something light, airborne.” In moments like these, I shut off, as this is a huge challenge from naught to sixty. The core of the music only emerged through constant trial and error.

So you did get specific instructions how the film score was supposed to sound?
Not what it should sound like, but the effects it should have. The music should have had some lightness and elements of hovering. At the same time, it was supposed to express a longing, yet have something healing about it. The more adjectives you have in your head, the less musical ideas will come to you. It usually only works once the rational thinking stops and you start making music. It is via making music that I discovered film music.

Childrens’ films, sentimental films with a regional character, and nice images of the Alpine world – don’t you get tempted to fall back on existing musical clichés?
Of course, the images are really rather out of this world. If I had composed a typical Swiss music to accompany them, it really could have turned into some form of a commercial film. That is why we have decided not to use a typically happy Swiss major key. While I think Swiss melodies are rather nice, I did not want to write a folklore song. By using the minor keys, we reached a more dramatic effect. Heidi, is, after all, a drama, not just a childrens’ film.

There are many film versions of Heidi. There are also some well-known Heidi film melodies. The majority of people in Switzerland thus have a connection – even a musical one – with Heidi. Did this also influence your work?
No. I have, on purpose, not watched any older Heidi films. On the one hand, so that I would not be influenced. On the other hand, so that I would not obstruct myself: It is possible that you don’t do something just because someone else has already done it. I have told the story based on the Heidi character. This means: The music accompanies the emotions of Heidi and reflects her current emotional state. It is thus more an emotional, and not a Swiss story. I have tried to set the music so as if a child is enjoying its very emotions in a moment.

You have composed music for a film for the first time 30 years ago. In the meantime, technology has changed dramatically. How has this influenced your work style when you compose?
It had no influence on my work for Heidi; I have recorded each instrument live and not used any sound generating technology. In the case of other films, especially smaller projects, my work style has changed. I can now record the music in my home and arrange it from there. That way, I can execute the entire film production at home. My way of composing, however, has not changed due to technological developments. The goal is still to search for themes and sounds. Compared to composition, the dialogue process with the cutters’ workplace has changed. If I have composed something, I can send entire files with images via internet and about half an hour later discuss them with people sitting at the cutter’s table via skype. In the past, I had to send the tapes in the post. It took a week until the material arrived and another 3 to 4 days until the director sent their reaction. Communication speed has definitely increased. This does, however, also entail some negative aspects: Back in the day when everything was not digital yet, you had more time to develop something. Nowadays, everything is faster. This means: Ideas also have to be created faster.

You have been a SUISA member since 1986. What are the membership benefits for you as a composer?
I can rely on the fact that I receive a basic income. Well it is actually my main income. I could not live from the films themselves, the fees I receive for them, directly. It’s the royalties that guarantee that the balance sheet works out at the end of each year. Some colleagues say to me that I ought to change over to GEMA because many of my works are shown in Germany. I am not sure whether I would ever change. SUISA isn’t such a huge institution; people can therefore react more quickly.