James Gruntz recently released his new album “Waves”. An important role in the creation of this album is the composer in residence year that the 30-year-old songwriter, multi-instrumentalist, producer and singer has been granted by FONDATION SUISA. Text by guest author Markus Ganz 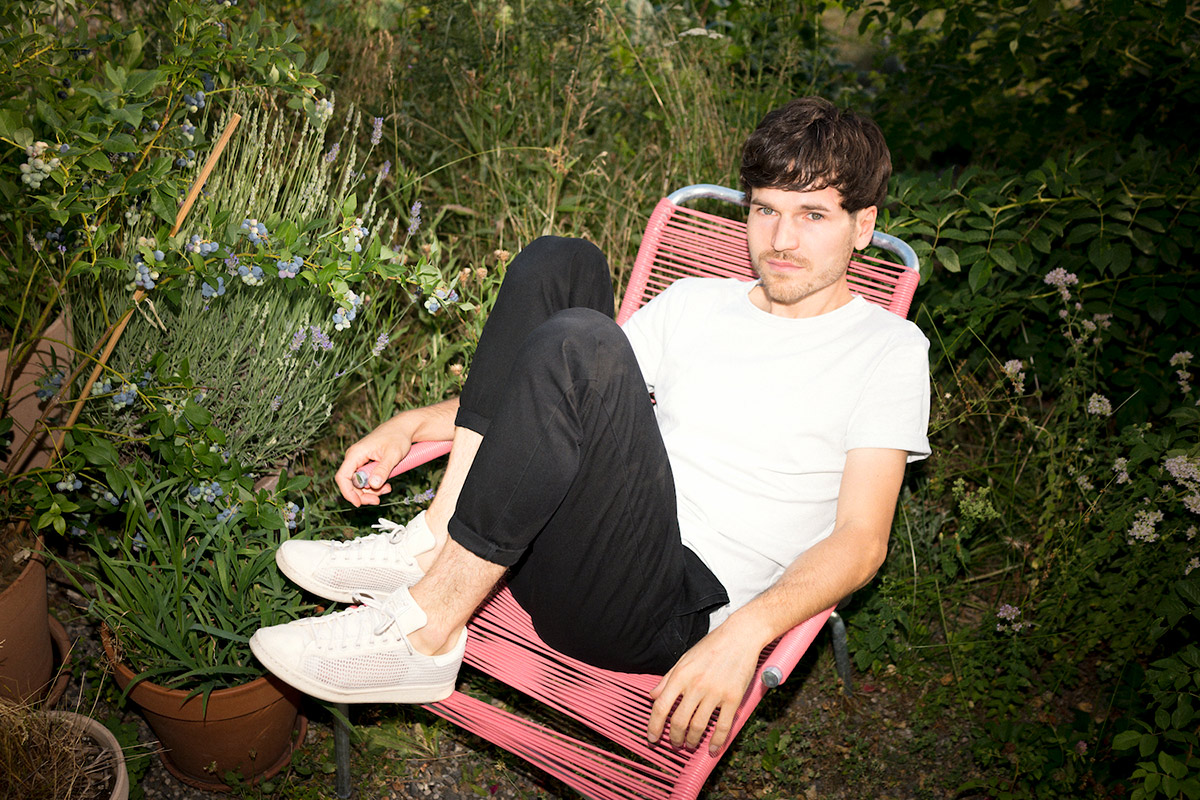 “It’s a reality that I earn a living with the concert fees and remuneration from the collective management organisations”, explains James Gruntz. (Photo: Gregor Brändli)

With the album “Belvedere”, James Gruntz managed his breakthrough in 2014, corroborated by great chart positions and several awards (“Basel Pop Awards” 2014 and two “Swiss Music Awards” 2015). For the creation of the recently published follow-up album “Waves”, the pressure probably increased for the musician; he grew up in Nidau near Biel, came to Basel at the age of 16, passed his Pop Master degree at the Zurich University of the Arts and is now living in a factory loft in Dulliken near Olten, working on his songs.

James Gruntz puts this pressure into perspective during an interview. “Music has always been a very important part of my life – and it’s going to stay that way, completely irrespective of whether I can earn my living with it or not.” The songwriter, multi-instrumentalist, producer and singer also highlights that his début album was already released ten years ago and that the recently launched album “Waves” is already his sixth. “There was a continuous development: At some point, my songs were played on the radio, and there were more and more engagements and concerts. And so far, reflecting this continued development, each album sold more copies than the previous one.”

The joy of scat

Next, James Gruntz makes the jarring comment that he was glad not having to be part of the golden era of the music industry. “As a consequence, I do not have huge commercial expectations in the album format. It’s a reality that I earn a living with the concert fees and remuneration from the collective management organisations.” His financial position is balanced because he is author, performer and producer, all at the same time, for his songs. In terms of his album sales, his only expectation is that he is able to cover the related costs.

Luckily, James Gruntz still realised the new album “Waves”, since it captivates the listener with an enchanting mix of soul, pop and electronic music. He didn’t have a vision of what his new album would be like when beginning its creation. “The only thing that was clear to me was that, just like in the case of the last album for the piece ‘Heart Keeps Dancing’ I wanted to do something again with scat vocals.” That was when he tried out this special tongue clicking technique for the first time and it found a lot of positive reception. And since he really enjoyed this “extremely”, he wanted to pluck the courage to do more on the new album in terms of this type of music.

Not in it for his own sake

The idiosyncratic use of his voice has an even bigger impact on the music than on his last album, this is also due to the falsetto he uses which is reminiscent of Prince at times, and due to the harmonizer singing for several voices which creates a peculiar alienation. “The playful manipulation of singing is something I simply enjoy very much. It’s important, however, that you don’t just do it, because you can or because it’s technically cool. It has to be able to function by itself and make sense.” At the end of the day, the voice imparts a high recognition value to the album.

The new pieces were created in rather different ways. James Gruntz always carries a Dictaphone on him and records ideas with it. Every now and then he listens to these recordings and searches for ideas “where I feel like developing something from it.” This is when he works on this idea at home alone in his home studio until the song form has been established. “I think it’s particularly exciting when I don’t know which direction a song is going to take. Only when I am aware of that, when I have found my version, that’s when I look for collaboration with other musicians – and I am open to their ideas and input.”

He had the idea for the first single, “You”, as early as three years ago, in other words, shortly after the release of the last album. “This piece has been subject to some enormous development before it was finished, it actually became rather different.” Other songs such as “Waves”, were more or less plucked out of thin air and nearly completed within just one day. “This piece is still the demo to some extent. That was possible because it is closer to a mood than to a song and therefore it was more limited in terms of enhancing it.”

The composer in residence year valued at CHF 80,000 that James Gruntz received from FONDATION SUISA in 2016 played an important role in the making of the album. “Waves” was actually meant to be released this spring. “I realised, however, that I needed more time in order to design the album in exactly the way I envisaged it to be. That’s how I was able to postpone the release of the album by half a year without starting to panic that my bank account would drop below zero.”

Is the book the new CD?

The composer in residence year also made a rather special project possible: James Gruntz will publish a 64-page book in time for the tour. “It’s an experiment that I would have had to think about twice without the money from the FONDATION SUISA.” For each song of the new album, a male or female author was asked respectively to write a text, but without any instruction. “What came out of this were poems and stories which are very interesting for me, too, as they show what my music can trigger.”

Behind this book project is the contemplation of James Gruntz that “the CD is, despite its better sound quality, on a downward spiral.” He is still convinced, however, that the majority of the people wish to continue holding something in their hands when they listen to music, just like him. “And a book is a much nicer object than a CD! It also contains the song lyrics; that is good for those listeners that are streaming my music.” The project was also made possible due to the fact that his album is released by the publisher Zytglogge which also includes books in its assortment. That is why James Gruntz can now look forward to his music coming into the bookshops he loves so much since the book also contains a download code for his album (the book is also going to be sold at his concerts).