More than 100,000 companies in Switzerland use music, TV and films for background entertainment purposes. For these usages, the companies pay a fee based on Common Tariff 3a to authors, publishers, performers or producers. How and to whom are these revenues paid? Text by Giorgio Tebaldi 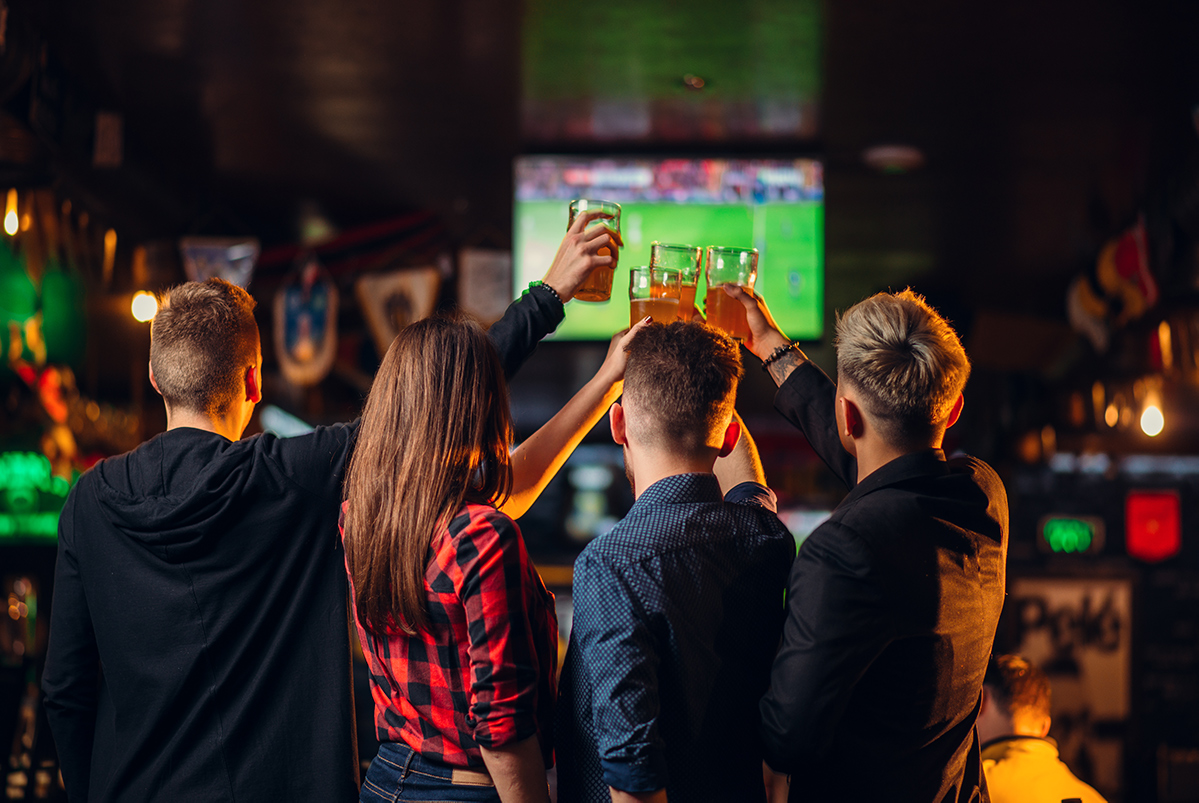 Considered by many to be part of the pub atmosphere just like teak furniture or dartboards: premier league games on the telly. Producers of the broadcasts have the right to receive a remuneration for usages outside domestic and private circles or home life. (Photo: Nomad_Soul / Shutterstock.com)

Just like lighting or decoration, suitable background music is an important contributing factor to make customers and guests feel good in a shop, hairdresser or restaurant. Plus, live transmissions of a football or cricket match are equally part of the interior décor of a pub, just like dark furniture, wooden shields and the dartboard.

Similar to the obligation to pay makers of the furniture, the decoration or the lighting, composers, lyricists, performers, scriptwriters or producers are entitled by law to receive a remuneration for the use of their works and performances outside the private circle. The five Swiss collective management organisations Pro Litteris, SSA, SUISA, Suissimage and Swissperform are responsible for this task. SUISA collects the remuneration for the use of music, films and TV broadcasts pursuant to the Common Tariff 3a (CT 3a) on their behalves.

What does SUISA do with the collected money from background entertainment?

The first step is that the collected money is split among the five Swiss collective management organisations based on a fixed distribution key. The SUISA share for the coverage of music contents is slightly more than half of the income. Each society is then responsible in a second step to pay out these collected fees to authors and artists, publishers and producers.

In the case of SUISA, 88% of the above-mentioned fifty percent is distributed to the rightsholders. This means that of the CHF 100 that were collected, CHF 88 are paid out to creators and their publishers.

In the case of the CT 3a, the money is nearly exclusively paid by way of a lump-sum without programme material. Submitting and processing the work lists in this category would be linked to an enormous effort for customers and SUISA alike, and they would be in no proportion to the actual benefit. Instead, SUISA uses the programme material already available from various sources to allocate the collections made on the basis of the CT 3a. SUISA ensures during this process that lists and/or usages are considered for this allocation, enabling that the remuneration is distributed as fairly as possible.

Based on empirical data there are cases where it is assumed that a major part of the companies, shops, restaurants etc. uses works which are also broadcast on the radio, resp. TV. Accordingly, a major part of the income from CT 3a is allocated on the basis of the programme material for the use of music, TV broadcasts and films from radio and TV transmissions. SUISA also takes into account that not just pop, rock or urban is played but also other genres such as traditional or folk music and even church music. A part of the collections is thus also distributed on the basis of programme lists for church performances, brass music or yodelling clubs.

SUISA distributes four times a year. In 2018, more than CHF 132m were paid out to composers, lyricists and publishers of music.