One of the three nominees for the Prix Walo 2018 in the folk music category is the formation Ils Fränzlis da Tschlin. With their line-up consisting of Domenic and Curdin Janett and their daughters Anna Staschia, Cristina and Madlaina, they have been making music since 2014, loosely based on the “original Fränzlismusig” of the 19th century. At the 44th Prix Walo, SUISA awards the prize for the folk music genre, and has sent some questions on their music, creating compositions and their nomination in writing to Madlaina Janett, the viola player of the formation. Text/Interview by Sibylle Roth 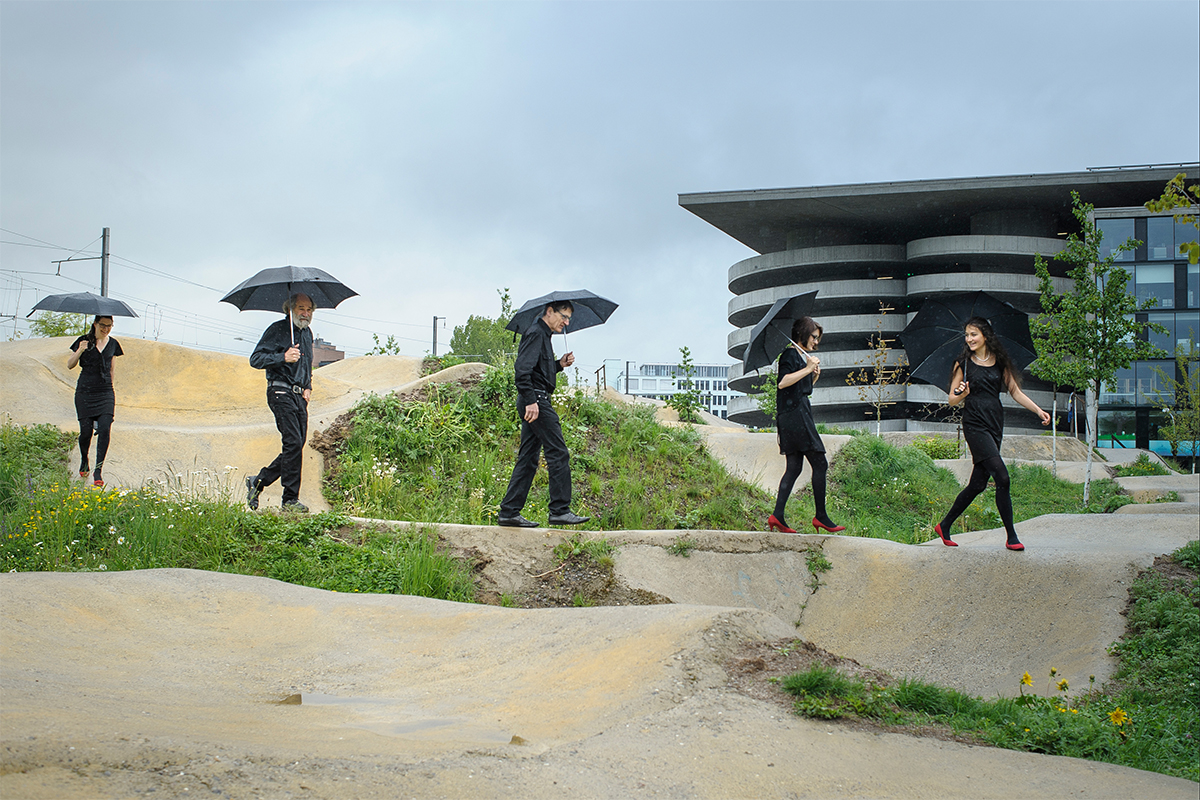 Ils Fränzlis da Tschlin: “We are ambassadors of such pieces which got stuck during their journey through the ballrooms of Europe in the Engadine”. (Photo: Flurin Bertschinger)

The original Fränzlis from the 19th century were brought to life by Franz-Josef Waser who – due to his short stature – was called “Fränzli”. They played dance music and people were talking about the legendary Fränzlis all the way into the 20th century. The new Fränzlis were founded in 1982 by Men Steiner and Domenic Janett. Since 2012, their line-up consisted of clarinet, violin, cello, viola and double base. After the latest changes in their line-up – Cristina joined for the cello and Anna Staschia for the violin – the women are now outnumbering the men in the formation.

Madlaina Janett, Ils Fränzlis da Tschlin have been ambassadors for Engadine dance music. What is the ratio between traditional works and own compositions in your ensemble?
Madlaina Janett, Ils Fränzlis da Tschlin: If we put together a programme for a concert, we attempt to fill it about fifty:fifty with new compositions – by ourselves and other composers –and traditional dances. When we do this, we don’t pursue the objective to renovate or modernise tradition. We just want to have a nice dramaturgy in the concert which offers a lot of diversity and where we are able to surprise the audience every now and then with some unfamiliar tunes. When we play our music on dance occasions – something that’s unfortunately rather rare these days – traditional pieces prevail, since they are better to dance to than new compositions which have often been and are being composed for concert situations.
At this point, we would also like to comment on the key word “ambassadors of Engadine dance music”: We would not describe ourselves as such. On the one hand because we play – as mentioned above – only rarely at dance occasions, and on the other hand, because it’s hardly possible to say what exactly “Engadine music” is supposed to be. Our role models, the original Fränzlis of the 19th century, weren’t even from the Engadine – they were from central Switzerland – and played all sorts of music: from absolutely popular hits via operetta melodies to traditional waltzes. And if you investigate into the so-called ‘traditional’ songs a little more, you often realise that they have had a long odyssey through the dance halls of the entire Alpine region and that it’s absolutely impossible to say whether a piece had been created in the Engadine or rather in the Burgenland, or in Italy. So maybe we are ambassadors of pieces which have stayed behind after their journey through the dance halls in Europe and have been refined in the style of the local musicians.

How do you proceed when you composer new pieces? Your works have often been composed by somebody alone; do you have different approaches?
The approach of each individual Fränzli members are rather different: Curdin and Domenic compose and arrange much on behalf of the widest variety of instrumentation. The younger generation composes in a more spontaneous fashion: If you think of something, you write it down. For the Fränzli programmes, we usually do not have any specific pressure to compose anything. Each of us comes up with a piece of music or a melody once in a while. You bring the finished piece along or the fragment into the rehearsal and then we try out together whether it fits in with our formation or not. This is, by the way, the same approach we take whenever we incorporate works by composers into our programme who do not play with us.

The two oldest and the youngest member of the current formation are SUISA members, whereas you and Cristina aren’t. How so? Are you not involved in the compositions?
Actually, that’s merely a sign that Cristina and I were simply too lazy to look after SUISA matters.
The two compositions we’d each have to register would not really create such an immediate call for action. But that may yet happen …

What does the Prix Walo nomination mean to you?
To be honest: We’re still unsure how someone picked us.
We have – so far – associated the Prix Walo with the big show and TV world, with glitzy dresses and dirndl and not with a formation like ours which nearly always appears in small places, without amplifier and dressed in black.
But of course we are really happy that someone thought of us and and that there is a perception for us even though we do not conform to many of the requirements of the show and entertainment scene.