Chromatic, cheerful and charming – thats the sound of Carrousel’s chansons. Hard to imagine that they are created in the sparseness and solitude of the Jura landscape rather than in the backstreets of Paris. Text: guest author Markus Ganz; Video: Manu Leuenberger

“At the beginning of our cooperation, we tried working from Paris”, Sophie Burande laughs with her crystal-clear and yet warm voice. “Thanks to a stipend of the Canton Jura it was possible for us to work and live in Paris for half a year.” She and her life partner Léonard Gogniat found the energetic lifestyle, just as the rich cultural offering, rather stimulating. “But in the end, we preferred to come back to Switzerland.”

Residence in Jura suitable for concentrating on working on their music

Not far from Delémont, the two musicians found better conditions. “We have everything we need for ourselves and for the music here, comfortably close together,” explains Sophie Burande. Unlike in a city, they can afford much space here, even for storing their live equipment. “We can also make as much noise around here without disturbing the neighbours. And the forest isn’t far, so we can go for a walk occasionally.” According to Léonard Gogniat, however, the main reason, however, is “that we grew up in the country and feel more comfortable in nature.” As it happens, he grew up in the Franche-Montagnes, just round the corner, while Sophie Burande has her roots in the French Auvergne. It’s obvious that she feels just like at home round here, as the landscapes are very similar.

The converted apartment in Courtételle has stood the test as a place of retreat where they can concentrate on working on their music. “We take many impressions home with us from our tours, and can calmly organise them and use them as a basis for our songs”, adds Léonard Gogniat. This doesn’t mean that the music only gets created round here. For their current, third studio album “L’euphorie”, the two also went to the South of France and to Amsterdam for one week each in order to “get out of our usual surroundings and integrate new influences.”

Lyrics and music combined during composing

Starting point for a new song can be a graffiti on a wall or a sentence in the newspaper, explains Léonard Gogniat. “This leads me to an idea and then a theme and then I start looking for words. And since the guitar is never far away I start playing new chords which morph into the base for a new song.” Then, the two look for a suitable melody together. “It sometimes helps to play the chords repetitively on a toy piano”, adds Sophie Burande. She also explains why music and lyrics are so closely connected for her. “When words come to my mind, I must be able to sing them in my head straight away and that’s how a concept for the melody arises. It is possible that the latter completely changes as it has to suit the lyrics, after all.”

Sometimes the two don’t like a demo version of a song anymore, created in this way. “Then we try to keep the lyrics and change the instruments and the arrangements instead”, elaborates Léonard Gogniat. “This way, several versions of a song are created with the same lyrics; sometimes you don’t recognise the original song any longer.” He explains this priority of lyrics over music with the use of the mother tongue, as it already exhibited some sort of musicality. “We sing in French because we want to say something and convey feelings, as well as a certain kind of poetry. The lyrics do, however, not tell you how to think or act. They are more open-ended, so that the listeners can create their own images to the lyrics.”

Origin and elaboration of the songs in a ping-pong process 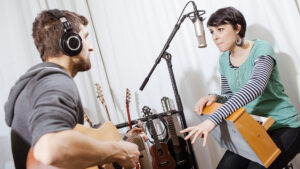 For their current album, “L’euphorie, Carrousel has worked with a producer for the first time. “We arrived at a point where we wanted to step away from the first two albums in order not to be repetitive”, states Léonard Gogniat. “We had hit a limit regarding the possible use of additional instruments and arrangements.” The two chose Jean-Louis Piérot, as he is a musician himself and has already worked with artists such as Bashung, Etienne Daho and Miossec, whose music they love. And their expectations have come true “even when we were often surprised about the new colours our songs adapted.”

Their cooperation was like a ping-pong process, Léonard Gogniat recalls. “We first sent Jean-Louis Piérot the basis demos which we had only recorded with guitar and voice. The producer then added some parts and sent us the songs back. We thought that some of it was great, but amended other parts and sent it all back with more suggestions.” It continued to go to and fro – and finally to the studio.

The ping-pong process wasn’t new to the two as Léonard illustrates by way of an example. “When Sophie has created song lyrics, she comes to me with them. I may be able to provide the suitable music. We continue to attempt bringing those parts together until it fits.” Sophie Burande adds that this process also helps “to loosen blockades and to enrich the music as all parties – including the producer – can thus bring their special qualities to the table”.

SUISA – a partner for the means of subsistence as professional musicians

Since 2012, the two can live “solely off the music, our passion”. Sophie Burande’s words do not just convey pride but also relief that they no longer have to reject concert requests due to side job obligations as they used to. The international arena has quickly gained in significance for Carrousel with regards to concert tours. It is even more important for Lénard Gogniat that “SUISA is a partner which takes care of the remuneration.” He also puts it in perspective: “The SUISA settlements and pay-outs are more like a bonus for us.” Sophie Burande thinks it is important that “SUISA ensures that the work nobody sees – writing and composing – gets acknowledged.”