The newcomer Nickless and the renowned producer Thomas Fessler won the first award for songwriters at the Swiss Music Awards 2016. The winning song “Waiting”, jointly composed by the two, didn’t appear out of thin air but is the result of lots of teamwork. At the occasion of the Swiss Music Awards 2017, SUISA will honour the performance of composers and lyricists with an award again.

The first award for songwriters at the Swiss Music Awards was granted to a newcomer and a “veteran”: The 21-year-old Nickless from Zurich, and the producer Thomas Fessler received the award for the jointly composed song “Waiting”.

On top of the necessary inspiration, a lot of work went into the song over a long period of time. “Waiting” reached 14th place in the Swiss single charts in April 2015 and was granted the Swiss Music Award in the category “Best Hit” in 2016.

For the first time, and in collaboration with SUISA, composers and lyricists were honoured in the course of this award category in 2016. By introducing an award for songwriters at the Swiss Music Awards, the audience would realise that songs don’t appear out of thin air but that a lot of work, heart and soul, said producer Thomas Fessler during an interview. Nickless was particularly happy about the recognition he received for the work as a consequence of receiving the award.

Andreas Wegelin, CEO of SUISA, adds: “Behind every big hit there are composers and lyricists. It is important for SUISA that the work of these authors will be honoured at the Swiss Music Awards.” As a consequence, the award will be granted to the songwriters of the winning title in the category “best hit” in 2017 – for the second time.

The following artists and songs are nominated in the category “best hit” and thus also for the award for songwriters at the Swiss Music Award 2017:

The award for songwriters is granted in the name of SUISA, the Cooperative Society for Music Authors and Publishers at the occasion of the Swiss Music Award ceremonies on 10 February 2017 in the Hallenstadion in Zurich. 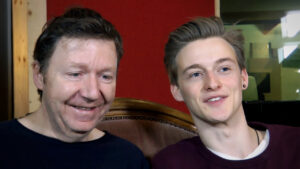 SUISA is a member of the Press Play association. The association, founded in 2012, is official sponsor of the Swiss Music Awards.