In May, five young folk music performers under the direction of Dani Häusler in Crans-Montana in order to compose a hymn for the Swiss Folk Music Festival 2019 (EVMF). The composition weekend, initiated by SUISA and run in collaboration with the organising committee (OC) of the EVMF was a complete success. Text by Sibylle Roth and Manu Leuenberger; Video by Sibylle Roth

Whereas Hanspeter Zehnder created the commissioned composition of the hymn for the Swiss Folk Music Festival in Aarau in 2015 on his own, this year’s intention was to back the next generation. The musicians were selected and contacted by the OC of the EVMF. “In the beginning, I thought that there was some mixup and the inquiry for the composition weekend had been sent to me by mistake. But now I am very honoured and over the moon”, said Alessia Heim in the interview.

During the selection process, care was taken to have the most common instruments in folk music in the representation. It thus followed that Eva Engler, clarinet, Alessia Heim, dulcimer, Jérôme Kuhn, double bass, Florian Wyrsch, Schwyzerörgeli (a diatonic accordeon) and Siro Odermatt, accordeon, met in Crans-Montana on a Saturday morning in May.

Some of the young people already knew each other and had been performing together, whereas for the others it was the first experience of playing outside their usual formation. Apart from Siro Odermatt, who has been a SUISA member since 2017 and has already composed several pieces himself, the young musicians had no big experience in terms of composing. As a consequence, an experienced folk musician, namely Dani Häusler, was hired as the director of the weekend. Even for such an old hand in the trade this was no everyday task: “The biggest challenge was to have the courage to come to this composition weekend without any preparation”, he revealed afterwards. 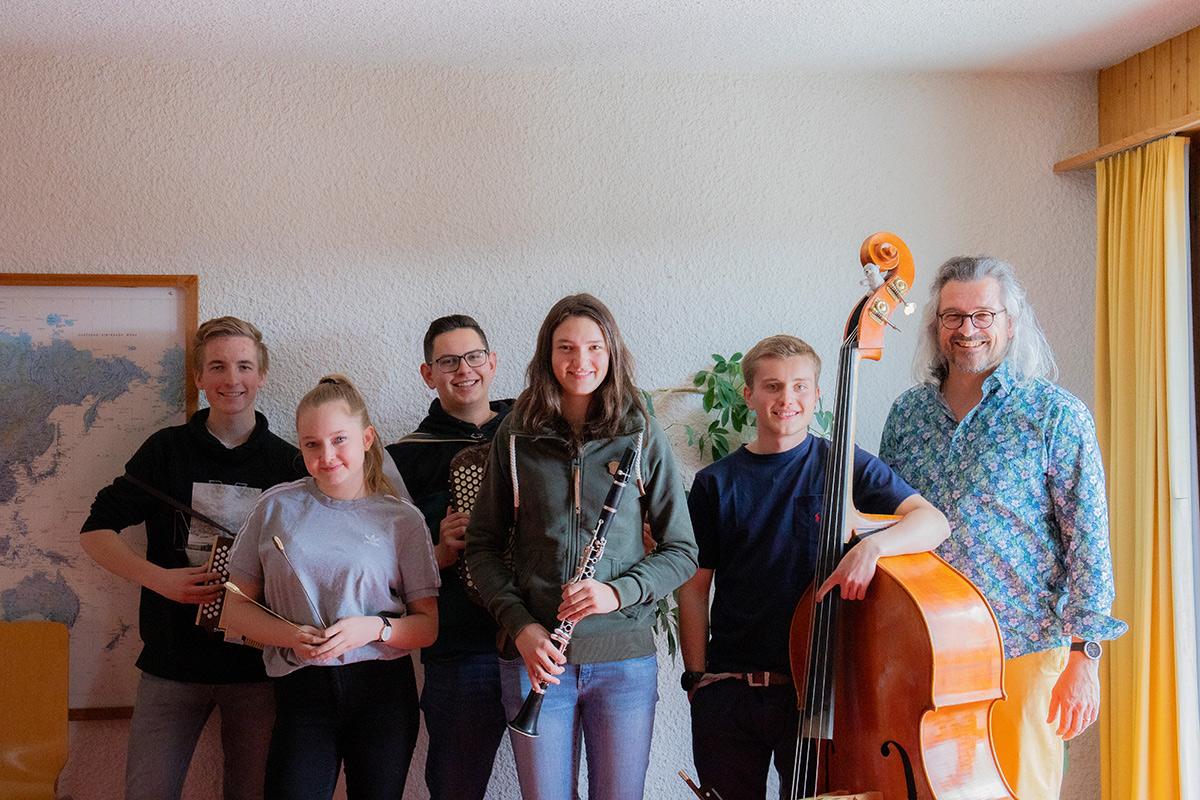 Starting with a blank sheet of paper

Before the first notes sounded from the instruments that the musicians had brought along in the seminar room of the hotel “La Prairie”, where the workshop took place, the group sat down at a table and literally started their work with a blank sheet of paper. The first exchange of ideas was influenced by indeterminate ideas and insecure feelings: A hymn – that’s a big word. What is that supposed to be? How is that supposed to sound? What is expected of us? How are we going to go about it? What kind of dance style is suitable? Where do I find melodies and chords? And: Will we really manage to finish a piece by Sunday?

Workshop director Dani Häusler set the group thinking, bundled up questions, they were jointly looking for answers, ideas and thoughts were put to paper, ideas were firmed up, and soon enough a basis for the piece was defined – still on paper though.

After initial discussions on a suitable dance style, the “Schottisch”, the “discipline for kings” was chosen in the end, says Jérôme Kuhn. On top of that, the group wanted to have some lyrics so people could sing along. 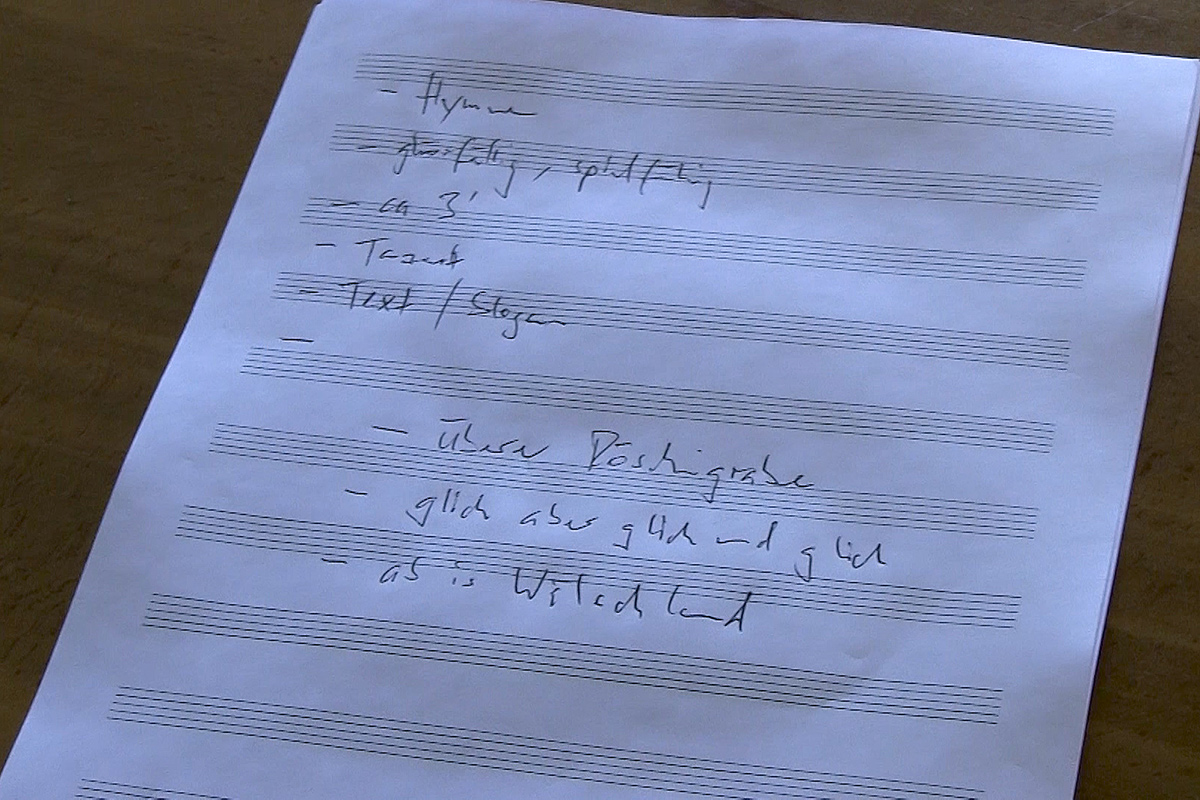 First ideas were put on paper for the piece.

After that, the group played their instruments for the first time: The young people sat together in twos or threes and jointly collected musical ideas. Whatever they had worked out in small groups was later on presented to the full circle and complemented with potential supporting voices. However, as it is the case sometimes, inspiration doesn’t always want to flow when it is expected to. “We had some start-up difficulties, but suddenly it did function”, Eva Engler said in an interview.

The respective musical breakthrough which was worked out in the following for the finished piece, was possible with Siro Odermatt’s compository experience. “I often play pieces that already exist and then meander towards other melodies, that’s how I then find my own composition”, says Siro Odermatt. Thus, after the initial start-up difficulties, the sparkling idea was found on Saturday afternoon, and the framework for the hymn had been finalised by dinnertime.

Said framework also included the draft for the lyrics of the piece, from which, apart from the title exclamation “Ab is Wälschland …!”, a robust recitative immediately sticks to your memory: “Glich oder glich ned glich – the same or not the same after all”. Jérôme Kuhn mentioned the following in the interview: “All over Switzerland, there is folk music, but in many regions there are various styles.” Whether “the same or not the same after all”, that’s for the curious to find out at the upcoming Swiss Folk Music Festival in Crans-Montana. 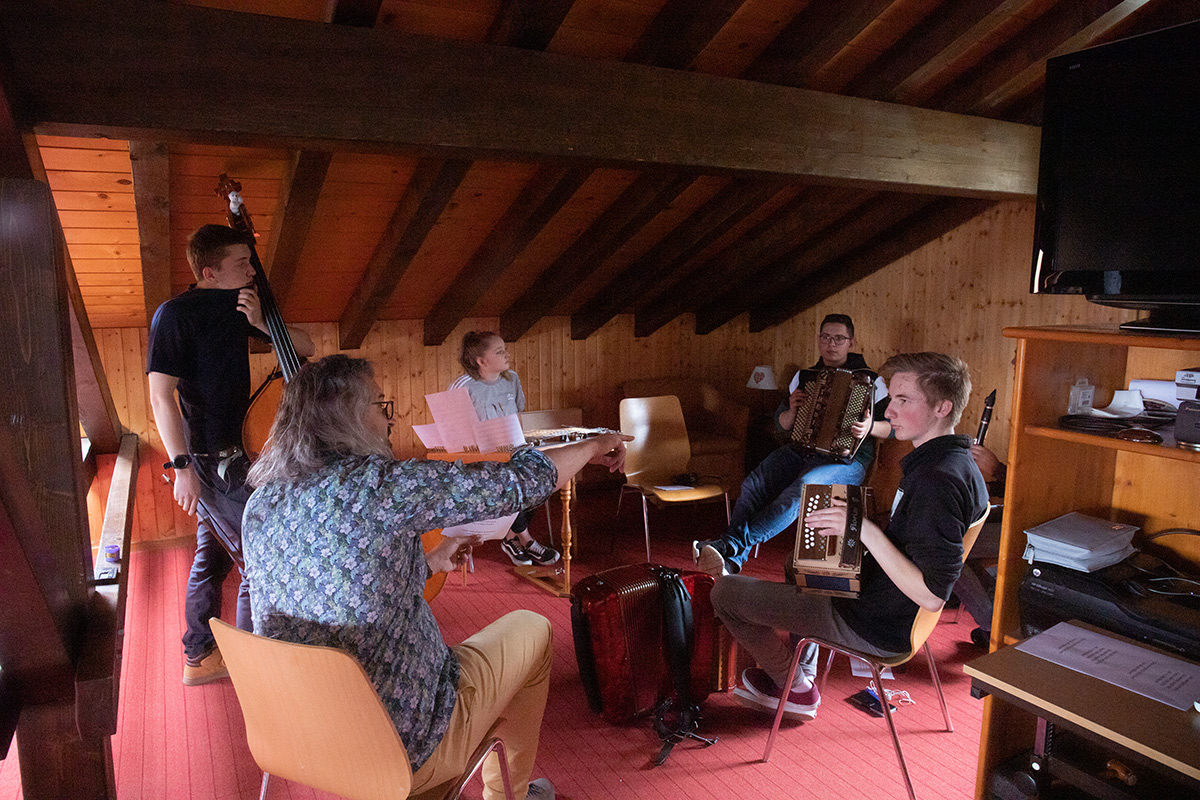 The formation “Wälschland Express» during their work on the piece.

On Sunday morning, work continued on the individual parts of the piece especially with regards to the arrangement. Whether in groups or alone, musicians practised their individual voices. Dani Häusler provided helpful tips and supported the group with advice and assistance whenever it was necessary to resolve a bit of confusion with varied musical keys or problems with finding the instrumentation and voices. 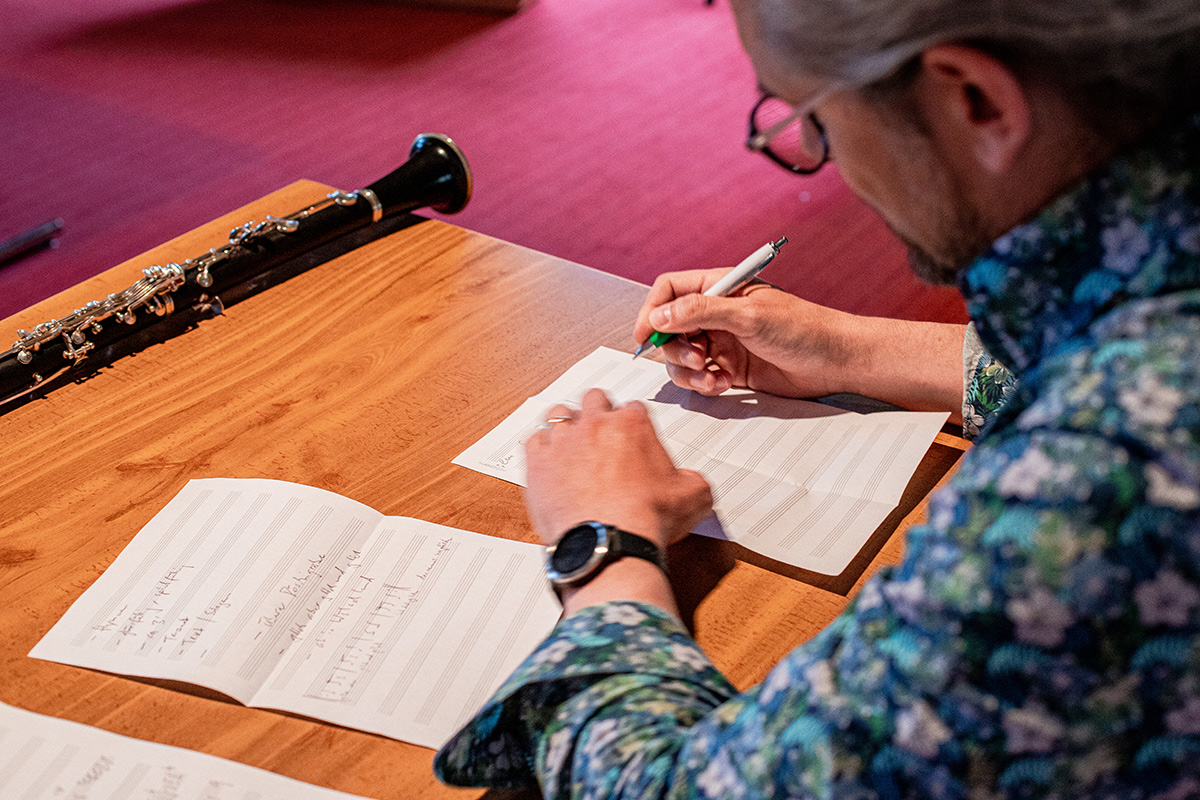 Dani Häusler writing the first lines of the sheet music.

Once all voices of the individual instruments had been finalised and once Dani Häusler had created the sheet music of the piece, the newly created work was then heard as a whole for the first time. During further practising rounds, it was constantly refined. “It is a piece ‘appealing to the auditory senses’ which has something unique and is yet suitable for a wider audience”, states Siro Odermatt towards the end of the successful composition weekend.

All parties involved are very satisfied with the final result and look forward to the Swiss Folk Music Festival in September. Regarding the question what he was hoping for the piece, Dani Häusler replied: “The most beautiful thing would be if the piece were to be played in the streets by other formations that are appearing at the festival, and if it was already known to people through broadcasts on the radio.”

Arrangement of works in the public domain – Before you start arranging musical works that are not protected by copyright, it is worth being aware of the legal pitfalls in order to avoid costly stumbles. Seeking inspiration from others, arranging existing works for different instrumentation, incorporating all or part of existing compositions into new works … these are age-old practices. What pitfalls have to be avoided when you undertake a musical arrangement? Read more