The FONDATION SUISA, SUISA’s non-profit music foundation, celebrates its 25th anniversary this year. Since its formation in 1989, it has supported Swiss music activities at home and abroad with more than CHF 36m. Founding member Roy Oppenheim casts a personal glance back on the journey in the SUISAblog. 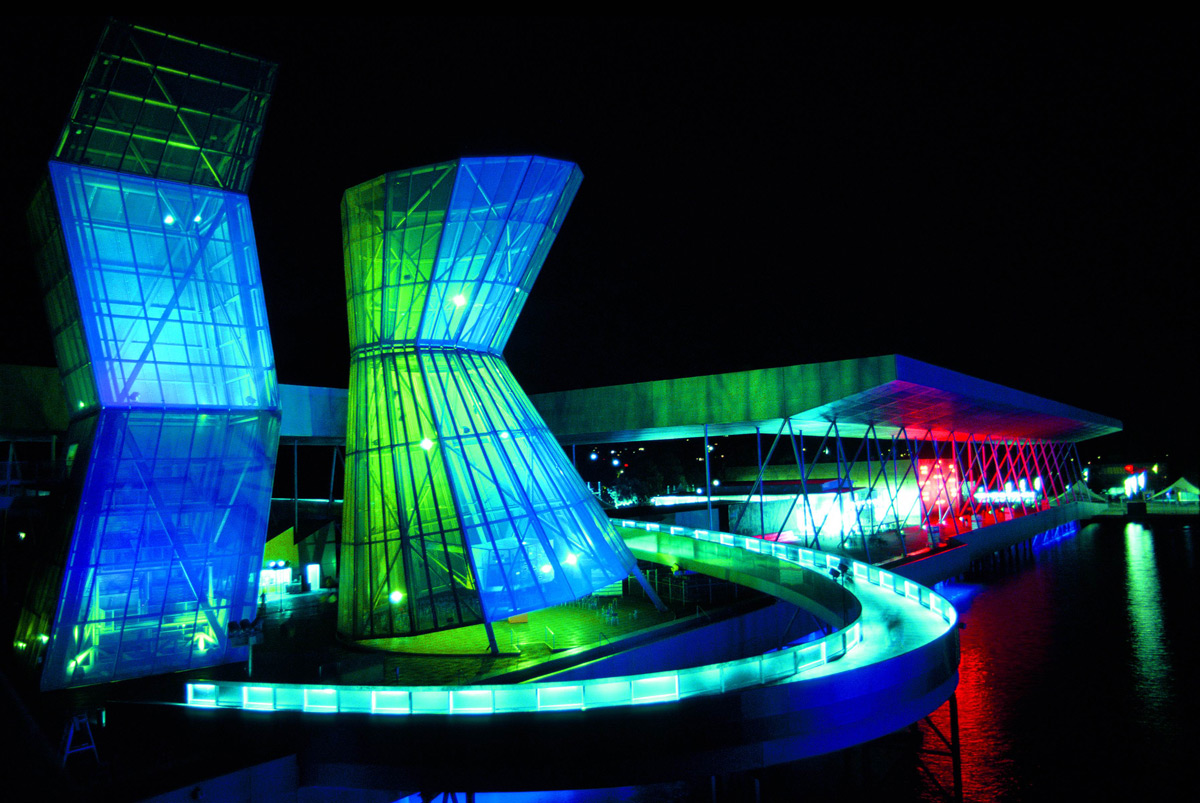 The Klangturm at the Arteplage Biel was the sounding landmark of the national exhibition Expo.02 and was financed by FONDATION SUISA and SUISA. (Photo: Felix Eidenbenz)

It was Ulrich Uchtenhagen (1926-2003), the then SUISA CEO who called me in the summer of 1988 and asked me whether I wanted to support him with the formation of a new cultural foundation. As he retired in the same year for reasons of age, his successor, Patrick Liechti (1950-1997) continued the task to that the SUISA foundation for music could be called into life in 1989.

Make Swiss music known all over the world

I was active as a Director at Swiss Radio International and due to the revolutionary events in Europe (Fall of the Berlin Wall in 1989), I strived together with Urs Frauchiger, the then Head of Pro Helvetia, to make Swiss music known all over the world. We wanted to continue the legacy of Lance Tschannen, the tireless inspirer of Swiss music life. Tschannen was the initiator and producer of the Swiss music anthology “Musica Helvetica” which was supported by SRG and SUISA.

I met important protagonists of copyright as well as music such as Hans Ulrich Lehmann, Carlo Florindo Semini, Julien-François Zbinden, Bruno Spoerri, and Jacques Wildberger among a rather ‘young’ Foundation Board of the newly formed SUISA foundation for music. – Together with the first director, the musician Claude Delley, we tried to improve the insufficient information on Swiss music creation. After seemingly insurmountable difficulties, we managed to develop a regular magazine which we also produced electronically after the advent of the internet at the beginning of the 90ies.

Presence at the Locarno Film Festival

I am proud that we managed to win over the former regional Director of the RTSI, Marco Blaser, as President of the Jury for the Swiss Film Music Prize, initiated by the foundation. As a consequence, the SUISA foundation received a regular journalistic presence at the Locarno Film Festival. 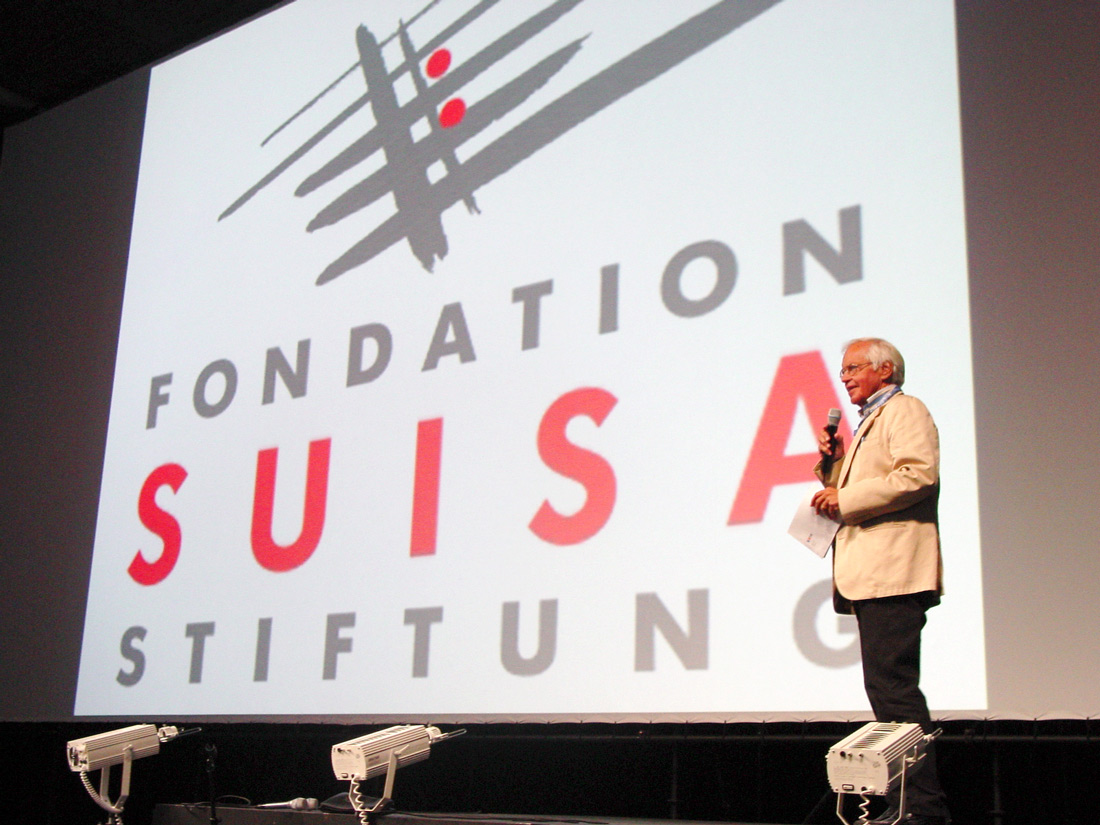 Marco Blaser, President of the Jury of the Swiss Film Music Prize of FONDATION SUISA, leads the Award ceremony at the Locarno Film Festival in 2005. (Photo: Claudia Kempf)

We faced another major event to which the foundation contributed in a major way at the beginning of 2000: the EXPO.02. We – Claude Delley, Alfred Meyer, Erika Hug and me – jointly fought for the realisation of the Klangturm at the Arteplage Biel. Success finally came with the support of SUISA and the SUISA foundation. It was a project based on an idea of Andres Bosshard, musician and sound architect. His instrument was a monumental sound tower, his score was legible on computer screens.

Whoever approached the remarkable sound tower could hear the real environmental sounds of lake and Arteplage from afar. They changed into new sound sequences and mutated to some sort of electronic murmuring and roaring when coming closer. The sounds were transmitted via 32 speakers which were installed at seven different levels at a height of 40 metres, partly hovering around, attached to giant balloons, partly hidden as subwoofers in the spectators’ benches.

The audience sat on the floor and on chairs and listened, some only briefly and curious, others for hours. It was an incredibly pleasant and peaceful image that the spectator could witness in this section of the Arteplage Biel. It is likely that the number of Expo visitors to the sound tower topped a million. It was a one-off chance to enthuse a broader population for the interests of music. 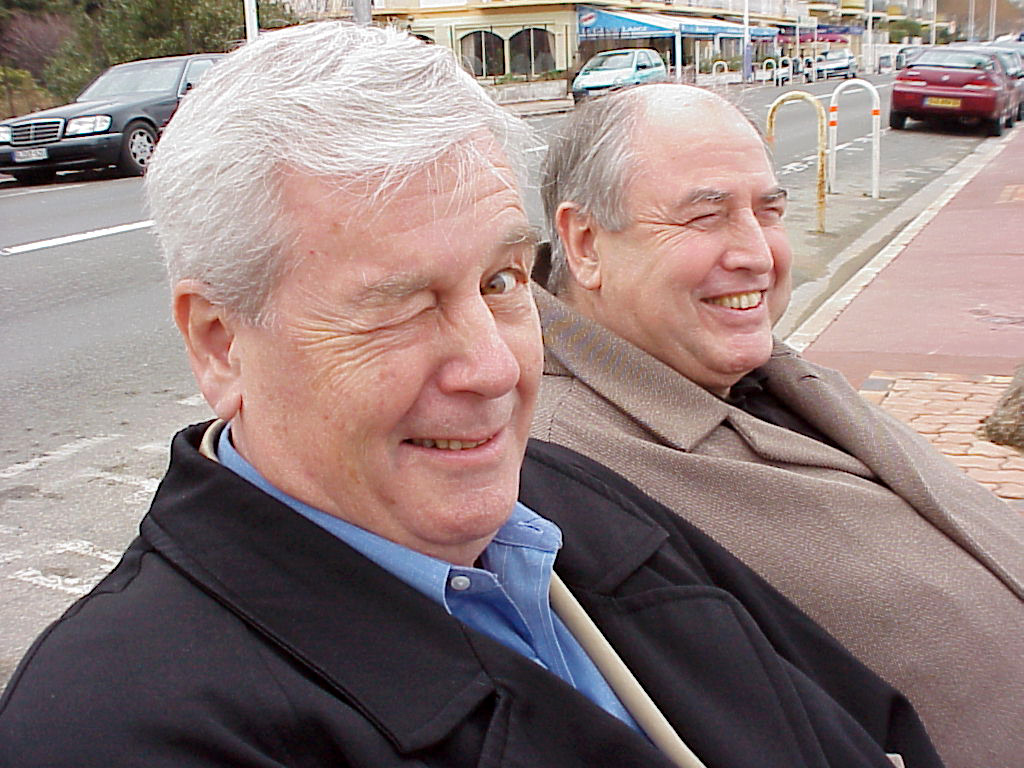 Two big names of the Swiss artistic scene: Jazz musician Georges Gruntz (on the left) and cartoonist Nico Cadsky were guests of SUISA and the SUISA foundation at Midem in Cannes in 2002. (Photo: Roy Oppenheim)

Yes, the music foundation has – apart from thousands of subventions to musical projects – written Swiss cultural history, not only due to its financial means but also thanks to many new ideas. Among these are the constant and original presence at international music fairs such as the Musikmesse Frankfurt, Popkomm Berlin or Midem in Cannes. At the latter, the biggest music exhibition worldwide, the jazz musician and publisher Peter Schmidlin organised the “Swiss Jazz Club” for five years, starting in 2000, on behalf of the foundation. It was an internationally successful event where all big Swiss jazz musicians performed, such as Georges Gruntz, Franco Ambrosetti, Kurt Weil, Erika Stucky and others. The involvement of the foundation in the successful initiative jugend + musik (youth & music) to anchor “musical education” into the Federal constitution was another courageous and successful project.

The foundation is still looking for new ways to this day in order to support Swiss composers and artists. Among these is the cooperation developed by the current foundation Director, Urs Schnell, with the audiovisual platform art-tv.ch. The FONDATION SUISA has become indispensable in our country. I would like to express my sincere thanks to it.

This guest contribution has been penned by Roy Oppenheim, founder member of the FONDATION SUISA. About the author in brief: After his studies of history of art, history and journalism, Roy Oppenheim wrote numerous books and contributed to many TV programmes as author and producer. Roy Oppenheim also led the culture sector of Swiss Television SF DRS for 13 years, was Director of Schweiz International and the fourth Channels, held the position of Communications Director of SUISA for 10 years and managed the new sculpture museum Rehmann for 7 years. Today, he is President of the Forum Helveticum and the multimedia platform www.art-tv.ch as well of various other cultural foundations.